Charting a course for women in Corporate Jamaica 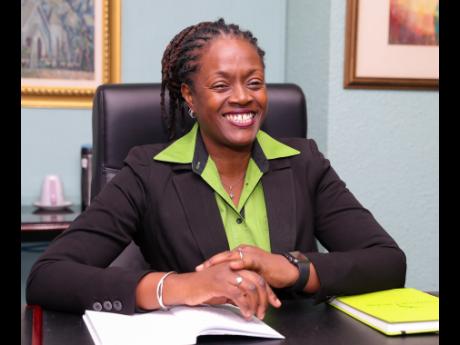 Chorvelle Johnson-Cunningham is among a new generation of brilliant women who have helped to revolutionize Jamaica’s banking industry.

It was not so long ago that educated black Jamaican women could only aspire to be tellers and clerks in the nation’s banks but along with her peers, Chorvelle has leapfrogged the male queue to become Chief Executive Officer of Sagicor Bank, an affiliate of the insurance conglomerate of the same name.

There was nothing in Chorvelle’s early career to suggest that she would end up at the helm of one of Jamaica’s banks or indeed in finance and banking. Graduating with a Teacher’s Diploma from the University of Technology, this Clarendon born and Knox College alumna, was lured away from teaching into the corporate world working first in the insurance industry.

From there she transitioned easily into Finance rising to be the Regional Vice-President of Sales and Service at Scotia DBG Investments Limited. Prior to joining Sagicor Bank as its CEO, Chorvelle was a Director of Proven Wealth Limited where she played a major role in the acquisition and integration of First Global Financial Services into Proven Wealth.

There she also had responsibility for the overall direction of the organization’s products, services, marketing, regulatory compliance and risk management.

Over the course of her 20 or so years in the finance sector Chorvelle has participated in special training courses in Pension Funds Management, Sales, Coaching and Wealth Management, among others. She holds a Bachelor’s degree from Nova Southeastern University.

Although no longer in the classroom she brings to her leadership role at Sagicor some of the essential qualities found in good teachers, among them the importance of coaching and acceptance of the fact that learning is a twoway process both for those whom you teach by leading and yourself learning from those whom you lead.

Chorvelle Johnson-Cunningham is a staunch women’s advocate and believes in the equality of men and women to the extent that men should play an equal role in reproductive care and housework, a principle she will have the opportunity to apply at home having married investment banker Vaughn Cunningham in 2019.

Chorvelle has chaired the Women’s Leadership Initiative which among its activities she and her team host a number of projects including the Darkness to Light Programme, Conversations with Boys and the Adopt a School programme.

Chorvelle has been honoured by her alma mater, Knox College and was named by Businesssuite Magazine among the top 50 most powerful and influential women in Jamaican business.

In private, Chorvelle has been a dedicated vegan for the past 10 years and is so committed to her lifestyle that she wrote and published a book entitled Simply Vegan, The Jamaican Way published in 2012.