Merlene Ottey, forever a Queen of the track 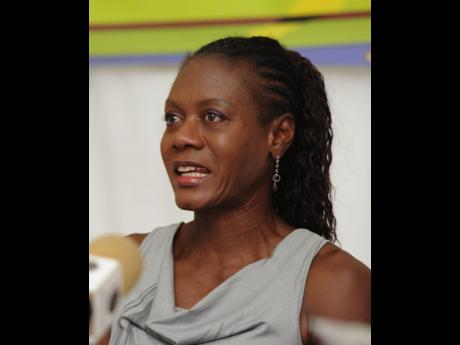 Merlene Joyce Ottey has spent a great deal of her life surrounded by the track and a cheering audience. For a large part of that life, she was considered the greatest sprinter male or female in Jamaica's history.

Ottey, from Cold Spring in the parish of Hanover, was born in May, 1960 and comes from a considerably large family. She is the fourth of seven children of Hubert Ottey a farmer, and his wife Joan, a midwife.

Ottey was destined for the track, with parents who weren't half bad on the oval themselves. The tall, slender Ottey would begin to make her mark on the Jamaican landscape at local meets where she ran her first races barefooted.

Her mother recognised her talent and journeyed with her to a track meet in the capital, Kingston, in an attempt to have her selected to represent Jamaica at an overseas meet. Not being familiar with Kingston and having no friends or relatives with whom they could stay overnight, mother and daughter slept at a police station.

She competed the next day, winning gold medals in sprints and the 4×100-metre relay.

In 1979, Ottey moved to the United States (US) and attended the University of Nebraska where she joined the track team. During her time in the US, she was briefly married to American track athlete Nat Paige. She represented Jamaica in the 1979 Pan American Games, winning bronze in the 200 metres. In the 1980 Moscow Games, Ottey became the first female English-speaking Caribbean athlete to win an Olympic medal when she, again, took the bronze. As a result of this, she was awarded in Jamaica, the National Honour of Officer of the Order of Nation, and the Order of Distinction.

Ottey was named Jamaican ambassador-at-large after her gold medal win at the 1993 World Championships. She has also been named Jamaica's Sportswoman of the Year 15 times.

In 1998 Ottey moved to Slovenia. Initially, she continued to represent Jamaica.

However, in May 2002, she became a Slovene citizen, representing her new country in international events. She competed for Slovenia in the 100 metres at the 2004 Summer Olympics where she reached the semi-finals. At age forty-six, she competed in the 2006 European Championships.  She finished fifth in the semi-finals of the 100 metres.

It is indisputable that she is a track legend in many corners of the world. Her dedication to her craft and unmistakable hard work has granted her a sizable share of medals collated throughout that career.

In all, Ottey has nine Olympic medals, six bronze and three silver, a gold just out of her reach on a number of occasions. She did manage three World Championship gold medals, four silver, and seven bronze for a grand total of 14. She also won three Indoor gold medals, as well as two silver and two bronze.

In all major competitions, Ottey racked up 15 bronze medals which gave her, maybe the unwanted title, 'the Bronze Queen'.

Undoubtedly though, for many, she's Jamaican golden queen, who laid the ground for later champions like Veronica Campbell-Brown and Shelly-Ann Fraser-Pryce.