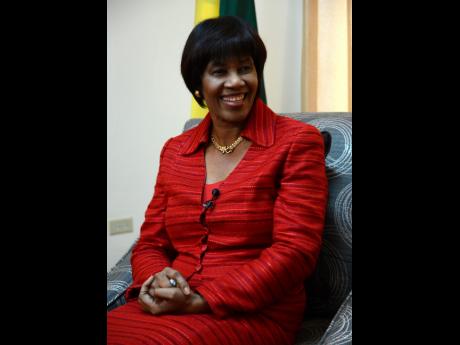 Simpson-Miller is the first female prime minister of Jamaica, when she swept into power in 2006.

Simpson-Miller, the first female president of the People's National Party (PNP), served as Prime Minister from March 2006 to September 2007 and again from January 2012 to March 2016.

Simpson Miller, born in December of 1945, is married to Errald Miller and received her formal education at the Marlie Hill Primary School, the former St Martin's High School and The Jamaica Commercial Institute.

Simpson Miller would also earn a degree in Public Administration from the Union Institute of Miami.

Several years later, in 2002 the Institute conferred an Honorary Doctor of Humane Letters upon Mrs Simpson-Miller, making her the first graduate to have received such a recognition.

This was also another success story with her winning in both the 1976 and 1980 general elections. She would go on to becoming one of the longest-serving Members of Parliament, holding on to the South-West St Andrew seat from 1989 to her retirement in 2017, a year after giving up the post of party president.

Simpson-Miller is heralded as one of the change bearers to Jamaica's labour industry, improving negotiations with workers, conditions for workers, and advancing the increase of the minimum wage through supportive legislation. She also oversaw the expansion of the Overseas Work Programme, as well as the establishment of a Labour Chair at The University of the West Indies.

The Municipality of Portmore was established under her watch and in sports, she invested heavily in local infrastructure such as the Indoor Sports Facility and in support for teams to participate in international sporting events. Noteworthy among these was the Reggae Boyz journey to France for their first World Cup final.

During her stint, as Prime Minister, the Government of Jamaica introduced free healthcare for children up to age 18, as well as accessible and affordable housing for older persons and sugar workers. One of Simpson Miller's greatest achievements has been the empowerment of members of high-poverty areas through education

Her achievements include reform to the Overseas Farm workers programme through the Overseas Recruitment Centre for Farm Workers. It was also Simpson-Miller's initiative that resulted in the significant growth in the National Insurance Fund which benefits pensioners. She also had high on her agenda the employment of youth and women.

But Simpson-Miller's story is not your run-of-the-mill success story. Her 43 years in representational politics has been fraught with challenges.

Not one to shy away from her more colloquial roots, Simpson Miller has been accused of being illiterate, or not the sharpest tool in the shed.

"In the early days, some said I could not read. [But] while some judged me harshly, I was determined to be who I wanted to be, not how others saw me," Simpson Miller has said.

"It has been quite a journey. I have endured it all - the ridicule, the victories, and defeats. But I have stood tall and remained focused," she said. "I have consistently been able to do so out of the fundamental belief that good will always overcome evil," she said on the occasion of her retirement in June of 2017.

"I had defied the odds. This girl made the journey from Wood Hall to Jamaica House," she said of her 2006 election, which made her just the third ever female Caribbean head of state.

Whatever, the individual take on Simpson Miller's prowess as a leader of this country, or as a politician, her connection to the people of Jamaica has never been replicated.

The names Sister P and Mama P are testament to that connection, a connection she has always been acutely aware of.

"While there are many significant things that I can point to and say, I did that, the legacy I am most proud of is my relationship with the people of Jamaica."