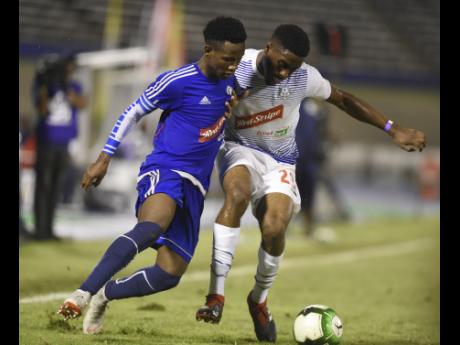 File
Mount Pleasant’s Cardel Benbow (left) and Emelio Rousseau of Portmore United in a tussle for possession of the ball during the Red Stripe Premier League second-leg semi-final at the National Stadium on Monday, April 15, 2019. The game ended 1-1.

Now that the Government has said yes to the re-start of Jamaica's top-flight football league, the question is whether or not the various organisers can put together a league in as short a time frame as there is to do so.


NEWS OF the Government's approval of the return of top-flight football in Jamaica was met with relief and excitement across the local footballing landscape, but with just a short window left for the Jamaica Premier League to take place this season, it is a race against time to get the ball rolling.

Minister of Local Government and Rural Development Desmond McKenzie made the announcement yesterday afternoon, paving the way for the return of the Jamaica Premier League, which has been sidelined since March 12 last year, when the first cases of COVID-19 were registered locally.

The Premier Football Jamaica Limited (PFJL) will announce details such as a start date, duration, and format for the competition in the coming days, but with international assignments such as the Gold Cup just over two months away, organisers must scramble to get things going as soon as possible.

Matches will be played, without fans, at the National Stadium and Sabina Park, and teams will be allowed to train at their respective venues.

Christopher Williams, chairman of the PFJL, who was locked in a meeting with the organisation's board last night, confirmed the development and the basic plans for the league's safe execution.

“I want to say, finally, ball is back, and so we are grateful to the ministers of sport, health, and local government for working with us over the last few months to get the protocols in place and to work with the different scenarios and eventually come up with a solution,” Williams stated.

According to the financial maven, the preliminary stage of the competition is likely to be played over one round, with teams then advancing to the quarterfinals before semifinals and a final are played.

“We are going to work with the JFF tomorrow (today) to finalise the fixtures for the competition,” Williams stated.

“It will be played in a sanitised environment at Sabina Park and the National Stadium. The details will also include weekly testing and a limited amount of people inside the grounds and mask-wearing for everybody except for the players on the field and the same guidelines for training ,”Williams added.

Jamaica Football Federation (JFF) president, Michael Ricketts, welcomed the news and implored those involved to show responsibility and adherence to the safety protocols.

“This is very positive news for the stakeholders of football,” said Ricketts.

“While I am sure the players are overjoyed with the news, I implore them to be constantly mindful of the current local-health conditions and act responsibly. While we play, let's play our part in containing this pandemic. Let the games begin!” added Ricketts.

The Jamaica Premier League will be held without spectators, but in a release yesterday, organisers noted that fans will be able to enjoy televised matches in Jamaica and throughout the region.

Meanwhile, McKenzie highlighted that the Government is well aware of the importance and necessity to return sports safely despite the challenges presented by COVID-19.

“Even as the management of COVID-19 remains paramount, the Government is keen for sport to resume in a phased, orderly manner, consistent with the continued reduction in the country's positivity rate,” McKenzie said.

“The impact of sport on social well-being and social development is well recognised, and the Government will support all efforts to promote the enjoyment of sport in the safest way possible. In this regard, the Government is actively considering applications from a range of sporting associations,” he added.