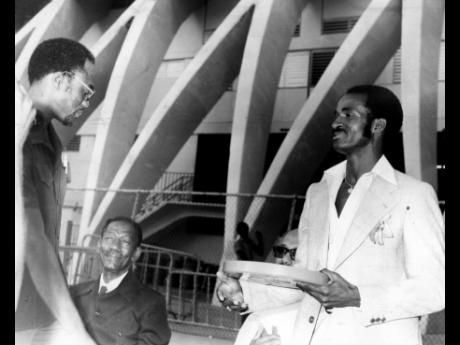 Donald Quarrie (right) proudly holds a film of important segments of his career, presented to him by the Minister of Youth, Sports and Community Development, Hugh Small (left) after the minister gave an astounding catalogue of Quarrie’s major international achievements at the ceremony marking the unveiling of Quarrie’s statue in front of the National Stadium on May 11, 1978. At centre is Dr Arthur Wint.

With the achievements of Jamaican athletes like Usain Bolt and Shelly-Ann Fraser-Pryce in recent times, and Veronica Campbell-Brown before that, there may be the tendency to forget some of the people we call heroes. That 'forgetfulness' might not be excusable once you walk through the National Stadium and see statues like the one famed sculptor Alvin Marriott completed in 1978 to commemorate the achievements of a one, Donald Quarrie.

A STATUE OF Jamaica's Montreal World Olympics gold medallist DONALD QUARRIE, sculpted by Alvin Marriot and set in bronze was unveiled by Jamaica's 1952 Helsinki Olympics 1600-metre gold medal world-record quartet in front of the National Stadium on May 11, 1978

In the ceremonial unveiling of the statue, the Helsinki four of Arthur Wint, lead-off, Les Laing, second leg, Herb McKenley, third leg, and anchor George Rhoden re-enacted the scene of their psyching the opposition into a false assessment of Jamaica's running order in the final.

Chairman of the Sculpture Committee, A.D. Scout, gave a history of the conception of the idea of putting up a statue in honour of Quarrie and highlighted the help given by firms, individuals and the Government making yesterday's function a reality.

In the most well-received speech of the afternoon, Quarrie cited the many sources from which he had received inspiration on his way, from schoolboy athletics at Camperdown High School to the victory podium at Montreal.

He paid special tribute to the influence Prime Minister Michael Manley, Jamaica's two- time Olympian Dr. Lennox Miller had on him and emphasised that, whenever he ran, he always tried to do his best in the interest of, not only himself, but for his school, his family and his country.

Minister of Youth, Sports and Community Development, Mr. Hugh Small, had as the theme of his address, the lesson implicit in the courage shown by our great athletes in overcoming the many difficulties they faced and said that resilience is needed by the nation in facing the difficulties it faces at this time.

Athletes, he said, gave Jamaica its first real taste of national pride and established the real first broad base of the Jamaican people to overcome difficulties.

The Minister also praised Mr. A. D. Scott for his contribution to the development of the arts in Jamaica, an achievement he dedicated his life to while at the same time eschewing some of the material well-being of life.

Mr. Small also apologised for the absence of Prime Minister Manley whom he said was preoccupied with matters of State at the moment.

Sculptor Marriot was described by the Minister as “a legend in our time.”

All four Helsinki 1600-metre relay gold medallists spoke: 'RHODEN calling for the youths to be given the widest chance to emulate the deeds of great Jamaicans; LAING suggesting the formation of an Olympic Club of Jamaica to vet the progress of the major local sports organisation twice in every four years and offer suggestions for building sports. WINT lauded the formation of the Institute of Sports and warned that its fruits would not come quickly and MCKENLEY emphasised the value of sports as a developer not only of the body, but of the mind also.

Dr. Mathew Beaubrun, chairman of the Institute of Sport, was chairman of the function and urged Wint, Rhoden, McKenley and Laing to set up rules and terms of reference for Laing's idea of an Olympic Club of Jamaica before the group broke up over the next few days.