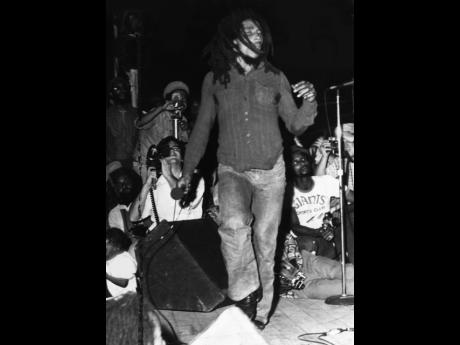 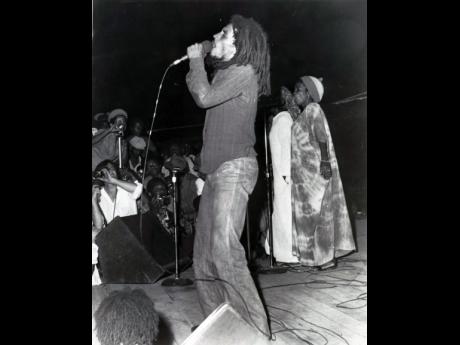 In April of 1981, Bob Marley was conferred with the Order of Merit, by May of 1981, he was dead. The fact that he was being conferred with the honour at just 36 years old, says it all. Jamaica had lost the greatest of its musical ambassadors. Here The Gleaner goes into great detail, describing, not only the popularity of his music and the occasion of his death, but also his yearlong battle with cancer.

The Reggae King was only 36

THE HON. ROBERT NESTA MARLEY O.M., the most widely acclaimed Jamaican musician ever, died of cancer in the Cedars of Lebanon Hospital in Miami, Florida on Monday, May 11.

Bob Marley, as he was known worldwide, was on his way home to receive the honour of Order of Merit which was conferred on him by the Government less than a month ago. The reggae singer was the biggest-selling recording artiste in the history of Jamaican music, having sold well over 20 million records.

His battle with cancer started some eight months ago during his last concert tour of the United States. Marley had finished the European leg of his tour and was performing in Madison Square Gardens, New York, in October last, when he fainted. His connections reported that he was suffering from exhaustion. However, it was later revealed as cancer.

Marley, who was 36 years old was returning home from Bavaria, West Germany, where he had undergone chemotherapy treatment for the disease at the clinic of Dr. Josef Issels, whose unorthodox approach to the treatment of cancer has been scoffed at by leading European experts.

The singer had stopped off in Miami because daily treatment which was required for the disease was said to be probably non-existent in Jamaica. He arrived in Miami on Thursday and entered the hospital on Friday. On Monday, May 11 he was in his room with his wife, Rita, his mother, Mrs. Cedella Booker and his attorney/business agent and constant travelling companion, Miss Diane Jobson. He requested that his wife fetch something from his South Miami home where his mother resides, but he died before she returned.

The story of his illness goes back to last October when he began treatment at the Sloan-Kettering Hospital in New York for the disease. After he was given up by the American doctors who gave him until Christmas to live, he went to Bavaria for treatment.

He stayed with Dr. Issels at Rottach-Egern near Lake Tegern in the Bavarian Alps. When he arrived there, he was partly paralysed by a brain tumour. He had cancer in the stomach, his "locks" were shorn, and he had a ban placed on his drinking alcohol or smoking. His mouth appeared twisted, and he was weak after losing a great deal of weight.

However, in an exclusive interview with John Stevenson of Associated Newspapers, he said: “Like so many other patients who come here (Issel's place), I was given up by the doctors to die. Now I know I can live. I have proved it.”

Marley was one of the world's most popular pop singers. He was also a very successful song writer, having written million-selling hits for entertainers such as Johnny Nash and Eric Clapton.

He was also a producer and businessman and owner of Tuff Gong Recording Studios on Hope Road, St Andrew, one of the largest in the Caribbean.

He was born in Rhoden Hall, St Ann, on February 6, 1945. His father was a British Naval Captain, Norman Marley of Liverpool, England who was in Jamaica during the Second World War. His mother, Cedella Booker, emigrated to the United States several years ago and now lives in Miami.

Bob, who became a welder, his mother and two brothers and a sister moved to Kingston when he was nine. They lived at Waltham Park Road and later at Wilton Gardens (Rema), Trench Town.

He started recording in 1965 and his first record was "Judge Not". Although he and his group, the Wailers, which included Peter McIntosh and Bunny Livingstone and which was formed in Wilton Gardens, made several hit songs including “Rude, Boy Ska,”, “Simmer Down,”, “Stir It Up” and “Nice Time” during the '60s, they never achieved real success until the early '70s.

In 1972 the Wailers signed a contract with Island Records and the first album "Catch A Fire", which was distributed worldwide by Island, was a moderate success. Island is owned by Jamaican businessman, Chris Blackwell, who also gave the start to the career of entertainers such as Millie Small, Jimmy Cliff and Owen Gray.

After the initial success of “Catch A Fire” the group recorded “Burning”, before they split. Bob then formed a band, including his two main stay musicians, Aston “Family Man” Barrett on bass and Carlton Barrett on drums and the singing group, the I-Threes, comprising his wife Rita, a former lead singer of the Soulettes, Judy Mowatt formerly of the Gayletts and Marcia Griffiths.

Bob Marley and the Wailers went on to make the "Natty Dread" album, and then the “Rastaman Vibrations” album which became their first million seller. Since then, they have recorded several other albums including "Survival", “Kaya” and his latest “Uprising” which was released last summer.

In April this year, Bob Marley was awarded the Nation's third highest honour, the Order of Merit (O.M.). Also in April, he was awarded a Certificate of Merit by the Gleaner Company for his contribution to entertainment.

In 1980, he was invited by the newly elected Patriotic Front Government of Zimbabwe to perform at celebrations marking Independence. In 1976 he was awarded the Deutsche Schallplatten Award by Ariola Records for sales of his records.

In 1978, he was the guest performer at the Peace Concert which was organised by the Peace Committee made up of several political gangs to try to end tribal political warfare in the Corporate Area.

In the early years, Bob Marley and the Wailers did several ballards including "It Hurts to Be Alone" and "I'm Still Waiting" as well as several Ska tunes dealing with life in general. The most popular among the latter were "Simmer Down", "Rude Boy Ska", "Dancing Shoes" and "Bend Down Low".

Tunes like "Rude Boy Ska" and Peter McIntosh's "I Am The Toughest", became anthems of the rebellious youth population of the 1960s, in a period when guns were becoming quite prevalent, Kingston was seething with rival gangs and political rivalry started to develop into bloody war. The song made the Wailers the idols of those youths, but in later years the group was to become the conscience of the young with their strong Rastafarian influence and a rigid opposition to political division which they termed "tribalism".

By the early '70s they were singing tunes like "400 years", "Jah Live" and "Guava Jelly" which appealed largely to adults, while still dealing with the explosive issues of hunger and poverty.

His last local appearance was at the Reggae Sunsplash show in Montego Bay in July 1979.