The first, but not the last, US VP wants others to follow her lead 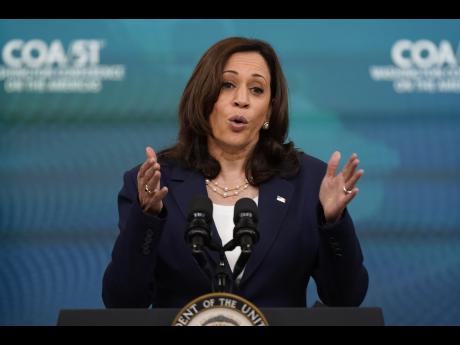 AP photo
Vice President Kamala Harris delivers remarks to the Washington Conference on the Americas from the South Court Auditorium on the White House campus in Washington, Tuesday, May 4, 2021.

When Kamala Devi Harris, attorney at law, became the 49th Vice President of the United States of America, she also became the highest-ranking female official in US History. And what’s more, she is of Jamaican and Indian parentage.

Harris was fathered by  Donald J. Harris, a Stanford University professor emeritus of economics, who arrived in the United States from British Jamaica in 1961 for graduate study at UC Berkeley, receiving a PhD in economics in 1966.

Their daughter, Kamala, was born in Oakland, California. Kamala and a sister who was born later,  Maya, lived in Berkeley, California, during and after her parents' studies.

Their parents divorced when Kamala was seven. After graduating from high school in 1982, Harris attended Howard University, a historically black university in Washington, D.C.

Harris went back to  California to attend law school at the University of California, Hastings College of the Law through its Legal Education Opportunity Program.

While at UC Hastings, she served as president of its chapter of the Black Law Students Association and would graduate with a Juris Doctor in 1989 before being admitted to the California Bar in June of 1990.

In 2003, Harris was elected district attorney of San Francisco, later becoming the Attorney General of California in 2010 and re-elected in 2014.

Harris defeated Loretta Sanchez in the 2016 Senate election to become the second African-American woman and the first South-Asian American to serve in the United States Senate.

She served as the junior United States senator from California from 2017 to 2020.

Harris, as a senator, supported legislation in healthcare reform, cannabis reform,  a path to citizenship for undocumented immigrants, the DREAM Act, a ban on assault weapons, and progressive tax reform.

Harris formally announced her run for the Democratic nomination for president on January 27, 2019.

The female politician withdrew from the race prior to the primaries.

Democratic presidential choice Joe Biden selected her as his running mate in August 2020, and their ticket went on to win the general election in November.

She stepped into the role of vice president of the United States on January 20, 2021, sworn into office alongside President Joe Biden.

According to the White House, Harris’ entire life has been about people and she has, for instance, consistently said her every action is in line with her first statement as a lawyer.

“At every step of the way, I’ve been guided by the words I spoke from the first time I stood in a courtroom: Kamala Harris, For the People.”

As the first Black-American and Asian-American woman to sit in the vice-president’s seat, one of Harris’ mandates is also to ensure she paves the way for others from her cohort to follow.

That mandate came from her mother, a breast cancer scientist and pioneer in her own right, who received her doctorate the same year Vice President Harris was born.

“My mother would look at me and she’d say, ‘Kamala, you may be the first to do many things, but make sure you are not the last.’”