Miss Lou’s legacy of pride in everything Jamaican continues 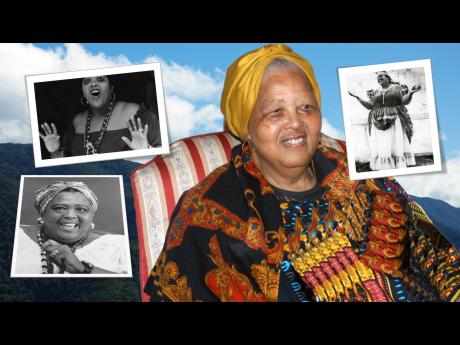 Louise Bennett, “Miss Lou, “a Jamaican poet, folklorist, writer, and educator, is the most decorated among Jamaican poets and songwriters and with good reason.

Born on September 7, 1919, Bennett is most revered for the part she played in driving home acceptancy of the spoken dialect in Jamaica and for its use as a language in its own right.

Miss Lou sweetly delivered the Jamaican language in song and poems on stages in the island and across the world, encouraging acceptance and wide usage, and removing a veil of shame carried by many ordinary Jamaicans who could not speak the Queen’s English.

Miss Lou wrote in Jamaican Patois, helping to have it recognised as a "nation language.”

Other writers and performers have followed in her footsteps, including artistes Mutabaruka, Linton Kwesi Johnson and Yasus Afari. Miss Lou is credited with giving Harry Belafonte the foundation for his 1956 hit "Day-O (The Banana Boat Song)".

Who was this woman, who single-handedly reversed and destroyed the labelling of Jamaican Creole as unfit for airplay?

Miss Lou was born on September 7, 1919, on North Street in Kingston, Jamaica, the only child of Augustus Cornelius Bennett, a baker from Spanish Town, and Kerene Robinson, a dressmaker.

Raised by her mother after the death of her father in 1926, she attended Ebenezer and Calabar elementary schools, before enrolling in St Simon's College and Excelsior College, in Kingston.

Louise Bennet’s first dialect poem was written when she was 14 years old and soon her prolific output would take her far beyond Jamaica’s shores.

In 1943, Bennett enrolled at Friends College in Highgate, St Mary where she studied Jamaican folklore, the same year in which her poetry was first published in The  Gleaner newspaper.

In 1945, Bennett became the first black student to study at London's Royal Academy of Dramatic Art (RADA) after winning a scholarship from the British Council.

On graduating from RADA, Bennett enlisted with repertory companies in Coventry, Huddersfield and Amersham, and also performed in revues across England.

On her return to Jamaica, Miss Lou secured work with the Jamaica Social Welfare Commission where she was employed from 1955 to 1959, and taught folklore and drama at the University of the West Indies.

Her performances in local theatre became legendary. Miss Lou became known as Jamaica’s leading comedienne, and used her poems in Jamaican patois, to raise Jamaican folk art and expression to a level adored by many.

She managed to express the thoughts of many in her verses.

In her poem, “Noh Lickle Twang,” a repatriated Jamaican is teased for his lack of appropriate styling:

Me glad fe se's you come back bwoy,
But lawd yuh let me dung,
Me shame o' yuh soh till all o'
Me proudness drop a grung.

Not even a drapes trouziz? or
A pass de rydim coat?
Bwoy not even a gole teet or
A gole chain roun yuh t'roat.

Suppose me las' rne pass go introjooce
Yuh to a stranga
As me lamented son wat lately
Come from 'Merica!

Noh back-ansa me bwoy, yuh talk
Too bad; shet up yuh mout,
Ah doan know how yuh an yuh puppa
Gwine to meck it out.

Between 1965 and 1982, Bennett introduced ‘Miss Lou's Views’, a radio monologue, and in 1970 started hosting ‘Ring Ding’, a children’s television programme.

‘Ring Ding’ aired until 1982 and was based on Louise Bennett’s conviction that “de pickney-dem learn de sinting dat belong to dem (their own language and heritage)". Boys and girls were invited to share their talents on-air.

In time, she also released many recordings of traditional Jamaican folk music and Children's Songs.

Miss Lou lectured extensively in the United States and in the United Kingdom on Jamaican folklore and music and represented the island all over the world.

Miss Lou was married to Eric Winston Coverley, a performer and promoter of Jamaican theatre, from May 30th, 1954 until his death in August of 2002.

Her contribution to Jamaican cultural life led to her many awards and much recognition.

In 1983, she earned an Honorary Degree of Doctor of Letters from the University of the West Indies and in 1998 she received the same from York University, Toronto, Canada.

She was also appointed Cultural Ambassador at Large by the Government of Jamaica.

On Jamaica’s Independence Day, 2001, Bennett-Coverley was made a Member of the Order of Merit for her distinguished contribution to the development of the Arts and Culture.

Miss Lou lived her last years in Scarborough, Ontario,  Canada. She died on July 27, 2006, at the Scarborough Grace Hospital after collapsing at her home. A memorial service was held in Toronto on August 3, 2006, after which her body was flown to Jamaica for a state funeral. She is interred in the country's National Heroes Park.

In 2011, photographs, audiovisual recordings, correspondence, awards and other material regarding Miss Lou were donated to the McMaster University Library. A selection of Bennett's personal papers is also available at the National Library of Jamaica.