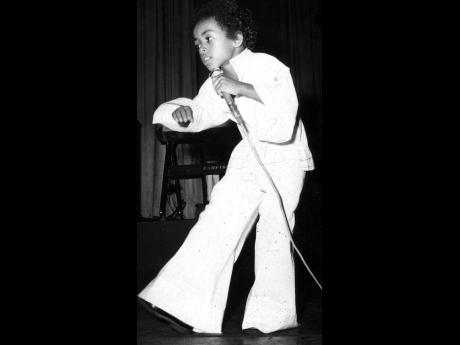 It is hard to believe that in 1973, Junior Tucker was already a star. But the child star, at five years old, was already making hits. In later years, Tucker, who was known as the Jamaican Michael Jackson, would become known for hits like 1990s ‘Don’t Test’, ‘Love of a Lifetime’ in 1993 and ‘True Confession’ in 1996. The Gleaner was there throughout the child prodigy’s long career, even at the start.

Although only five years old, Junior Tucker already has his own huge clique of fans with a great deal of faith in his ability to match other child superstars like Michael Jackson and Donny Osmond.

Junior has great admiration for Michael, but his manager, Mr Earle Sutton is determined that he will not become a local prototype of the popular American singing star.

The young star has only made six appearances so far, on Merritone's Amateur Talent Exposure at the Penthouse Club, the Stable and at the Sheraton Kingston Hotel, but his natural talent at such a tender age has endeared him to as many fans.

He may have inherited his talent from his uncle, Jimmy Tucker, once the singing star of the island, and a very popular stage artist in the days of the Vere John's Opportunity Hour.

He may even have gathered it from practising with his other former singing uncle, Desmond Tucker, or Sharon Tucker and Devon Tucker, his sister, and brother who are both singers.

His biggest appearance to date was his recent appearance at the Nuggets Grand Gala, when the five-year-old wonder brought the house down with a very original stage act, in which he broke off from his former regular stage songs, Michael's hit "BEN" and Jermaine's "DADDY'S HOME;" and did "BREAK UP ΤΟ MAKE UP" and Donny Osmond's "ROCKING ROBIN"

Actually, Sutton, a shrewd manager, is the man behind the young singer's meteoric rise. He makes all the decisions and treats Junior like his own child.

Sutton came across the boy wonder in Pembroke Hall when he was only three. "I was just walking down the road when I heard the singing. I thought it was a little girl, when I investigated, it was Junior."

Sutton realised early the tremendous potential for star material in Junior and set to the task at once.

He fed him with ideas, slowly, nurturing him for two years, before putting him on the Talent Exposure show. The young manager picks the shows on which his "child wonder" appears and tries to keep his act free from any similarity to any of the other world-famous stars of his age group.

"The audiences have been really great in their acceptance of Michael,” he added. However there was one sad thing about Junior, he had to add "Junior doesn't like Reggae."

Junior is from a family of nine brothers and sisters and attends the Pembroke Hall Kindergarten School.