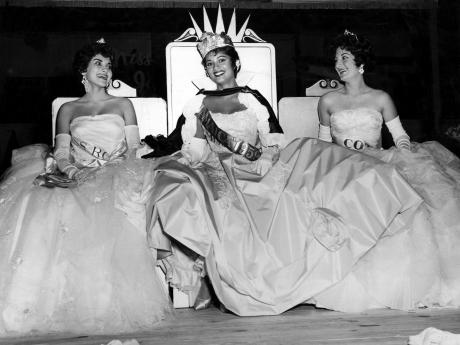 Born to a Chinese father and Jamaican mother, living in the then Kingston-Chinese community of Vineyard Town, Sheila Chong would finish runner up at the Miss World pageant in 1959. The marriage of her parents, like the marriage of the cultures, proved a beautiful unison that bares out the vision expressed in our motto, ‘Out of Many One People’. Here is where the late Sheila Chong’s journey began.

Two announced already been made. There was a hush. The announcer paused dramatically and the large crowd on the lawn of the Myrtle Bank Hotel waited expectantly. The third announcer tumultuous applause, a battery of photographers with flashbulbs, and amidst the “tumult and the shouting” a new Beauty Queen was born.

Regal In pale blue peau-de-sole, the bodice richly encrusted with mother-of-pearl sequins, the new queen, 24- year-old Sheila Chong detached herself from the line of beautiful girls, made her way to the front of the stage and took her place in between the two runners-up.

And so to the accompaniment of tremendous cheering the climax of the 1959 “Miss Jamaica” contest had been reached. The time was one hour after Saturday midnight. Second prize winner was Dawn Lazarus, “Miss Coty” sponsored by Levy Brothers Ltd., and third prize winner, Miss Jeannette Nasralla, “Miss Roux” sponsored by Distributors Ltd. The winner, sponsored by Desnoes and Geddes Ltd. wore the sash of “Miss Red Stripe Beer”.

Miss Chong, daughter of Mr William Chong of Kingston, and a graduate of Alpha Academy, Emanuel College In Boston and the Museum of Fine Arts School in Boston was a favourite with the crowd and the applause which greeted her second appearance on stage presaged the; audience’s ovation when the1 announcement was made.

While the judges made up their minds, Mr Austin Interviewed Mr Leon Cazin, President of the Latin Fiesta founded by him 33 years. Miss Joan Duperly, last year's queen was a guest at last year's fiesta. Mr Cazin arrived on the Island on Saturday afternoon to crown “Miss Jamaica 1959”.

Then, Mr Braham, in true dramatic style, made the final announcements, first the third prize, then the second and finally the winner - each greeted with applause from the audience. Each contestant as her name was called walked to the front of the platform - the base of the “T” - and took the chair provided for her.

Mr Cazin crowned the queen, put the “royal” cape on her shoulders and the blue sash of “Miss Jamaica - 1959”.

Mr Eddie Zacca, chairman of the “Miss Jamaica” (1959) Committee thanked the management of the various hotels, and dubs which had entertained the finalists during the contest, sponsors, donors, judges members of the committee which promoted the contest and finally the contestants themselves. Miss Chong was then presented with the Charm Trophy by Mr Braham who also thanked all the participants in the contest and with the Seprod Trophy by Mr Kevin Elliott.

One of the big moments was the presentation of the first prize - donated jointly by Martin’s Travel Service and BOAC, and presented by their representatives Mr Gene McDonald and Mr Walter Graham - a round trip to London, Paris and Borne. A surprise gift of £200 from her sponsors also brought a gasp of pleasure from Miss Chong.

Miss Lazarus list of prizes was headed by a return all-expense-paid trip to Miami donated by Commodity Service and included similar prizes to those won by Miss Chong, Miss Nasralla’s prizes were also similar items. Mrs Charlie Braham distributed all prizes to the winners and 12 contestants.

From her throne “Miss Jamaica 1959” said, “Everyone has said thanks so far. So what else can I say?  I can only say thanks to Desnoes and Geddes, my sponsors, who have been over-generous. I hope I will be a worthy representative of Jamaica and a worthy ambassador in London Paris and Rome”.

Very noticeable was the contestants’ predominant choice of white gowns and the ever-fashionable figure-flattering H-line. Of the 15 contestants, 11 wore white gowns, some of which were trimmed with, blue. Two blue, one pink and one blue with white were the other choices, and all in all the most gorgeous collection of gowns seen here this season.

Except for Miss Chong, all the contestants wore diamante accessories. Her choice was mother of pearl ear-muff earrings created by herself to compliment the mother of pearl sequins which encrusted her entire bodice and poured in diminishing patterns to half-war down the full, wide panelled skirt. The bodice was also appliqued with white lace, and on the back of the skirt, slightly below the waist on the right side was a huge bow. Across the skirt from right hip to left hem a white drape held at the hem a blue rose. Full-length white gloves and Ice-blue satin shoes completed the ensemble, created for Miss Chong by Joyce’s.

Miss Lazarus wore white organza - a Flossie Thomas creation Strapless and cut on the short H-line the bodice softly shirred, the main feature of the gown was accordion-pleated fan-shaped appliques with rhinestones, which started just below a soft draping below the hip and covered the entire lower half of the wide skirt. Full-length white gloves, white shoes and diamante accessories were her choices.

Miss Nasralla chose white tulle embroidered with blue flowers, over taffeta. A strapless H-line bodice very low in the back, and a pale blue satin drape caught at the hip and falling gracefully to the floor behind to form a train was the feature of this Flossie Thomas gown. White mules with diamante clips and long blue gloves added the final touch.