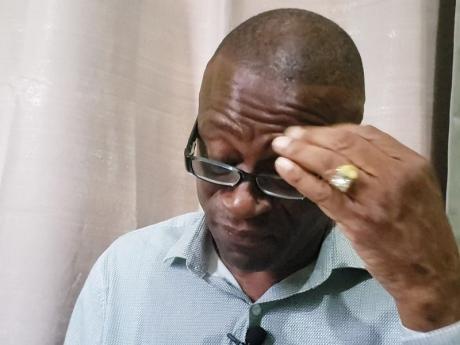 Last week George Wright, despite saying he still believes in the philosophies of the Jamaica Labour Party, resigned from the organisation. That statement in his resignation letter begs the question of while he should now be considered a member of the opposition, is he really?

Where does George Wright stand – or sit?

ONLY A resignation as an elected representative can remove George Wright from his new seat on the Opposition benches in George William Gordon House, despite how unwelcome his presence may be for members on that side.

The Westmoreland Central member of parliament, who has been embroiled in controversy after the surfacing of a video in which a man was seen beating a woman, surprised Opposition members when he sat on their benches last Tuesday on an early return to the Parliament, two weeks before his granted leave of absence expired.

Now, trade unionist Helene Davis-Whyte says that even if Wright was expelled from the Jamaica Labour Party (JLP) and had not resigned from the House, he would still be placed on the opposition benches.

“It is a creature of the Westminster system of government. But if ever there was need for constitutional changes, this situation recommends it. He is not under the whip of the governing party, and neither that of the Opposition. But if he is not one of the majority of members that form the Government, then he is opposition. Based on the news release of his resignation, he supports the [governing] party’s policies and programmes, so this is really a farce … ,” Davis-Whyte said last week.

“Look, the situation has tied everybody’s hands – police, Government and Opposition ... ,” she said while calling for constitutional changes to allow for the recall of representatives.

Former Prime Minister Bruce Golding championed calls for recall and impeachment legislation during his days as head of the National Democratic Movement (NDM). In 2011, he pushed to have a proposed statute tabled in Parliament that same year, but it fell off the table and was never reintroduced until People’s National Party (PNP) President Mark Golding reintroduced it recently.

While accepting the constitutional provision, Mark Golding said Wright should sit among those whose policies he supports.

“George Wright supports the governing party’s objectives and programmes. Therefore, he can be expected to vote with the majority and should sit with them also,” said Golding, a lawyer.

“I have no idea who or what George Wright is at this moment. He has not spoken about anything. He is not a part of the Government or Opposition caucuses. The seating arrangement is not a constitutional matter. It is a matter for discussion between the government and opposition business leaders in the House, and we have not had that discussion yet,” said Hylton last week.

“We have to discuss it for good order. If not, he may well sit in the front benches of the Opposition, which is reserved for senior members and spokespersons, and vote with the Government. It is not just for the constitutional provisions, but for good order. This is untenable and antagonistic in the least,” warned Hylton.

Discussions will take place among himself, the Clerk to the House, and Leader of Government Business Edmund Bartlett, said Hylton, given that “he cannot be seen as opposition”.

“Our view is that he is neither independent nor opposition,” stated Hylton.

Moving him would require the House Speaker “to break new grounds, and she has already shown a willingness to do so with her ruling on the interpretation of the divide vote”.

Environmentalist and Gleaner columnist Peter Espeut said the Opposition now has a spy for the Government on their benches and over whom they have no control.

“This is a very nice arrangement for the Government. He resigns [from the ruling JLP] and is now seated on the other side, which gives the impression that they have taken action. But, of course, they did not take any action. He said he resigned. There are no three sides in the House. So, if you are not on the Government side, you are on the Opposition. And if we had three parties forming the membership of the House, the majority forming the Government would be on one side and the rest on the opposition benches,” said Espeut in an interview.

Jamaicans have not elected anyone outside of the JLP and PNP to the Lower House since Independence, and Espeut said the situation was as technical as it was formal.

“What is the laughing stock of Parliament is that the JLP did not expel him but allowed him to claim he resigned. Really, he should sit at the back of the opposition side and not beside Mikael Phillips, definitely not within their benches,” Espeut suggested. “The JLP has chosen not to expel him or force his resignation as the elected representative. It’s evident to many that the JLP still has 49 members in the House.

“The problem on our hands is that the JLP did nothing to censure him, except to move him from its caucus. What is revealing, though, is that the women in the governing side in the House did not beat the benches in disgust to have him removed from among them. They chose to be JLP more than women,” stated Espeut.

Former House Speaker Delroy Chuck says there is no need to change the current arrangement.