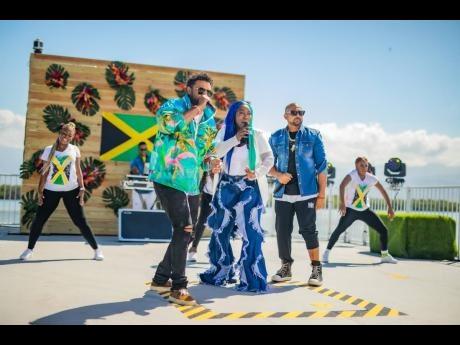 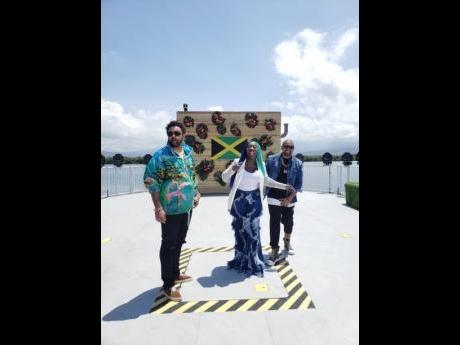 Contibuted
The performance for ‘Good Morning America’ was shot on a Sea Walk, a trademarked device which is an articulated mechanism used to transport passengers from ships to the shore at sensitive ports. Only three exist in the world. 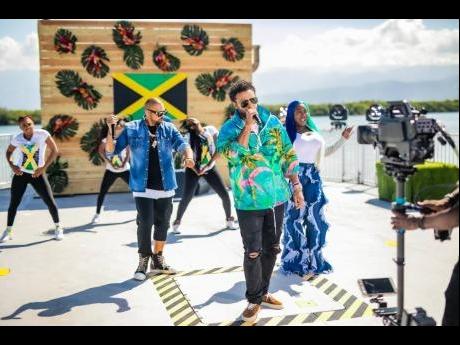 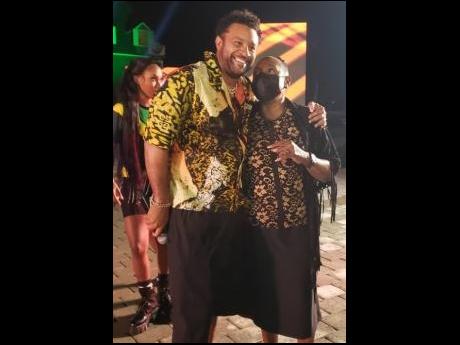 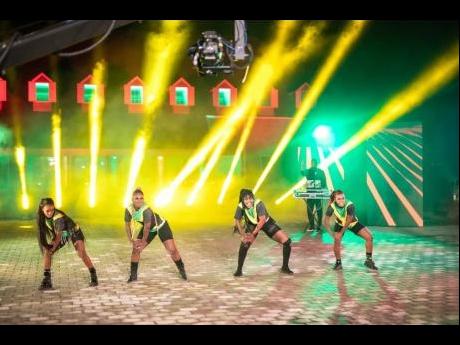 Contributed
The ‘Jimmy Kimmel Live!’ performance featured a light show, similar to the treatment of the music video, and as ‘Go Down Deh’ is a dance track, of course the dancers were included. 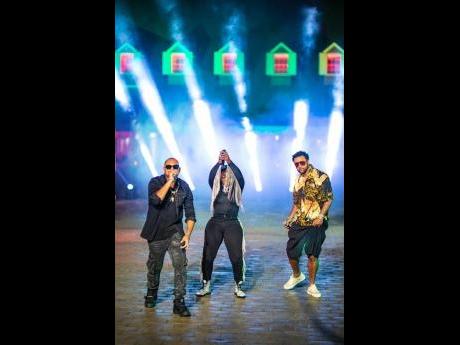 Contributed
From left: Sean Paul, Spice and Shaggy perform during the shoot for their appearance on 'Jimmy Kimmel Live!'.
1
2
3
4
5
6

When Beenie Man and Bounty Killer destroyed a VS stage to re-ignite the fire that is dancehall in the global space, many thought ‘we better run with this momentum because it doesn’t get any better’. Well, maybe it can. Maybe dancehall is grabbing its place in the virtual space as the problems of the Pandemic drag on interminably. Sean Paul, Shaggy, Spice, VP Records, and Phase 3 Productions say so.


VP Records, Phase Three tell how it was done

A PROJECT that came with a bar set so high that even the record holder would have had a challenge scaling is now boldly and proudly stamped ‘Mission Accomplished’ in black, green, and gold. To achieve this designation, powerhouse reggae and dancehall label VP Records and Phase Three Productions deftly pulled the aces out of their Jamaican back pockets – and this even included a piece of equipment owned by only three countries in the entire world, one of which is Jamaica.

It was really a no-brainer that Phase 3 Productions would somehow, somewhere, be part of a trio of events to showcase dancehall and Brand Jamaica on the global stage. And it would be a given that the multimedia company would dazzle on this project, featuring three titans in dancehall music – Spice, Sean Paul and Shaggy – performing their mega-hit, Go Down Deh, on Good Morning America, Jimmy Kimmel Live! and the Wendy Williams Show.

Phase 3 is the owner of many firsts. It was the first company in the Caribbean to have a live HD multi-camera system; the first to have a complete 4K live mobile production unit; and Phase 3 brought virtual graphics to the live production space, spearheading the largest live production in Jamaica’s history, a 28-camera production for the Concacaf Gold Cup in June 2019. CEO Delano Forbes, who runs the family business started by his late father, multimedia visionary Richard ‘Pardy’ Forbes, is known for embracing challenges. His most recent was producing high-quality performance content – with the emphasis on ‘high quality’ – for major US networks. He told The Sunday Gleaner that he approached this particular task in a special way.

“Creatively, we had to use one location to give different feels … looks, daytime look for Good Morning America and a night-time look for Jimmy Kimmel, while showcasing a bit of Jamaica,” Forbes explained.

“We decided to film Good Morning America on the Sea Walk. The Sea Walk is a trademarked device which is an articulated mechanism (similar to a jet bridge at an airport) which is used to transport passengers from ships to the shore at sensitive ports where conventional docking systems are not used due to the environmental sensitivity of the location. Only three exist in the world – Norway, Sweden, and Jamaica – a first, and a good look for Jamaica,” the CEO stated.

He added, “The high-impact performance featured a beautiful Kingston Harbour and the Blue Mountains as the backdrop. For Jimmy Kimmel, we decided to go with a light show, similar to the treatment of the music video and used the buildings around the Courtyard at the Cruise Port at the Historic Naval Dockyard to create the scene. It was also important to incorporate the dancers as it is a dance track. For the Wendy Williams Show, we recorded Sean Paul on green screen to allow greater creativity in editing.”

For Forbes, there were definitely stand-out moments between planning for the shoots and the actual execution, but most of all, he is just “very proud of the entirely Jamaican production team who made this all happen, on an international level”.

He noted that “working with our home-grown international stars – Shaggy, Spice, and Sean Paul – itself was a stand-out moment. It was a really good collaborative vibe on set in front of the camera and behind the scenes. The first day of the site visit when we toured the location, just out of curiosity, [we] decided to walk out on the floating sea walk, as filming on the pier was out of the question for a great number of logistical reasons. Once we all got out to the end of the pier, Michelle [Williams said], ‘Why can’t we film out here?’ Our heads started to spin. The team immediately knew we had to overcome these challenges.”

Williams is the Jamaica-based regional director in charge of the Caribbean and Latin America for VP Records, the world’s largest reggae and Caribbean record label, and a major contributor to the globalisation of reggae and dancehall culture. She told The Sunday Gleaner that the pressure was on from day one, and it was intense. “I’ve been the lead on many of my company’s productions, but this one was by far the most exuberating. The bar was set real high by the US TV shows, so the pressure was on! All the decisions regarding the actual shoot were left entirely up to me, from the location, movements of the dancers, look and feel of the set. I wanted everyone to know that this was Jamaica, no doubt about it! The flow of the day was just a day of nuff love and laughter. Everyone was happy and upbeat,” she said, her enthusiasm palpable.

“There were moments when we had to stop shooting because the Sea Walk was rocking due to the waves. Shooting on the Sea Walk was pretty challenging, but with determination, we got it done. I was so happy when I got the call on the set that the shows’ producers were happy with the videos I kept sending to get approval,” Williams shared.

She ecstatically hailed the team effort in showing Jamaica to the world on so many levels. “We could not have done it without the entire team. I’m so proud and grateful that VP Records got the opportunity to show the world what Jamaica has to offer in terms of talent, filming locations, and a first-class production team. Team Go Down Deh, job well done! We all worked hard to showcase Jamaica on this one,” Williams declared.

In concluding, she noted, “Hopefully, other talk shows will look at our beautiful island and this magnificent location so close to the airport [and] they will come to Jamaica to shoot TV shows live.”