France 1998, the World Cup with a reggae investment 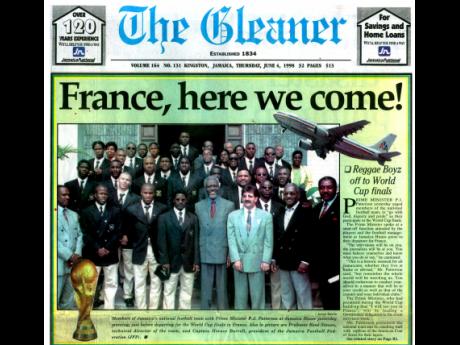 When the Reggae Boyz made it to the World Cup in 1998, so historic a day was it, that Prime Minister Percival James Patterson, declared a public holiday. The legality of the decision was questioned, but only for a moment, as the reality of what the nation had achieved sunk in. Later, when the team would depart on June 3, 1998, the moment really had sunk in and Patterson pointed out that Jamaica was not only representing itself but the region.

PRIME MINISTER P.J. Patterson on June 3, 1998, urged members of the national football team, to ’go with God, dignity and pride’ as they participate in the World Cup finals.

The Prime Minister spoke at a send-off function attended by the players and the football management at Jamaica House prior to their departure for France.

’The televisions will be on you, the journalists will be at you. You must behave yourselves and know what you do or say,’ he cautioned.

’This is a historic moment for all Jamaicans, whether they live at home or abroad,’ Mr. Patterson said, ’but remember the whole world will be watching us. You should endeavour to conduct yourselves in a manner that will be to your credit as well as that of the country and your individual clubs.’

The Prime Minister urged the players to give of their best in France, adding that once they had done that the nation would be satisfied with the outcome.

Mr Patterson, who has from the start backed the Jamaican team on their ’Road To France’ campaign, also told the footballers that he was instructed at the last CARICOM Heads of Government meeting to tell them that although they are representing Jamaica, they are also representing the entire Caribbean region.

Mr Patterson told the gathering that prior to the start of the World Cup campaign he met with Jamaica Football Federation president, Captain Horace Burrell, who said he had a dream that Jamaica could reach the World Cup finals and needed help.

’He said we will need the best coach from Brazil.’

Mr Patterson said he wrote to the Brazilian president, asking for a coach to assist Jamaican football.

supported the national football programme, the media which followed Jamaica’s progress on the road to France and the Government and people of Jamaica, who also gave their support.

The Prime Minister, who had promised during the World Cup build-up that ’I will see you in France’, will be leading a Government delegation to the event early next week.

Mr Patterson presented the national team and its coaching staff with replicas of the Jamaican Coat of Arms for their lapels.