Walcott stamps his class on the Aussies 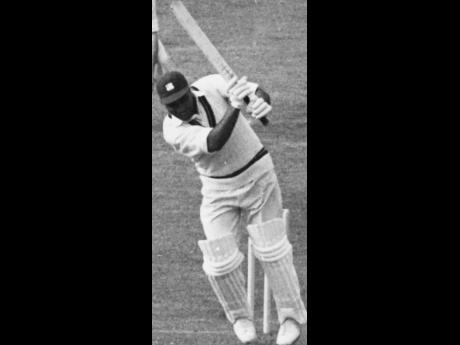 West Indies batsman Clyde Walcott, one of the famous three Ws, stamped his class on the world of cricket in no uncertain terms, putting himself forward as one of the greatest cricketers around at a time when West Indies cricket, certainly on the rise, hadn’t risen yet. Even as West Indies stared defeat in the face, Walcott became the first cricketer to score back to back centuries in a Test.

CRICKET HISTORY was made again yesterday at Sabina Park in the fabulous final Test between the West Indies and Australia. This time it was giant Barbadian batsman, Clyde Walcott, who did it, as he established two world’s records.

By scoring separate centuries in each innings of the match – 155 and 110 – he became the first batsman in the history of the game to achieve the distinction twice in the same series. His first was in the second Test at Queen’s Park Oval, Trinidad when he made 126 and 110.

The two century-in-a-Test-twice achievement was first made by Herbert Sutcliffe for England against Australia in 1924/25 in Australia and 1929 in versus South Africa and again by George Headley in 1929/30 and 1939 (only time at Lord’s) – on both occasions against England.

In a fighting innings yesterday Walcott in alliance with left-hander Garfield Sobers figured in a new fourth-wicket record of the West Indies as they added 179 runs in 181 minutes.

For Aussie wicketkeeper, Gil Langley, yesterday was also a distinguished occasion. He held another brilliant legside catch to dismiss Atkinson – his eighth in the match. It equals the world record of another Aussie, J. J. Kelly for Australia against England at Sydney in 1901/02, and Leslie Ames versus the West Indies at The Oval in 1933.

At the end of the day, Australia who have already won the series had virtually achieved Ina Johnson’s objective of three Test victories. With the last pair in, the West Indies needed 108 to save an innings defeat.