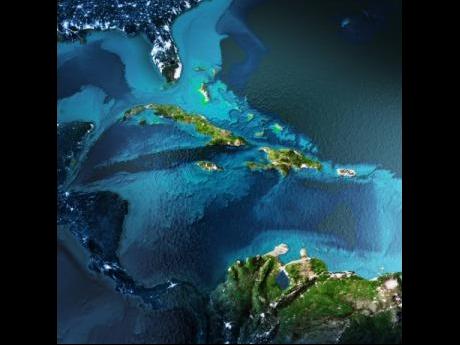 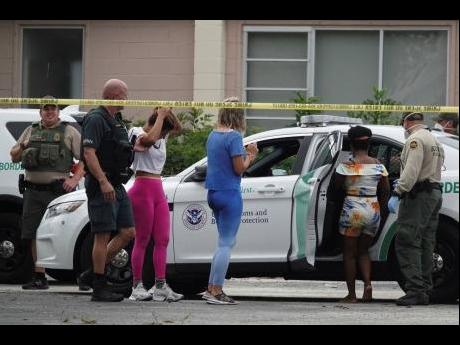 AP
US Border Patrol officials detain some of the multiple migrants who came ashore on the intracoastal waterway, Thursday, June 17, 2021, in Pompano Beach, Florida.
1
2

There has always been a healthy, or unhealthy stream of people out of Jamaica. But now police say a link between Jamaica and the Bahamas as a route to the United States is becoming ever-more popular. The side of Jamaica that would force somebody to risk being shot or otherwise killed, just to escape its shores is something many of us do not think of. Jamaica Land We Love, it seems, is not a quote that encompasses reality for all.

THE TRIP is not for the faint of heart. Smuggled migrants using The Bahamas to gain entry into Florida from Jamaica risk being robbed, shot, or eaten by sharks in a’ dog-eat-dog’, every-man-for-himself pursuit of the ‘American Dream’.

The lucky ones disappear into the Sunshine State and start new lives, while some get caught by US coast guards, as did the 14 Jamaicans collared upon entry into Pompano Beach, Florida, last week.

However, the stories of the unlucky ones, those pushed or ordered to jump overboard during pursuits by law enforcement, often never get told. Neither are those of others who drowned when their vessels crashed or overturned.

Winston Bradley*, a former Jamaican drug dealer, had to swim to shore twice in the six times he has entered the United States through The Bahamas illegally.

“One of the time, I had to swim to the beach from about half a mile or a little more than that; and when me reach in police drawdown on we same time. Is a lucky thing I crawl go into one bathroom around the back of a hotel,” recounted Bradley, who was also convicted multiple times for drug dealing, which he said was made easier by the Bahamian channel.

He said he and other illegal migrants were ordered off the vessel by the captain after the boat developed engine problems, stopped, and started drifting off course. This was about 3:00 a.m.

“The captain decided that he wasn’t going to jail and pop off a gun. I didn’t take any risks, me and me bredrin just swam off,” he said, noting that the boat had at least two dozen illegal immigrants at the time, most of whom were Haitians and Jamaicans.

“About 13 of us made it in. Most of them man there drowned at sea, and I know for sure that two Haitians got shot because they refused to jump off in the water. That was before we jumped.”

He continued, “The thing is, the boat captains rather you jump off and kill yourself than the coast guards come and catch you in his boat. They don’t want to go to prison with you. Plus, you are a stranger to them.”

Last week, Fitz Bailey, deputy commissioner of police in charge of the crime and security portfolio, said the Bahamian route is popular for criminals trying to flee Jamaica. It was not clear up to yesterday, whether any of those arrested in Pompano Beach last week were wanted by cops locally. It was also not clear whether any were repeat illegal migrants to the US.

“A lot of our criminals have been held in The Bahamas and repatriated to Jamaica; a lot of people,” Bailey said, explaining that immigration charges are often used to detain them before deportation.

Asked what measures the police have taken to clamp down on the escape path allegedly used by the likes of incarcerated dancehall artiste Andrew Davis, also called ‘Flippa Mafia’ who was arrested in Florida after trying to re-enter the US via boat from The Bahamas, as well as incarcerated St Catherine strongman Tesha Miller, Bailey offered only: “I wouldn’t give away strategy.”

Bailey also declined to say how many Jamaican wanted men are believed to have used this channel to flee from authorities.

According to Bradley, however, any policing strategy employed by local and international authorities must be airtight and highly collaborative in order to clamp down on the massive syndicate of individuals allegedly involved in the racket. Usually, he said, it is operated by a major player who contracts and splits spoils among boat captains as well as individuals in Bimini and in Florida, who put up and hide the illegal immigrants upon entry.

“You have a boss who collects the money and he is the one who picks the date and sends out the boats. Most time he has a couple of boats working with him,” he continued.

Reports by the United States Coast Guard earlier this year revealed that since October 1, 2020, crews interdicted 78 Bahamians, eight Jamaicans, 182 Haitians and 194 Dominican Republicans. Between October 1, 2020 and September 30, 2020, 194 Bahamians, four Jamaicans, 182 Haitians, and 194 Dominican Republicans were collared trying to enter the US.

In addition to those arrested last week, seven Jamaicans were arrested off the south coast of Florida in March this year when the vessel in which they were travelling was boarded by coast guards. They were among 14 illegal migrants on that boat.

According to Bradley, the process starts with a Jamaican passport and a ticket to The Bahamas where hopefuls find accommodation, usually at a hotel. It is quite costly, he warned, adding that entry into The Bahamas, hotel fees, and smuggling costs could run individuals as much as US$8,000 or more.

From there, illegal migrants take a plane or boat to one of two Bahamian locations; north Bimini is the preferred choice for some smuggling syndicates. Afterward, they either follow up with arrangements made from Jamaica or search for smuggling connections on the ground. Bimini is the closest island to Miami, Bradley said, from there you can see the Miami lights at night.

“When you meet your connection, they put you up in a house, or they let you go to a hotel if you can pay for a hotel. But you can be at the hotel for up to two weeks and they are not ready (for you) yet, and your money goes up in hotel fees,” he explained.

“So normally people would stay at the house, and when you go there you see another 50 persons there with you – people from Haiti, Jamaica, all over, who are trying to enter the US,” he continued, adding that here, illegal immigrants wait to be summoned after the smuggling syndicates and their US connections have deemed the waters clear. The journey to Florida takes roughly three to four hours, usually in speed boats and at night.

Once there, illegal immigrants are often put up by persons in Florida who are part of the racket or make connections in Florida on their own. The next morning they allegedly walk out of the homes, free to roam the state. “But it is a very risky thing. You either have some people looking out for you or it is going to be very difficult. People out there to rob and kill you,” Bradley warned.

Seven of the 14 persons apprehended by US authorities as they attempted to sneak into Florida late Thursday after a boat trip from The Bahamas have been identified as Jamaicans, local police officials have confirmed.

Deon Cooke, also known as ‘Boobie Skeng’, is the bespectacled man in handcuffs who told a Florida television station that he “really want to leave because no life is in Jamaica right now”, according to multiple police sources.

“Bare killing going on there, really want to leave. Want a better life,” the man, believed to be Cooke, said on video as he was being taken into custody.

But according to local law-enforcement sources, Boobie Skeng is a known enforcer who, in the past, wielded significant influence in the east Kingston community of Dunkirk and has at least two criminal convictions.

There are reports, too, that he was deported from the US.

“That guy is an ex-convict, gunman, top man from Dunkirk who has served more than one [prison] sentence in Jamaica,” one investigator told The Sunday Gleaner, indicating that the Police High Command is combing through records for additional information on Cooke.

The Jamaica Constabulary Force declined comment for this story.

However, one veteran investigator told The Sunday Gleaner that since Cooke’s deportation, he has lost the clout he once wielded in his old stamping ground.

Investigators theorised, too, that by invoking Jamaica’s murder rate, Cooke was seeking to bolster his chances of obtaining asylum in the US.

Between January 1 and last Friday, Jamaica recorded 653 murders, 21 – or three per cent – more than for the comparative period last year, police statistics show.

“When he came back [to Jamaica], the thing (power he wielded) gone leff him so he is trying to get back inside the US. So, the argument weh him a put up ‘bout the killing, a asylum him a try fi get. But him can’t get asylum so. A prison him a go,” the investigator stated.