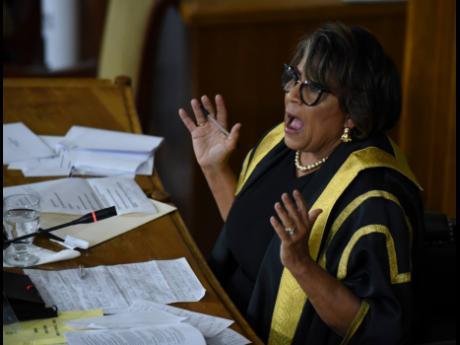 Marisa Dalrymple-Philibert has caught the ire of The Gleaner's newsroom once again. That newsroom, championing the pluses of a healthy democracy, has challenged the Speaker of the House's motives for some of her pronouncements and, indeed, some of her decisions. On this occasion, the seating of George Wright in the space of an Opposition front-bencher may need to be revisited. So says The Gleaner anyway.

THE GREAT virtue of democracies is not only that they give expression to the will of the majority, but, also, that they protect the rights and interests of the minority. This is a principle of which we did not expect to have to again remind Marisa Dalrymple-Philibert, the Speaker of Jamaica's Parliament. Or, not this soon.

But Mrs Dalrymple-Philibert continues to exhibit an absence of nuanced thinking and ham-fistedness in her engagement of the Opposition in the House, suggesting a failure to transcend the partisan commitments on which she entered the legislature and, therefore, as misapprehension of the job of the Speaker. Which is not to protect the interest of, nor to make life easy for, the Government. It is about logical and even-handed arbitration of the proceedings of the House.

The latest example of the Speaker's shortcomings is her approach to where George Wright sits in the House, and the concerns of the Opposition thereto. Mr Wright is the member of parliament (MP) who lately resigned from the governing Jamaica Labour Party (JLP), but who before that had ostensibly had the whip removed from him by the party. So, while remaining a member of the JLP, Mr Wright would no longer be a member of the party's parliamentary caucus. He is supposedly an independent member of the House.

It did not come to this because of George Wright having policy differences with his party. In fact, at his resignation he declared his continued support for the JLP's, and the Government's, policies and programmes. Rather, it has been widely alleged that Mr Wight is the man seen in a viral video battering a woman with a stool, which, months later, he has not denied. In the ensuing controversy, and embarrassment to the Government, Mr Wright, at the suggestion of the JLP, obtained leave of absence from the House, from which he returned early 10 days ago.

It was not, in the circumstances, surprising that the Opposition was chagrined that Mr Wright – who remains under a cloud of moral outrage – sat, or was made to sit, on his return to the House, among their numbers. Without distinction between the groups. And on the Opposition front bench at that.

CAME TO A HEAD

This matter came to a head-on Tuesday, although Mr Wright was not in Parliament. Morais Guy, the shadow health minister, occupied the seat Mr Wright used a week earlier. He circumvented attempts by Speaker Dalrymple-Philibert to have him follow parliamentary procedure and request permission to speak from a seat other than his own. The Opposition reported that they had filed paperwork for the change of Dr Guy's seat.

In the ensuing verbal melee, the Speaker argued that prior to Mr Wright using it, the seat was vacant, so Dr Guy could not now just occupy it. In any event, she insisted, as a minority member, George Wright's place was on the opposition benches.

Claiming the matter to be contentious only in the mind of Opposition leader Mark Golding, Mrs Dalrymple-Philibert said: “Throughout the Commonwealth, if you are not a member of government then you sit on the other side. It is a matter for discussion because we have ... here, in this Parliament, just has one Opposition, therefore, the Opposition sits there (on the left hand of the Speaker).”

Except that there are nuances. In the United Kingdom House of Commons, which has more members than seating space, there are no assigned seats but for the frontbenchers (ministers and shadows). Other members have only 'assigned' for a sitting; those they capture before prayers at the start of proceedings.

In Canada's federal parliament, the House of Commons of Canada, similar to Jamaica, members have assigned seats, with government MPs on the right-hand side of the Speaker and opposition members on his left. But as that parliament's publication on its practices and procedures explains: “Those members who do not have a party designation or who represent a party not recognised by the House are seated subject to the discretion of the Speaker in the remaining seats. These members typically occupy the desks to the left of the Speaker along the back rows, often but not necessarily near the end of the chamber. The Speaker allocates the seats for these members in part based on their seniority as elected members, while at the same time retaining a degree of latitude in determining these arrangements.”

If a member leaves or is expelled from his or her party, the Speaker assigns that member a new seat, but not typically on the front bench of the opposing party, or in a space that gives the impression of the member being part of that group.

Further, should Speaker Dalrymple-Philibert view the seating plan for Australia's U-shaped parliamentary chamber, she might note that independents and members of minority parties are seated at the far end of the chamber, to the left of the official opposition, with an obvious demarcation between the groups.

Moreover, this is not the first instance of arrangements having to be made for independent members of the legislature on either the government or opposition side of the aisle. For instance, between 1997 and 2002, when the then prime minister, P.J. Patterson, appointed Douglas Orane and Trevor Monroe as independent members of the Senate, both were assigned seats on the government side of the legislature, but with space between them and those senators who were subject to the Government's whip.

In other words, it does not need a reinvention of the wheel or rocket science to do the right or sensible thing in this matter. As it should not have been with the Speaker's bizarre reversal of herself, with a ruling that divisions of the House, in seeming contravention of the clear language of the Standing Orders, will no longer be automatic if called for by members. The potential saving grace on the seating debacle, however, is Speaker Dalrymple-Philibert's indication of her willingness to discuss the matter.