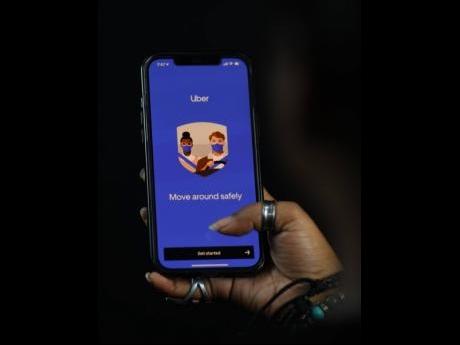 Ricardo Makyn/Chief Photo Editor
A cell phone user navigates the popular ride-share app Uber to seek a ride in Kingston, Jamaica. The company announced on Tuesday that it was operational on the island.

Uber’s entrance into the marketplace has caused great consternation among stakeholders in the taxi undustry. But is this a case of a sort of monopoly crying foul after the proposition of competition?

RIDE-SHARING ENTITY Uber announced on Tuesday that it is now operational in Jamaica, sending off alarms among the thousands of taxi operators destined to collide with the Silicon Valley behemoth that has sparked conflict in transportation centres globally.

Uber’s bid to muscle in on the local market coincides with planned forays by at least one other company, Tekkwi, a ridership app that is scheduled to roll out in the north coast hubs such as Montego Bay, Negril, and Ocho Rios.

In a statement issued on Tuesday, Uber said that its app is available in Jamaica through a “vehicle with driver” lease agreement.

“This model is legally permissible in Jamaica, considering the applicable regulatory framework, and has been successfully employed in other countries in the region, such as Honduras and Colombia,” the statement read.

It is unclear whether Uber’s strategy is to piggyback on the 19,000 existing taxi licences, with 14,800 categorised as route cabs and approximately 4,300 being hackney carriages.

Globally, Uber taps private motor vehicle owners, who have challenged the market share of taxi operators, leading to court disputes and a battle for hearts and minds over haemorrhaged jobs.

The Transport Authority told The Gleaner on Tuesday that it had not been approached by Uber for any approvals, but disclosed that it has asked the ride-share company to explain its operational structure.

President of the Jamaican Bar Association, Emile Leiba, said that public transportation sector in Jamaica is regulated by statute, suggesting that there was no clear path for private vehicles to operate for hire, legally, without the requisite permits from the Transport Authority.

“As far as I am aware, in order to legally operate in Jamaica, you do have to be registered as a PPV [public passenger vehicle], otherwise you are a ‘robot’, like any other,” said Leiba, referencing the vernacular for unlicensed cabbies.

“Even if Uber becomes registered as a taxi company, certainly its drivers would need to be registered as PPV vehicles and not private vehicles.”

The entry of Uber could cause tremors beyond legal implications, as taxi drivers represent a critical swathe of society’s grassroots and are often a noisy bunch that can spark explosive protests.

Though there are 19,000 taxi licences on roll, there are thousands more of unregistered drivers who live beyond the fringes of the official cohort and whose livelihoods sop up much unskilled labour.

CEO of 876 Technology Solutions, Trevor Forrest, said that Uber is bound to bring “disruptive and competitive” energy to the market.

Service confidence in public transport is generally low, a condition that might spur interest in Uber, which might seek to impose global standards on carriers in the local sector.

Forrest believes that Uber may cause standard taxicab drivers to lift their standards.

“You are able to let people know where you are and what car you’re in. It lends itself to new dispensation for travellers, especially for females. Safety is so important, so much so that they

may even look to pay extra for their added peace of mind,” Forrest said.

On the flip side, he said, its services may displace potential drivers and customers as it requires a smartphone and online payment.

“If you are not tech savvy, it may not immediately work for you,”Forrest added.

Head of the School of Computing at the University of Technology, Professor Sean Thorpe, also said that Uber represents a“good disruptor”for the transportation sector.

“It is also a cultural shift for our space, in that more taxi drivers who want to be a part of that type of system will need to recognise that they need to adapt and learn the technology. It is clear that it is going to decentralise the market from the perspective of what would have been the traditional taxi service,” he said.

That could be the death-knell for taxi companies that currently have leverage over independent contractors.

But Thorpe cautioned that there were questions on whether Jamaica has installed the necessary security architecture to make Uber and other rideshare options successful.

“The identity of the drivers needs to be thoroughly checked out as a part of providing the service to the general public,” he told The Gleaner.

“It means that the back-end system that integrates the Uber technology platform – knowing who the driver is and being able to authenticate who the driver is – all of that needs to be in place locally as a part of its execution.”

CEO of Aryvve, Ray Lee, has 80 drivers registered on his local ridesharing company, which operates on the north coast. He plans to expand into Kingston at the end of June.

Its drivers are certified by the Tourism Product Development Company or the Jamaica Tourist Board, or have hackney carriage licences and are vetted through police records.

“We have all their information in the application, so at no point will any passenger be in a vehicle with a driver whose licence or insurance has expired. The app keeps track of that and once it expires, they are booted off the app,” he said, adding that updated documents must be uploaded for the driver to be re-engaged.

A search for Uber registration at the Companies Office of Jamaica came up negative, but a representative with whom The Gleaner spoke noted that it is possible that the company could be operating under another name.

Uber, based in the affluent city of San Francisco, USA, offers its services to over “10,000 cities” globally. It operates with 22,800 full-time employees.