Winnie as big a hit as Nelson 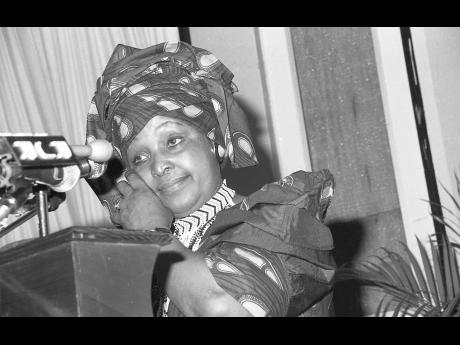 File
MOVED TO TEARS – “I am moved to tears…”, Mrs Mandela said, touched by the power of the love generated through the men and women who had come out to welcome her. Mrs Mandela’s voice broke at the podium as she addressed the gathering at the luncheon held at the Pegasus Hotel on July 24, 1991. 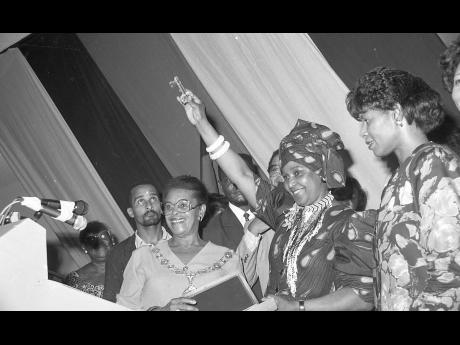 File
Winnie Mandela (centre) with the Keys to the City of Kingston, which was presented to her by Mayor of Kingston & St. Andrew, Councillor Marie Atkins (left), while Minister of Labour Portia Simpson looks on 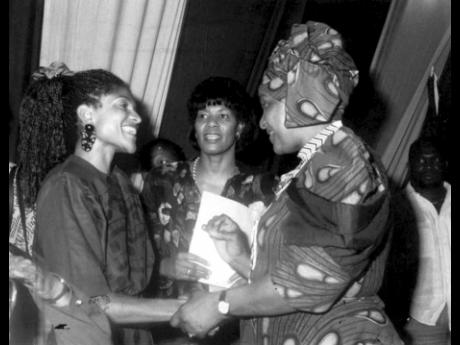 File
Singer Carlene Davis (left) one of the most powerful local singers in the fight for liberty for South African blacks was singled out for a special meeting with Mrs Winnie Mandela (right) on her recent visit to Jamaica with her husband Nelson. Carlene’s two songs “Welcome Home” and “Winnie Mandela” were like anthems during the visit of the Mandelas. At centre is the Hon. Portia Simpson, Minister of Labour and Sports.
1
2
3

The beauty of Winnie Mandela, ex-wife to Nelson Mandela, is legendary. Many in Jamaica had heard tell of that beauty and even had glimpses of it on television. But when she visited Jamaica in 1991, the reality of who she was and what she represented to a nation still very much matriarchal in its familial structure, shone through in no uncertain manner.

Live and in Living Colour

APPEARING many times more beautiful than most people had imagined her to be, Winnie Mandela in the flesh lived up to everybody's expectation, and then some. From the moment she stepped off the plane and onto the tarmac at the Norman Manley International Airport she had the masses who had gathered to welcome her and her famous husband, Nelson Mandela, exclaiming about her breathtaking beauty, her confident gait and her fashion savvy.

A proud picture of loveliness and baby-faced innocence, nothing in her unlined face and her regal carriage hinted at the years of anguish and the suffering that has characterized much of her adult life. Her two-piece maroon and gold cotton ensemble with block taffeta insets in the sleeves was topped by an elaborate headgear of the same fabric from under which huge earrings peeped. Complementing the dress was the most fabulous, beaded neckpiece that many Jamaicans had ever seen. Winnie Mandela had come.

The usual half-hour drive from the airport to the university took a good many more minutes as the "masses" thronged the highways and byways to catch a glimpse of the famous couple en route to their first official stop.

On campus, it was near total disorder, or better yet. what University of the West Indies Chancellor Mr Shridath Ramphal so eloquently described as *a creative chaos of love," as the people would not be restrained or prevented from participating in this glorious moment in history.

One bystander was heard to remark, as he strained to get a glimpse of the man and woman of the moment who were by this time Inside the Assembly Hall: "Nuff respect to Nelson still, but a Sister Winnie me wan' see!" He was not alone.

After the ceremony at the University where Mr Mandela had an honorary doctorate of Laws conferred (Incidentally he has about 17 of these so there is really no need to start calling him Dr Mandela now), they were on the move again.

While her husband lunched at Vale Royal, Winnie was whisked away by Minister of Labour Portia Simpson and a contingent from the Bureau of Women's Affairs for a special luncheon arranged in Mrs Mandela's honour at the Pegasus Hotel. This stop was, for many, the high point of the Mandelas' whirlwind visit.

Men and women poured into the limited space of the hotel's Negril Suite eager to get a close-up view, a handshake and, the more ambitious, a hug or a kiss. The atmosphere was charged with emotions which heightened as each of the various speakers expressed aloud what the people were feeling in their hearts, Winnie Mandela felt the vibes too.

After Lorna Goodison held the audience spellbound with her reading of the now-famous "Bedspread" poem, tears flowed freely all around. Although the poem is included in Goodison's published works, it is and will always be a very private poem, said Beverley Manley as she asked the gathering to remain quiet and allow the poet to read "Bedspread" to Winnie. Even the most cynical of onlookers who had just gone "out of curiosity," later confessed that they were touched in a way that would not easily be forgotten.

Minister Simpson expressed joy that women of all political persuasion were in attendance to participate in such a special occasion and told Mrs Mandela that this was affirmation of our solidarity with her and all the other disenfranchised women of South Africa.

Then came the moment most people had been waiting for. Still misty-eyed and overcome by what she recognised as a generous outpouring of love from the Jamaican people, Winnie Mandela rose and made her way to the podium to address the gathering. The cameras clicked, the crowd surged forward, but with a measure of restraint, then quieted down to a hush as the voice of Winnie Mandela rose in response to the tribute.

For a woman who, by her own admission, comes from a country that knows only hatred, she spoke only words of love, joy and hope:

"I am moved to tears by the wonderful and warm welcome...," she began but was unable to continue for a while as the tears surfaced and her voice broke. She regained her composure and continued:

"I come from a country where women have never known anything about human rights…. " she continued. "You must have wondered how I pulled through all those years, she said to loud "yeahs", articulating a question that has been on everybody's lips since we became aware of the suffering to which she has been subjected.

"But," she said, (I can assure you) those 27 years, amongst you here, there are women who kept my spirit going…"

She made reference to the letters of solidarity she had received while in and out of the prisons and through the years of banishments. “I am speechless today”, she said. But her few words held power and satisfied the anticipating audience that had been yearning to see and hear Winnie Mandela for such a long time.

"The power you exude as you are sitting here has definitely brushed on me," she said, promising her audience that she will go back to the South African sisters "with the full knowledge that we are running the last mile to our liberation (applause)".

At the Oceana Hotel, Downtown Kingston, the atmosphere was the same - the euphoria, the emotions running high, and the large mass of people gathered to welcome Winnie Mandela.

Carlene Davis set the entire crowd rocking and had them all singing along as she belted out her "Winnie Mandela" hit song.

Afterwards, chairperson Barbara Gloudon tried in her best vernacular to maintain order. Flo O'Connor of the Jamaica Council for Human Rights addressed the crowd: "We fully recognise that your struggle is our struggle..." she said to loud applause, ending with an exhortation for the audience to join hands in singing "We shall Overcome."

Then Bridget Lewis, a member of the University Singers performed the ANC anthem Nkosi Sikelel and at the end got a tremendous round of applause and a hug from the guest of honour.

Mrs Gloudon described the affair as a "groundation of the soul" and Mrs Mandela said she felt as if she was in Soweto, as she got up to take the podium again.

As she spoke, her powerful voice rising, she adopted the revolutionary stance for which she has become well known. It was not difficult at that point to understand why a woman with such vitality, such high energy and so much force could not remain silent in the face of oppression, could not be enslaved by the system of Apartheid.

Councillor Marie Atkins, Mayor of Kingston was visibly overjoyed and beamed with pride as she presented Mrs Mandela with the keys to the city of Kingston.

When it all ended, many did not get to touch her; but they came away from the Oceana satisfied that they had been a part of history in the making, and happy in the knowledge that the rantings of a misguided few who had earlier sought to make nonsense of the notion of honouring black royalty at the highest order, had been silenced.