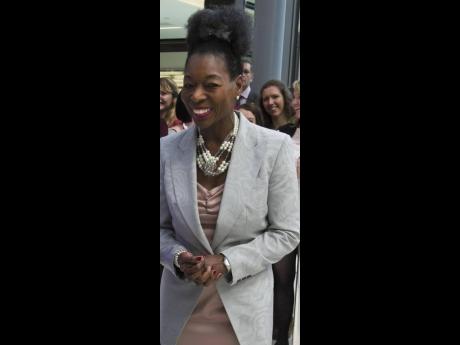 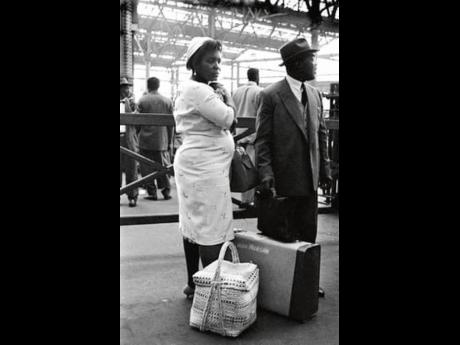 Contributed
A Caribbean couple on arrival at a UK train station in the 1950s.
1
2

Jamaicans were a massive part of Britain’s rebuild after World War II and the generation that did that, the Windrush generation, is being memorialised inside Waterloo Station in central London. It is interesting that three of the designs which have been shortlisted to be used as the monument.

THE CARIBBEAN community in the United Kingdom is being urged to cast their vote on a new national Windrush monument that will be erected inside Waterloo Station in central London, as the four shortlisted designs were revealed two weeks ago.

The monument will be a permanent tribute to a generation of arrivals from the Caribbean to Britain on the MV Empire Windrush in 1948, and in the decades that followed. It is expected to be unveiled on Windrush Day, June 22, 2022.

The shortlist of designs by four Caribbean artists include renowned sculptor Basil Watson from Jamaica; Jeannette Ehlers, who is of Danish and Trinidadian descent; Thomas J. Price, a British-born artist with Jamaican heritage; and Valda Jackson, who was born in Jamaica but studied fine arts in Bristol where she resides.

Each of the artists created a video, not only to unveil their design for the monument, but also to explain the concept of the design.

In his video presentation, Watson pointed to two visual elements which will be central to his design.

He said: “It will be a figurative sculpture as I will be using the man, woman and child representing the family as they aspire and climb, while the second element will be the suitcases which they climb on representing their culture as it holds everything they will be carrying from their place of origin.”

Watson sees this as a very important challenge, as Jamaica has so many strong connections with the Windrush Generation. He said: “What I am hoping for from the British Caribbean community is recognition of their grandparent’s history and experiences of arriving in the UK and taking on the challenges with bravery and ambitions. The monument will be a symbol for them to carry the story forward as, while it’s the beginning, it will continue the successes in their lives.”

Price has gone for a single bronze statue of a black woman for his design.

He said: “I would have loved to have a whole station full of Windrush people but I have chosen to go with a single figure of a woman standing in reasonable casual pose. I want to connect this fictional character, about 12 feet tall, looking intrinsically confident and powerful. She is very much connected to us as we walk around her. We can see from a distance and recognise ourselves in her.

“Erecting the monument is going to be a moment where the nation will finally be able to comprehend and appreciate what happened in 1948 and the years afterwards. They will be able to appreciate the contribution that was made by those pioneers who came over on Windrush and feel themselves connected, no matter where they are from.”

In her presentation, Jackson is proposing three figures on a platform, two adults and one child, which will symbolise the diverse groups of ethnicities and different cultures that travelled to the UK over a period of time.

She said: “In the space around each figure, I introduce elements of ambiguity. There are no certainties. We must acknowledge the trauma of separation and desertions which migration implies, alongside the excitement and joy of venturing into a new area of life. The child sitting on the platform is very significant to the design as it turns to face the people walking by; and the space next to the child is empty, which is an invitation for you the onlooker to maybe pause and to sit in that space.”

Ehlers opted to use Caribbean culture in her design and the three figures in her sculptor will be on stilts depicted from the Moko Jumbie African spirit character that came from Africa and walked all over the Atlantic Ocean to look after the enslaved in the Caribbean.

She said: “I have been working with the ocean before because, of course, it plays a central role for this whole narrative of colonialism and enslavement, which plays a very central role in the history of the Windrush Generation.

“I applied for the commission because I feel it is so important to make visible Caribbean and black culture in public spaces. I also think it’s really important to celebrate and honour the tremendous contributions the Windrush Generation has done for our modern culture.”

Baroness Floella Benjamin DBE, chair of t he Windrush Commemoration Committee, is excited that members of the public, and especially young people, will have their say in helping to select the design of the monument.

She said: “It is so exciting to finally see the designs our talented shortlisted artists have put forward for the National Windrush Monument in London Waterloo Station. I encourage everyone to take part in the survey and share their views ahead of the final design being revealed later this year.

“The monument will educate and inspire the next generation through the Windrush story. For that reason, it is incredibly important to myself, and the Windrush Commemoration Committee, to hear from young people on what they think of the four designs.

“The monument will be a place that people can visit from far and wide with their children and families, to learn and reflect on the lasting legacy of our Windrush Generation.”

The views of the public, particularly those from the British Caribbean community, will be taken into consideration by the Windrush Commemoration Committee as they make their final selection. The survey will run from July to August and can be viewed at: https://consult.communities.gov.uk/race-projects/windrush-monument-survey/