Blue Mountain, as beautiful as it is dangerous 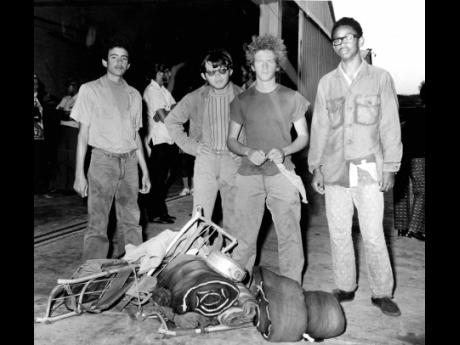 File
Anthony Stanley, Barry Hobbs, David Weise and Gordon Edwards, the four young hikers who were rescued on July 26 by a combined military, police and civilian operation after being lost in the Blue Mountains for nearly 16 days.

Hiking to the Blue Mountains is almost a right of passage for the young today, but lest it be forgotten how dangerous it is when plans aren’t followed meticulously for the journey, take a look back at the survival story of four boys left to fend for themselves in that environment for two weeks.

Looking tired but happy, four schoolboys who were lost during a hike in the Blue Mountains, landed from a J.D.F. helicopter at Up Park Camp, on the afternoon of July 26, 1972, nearly 16 days after the hike had started.

The boys — David Weise, 17, leader of the expedition, Barry Hobbs, 17, Anthony Stanley, 15, all students of Decarteret College, Mandeville, where they reside, and Gordon Edwards, 15, student of Jamaica College, seemed worn after their marathon ordeal but were smiling. They hugged their relatives and chatted with newsmen on the scene.

They had set out for a one-week hike which started at St. Margaret's Bay, Portland on Tuesday, July 11, stopping off at Industry, where they slept at the community centre on the following day, then on to Durham and into the lost terrains of Mountains.

"We were frightened," David Weise said. “On the sixth day of our hike, when after climbing down from some high cliffs we realized that we had missed the course of the Rio Grande which we had intended to follow on our journey.”

"There were just these high cliffs and the waterfall," Barry Hobbs said, speaking of the fall at the mouth of the Rio Grande tributary on which they were lost.

"We spread our blankets out, as they were red," Gordon Edwards said, “so that we could be spotted. On Sunday we saw two planes fly over. One had red on the side. and the other had blue, we waved and shouted but the plane did not spot us.”

The boys said their provisions were running out, as they had only provided for a week’s journey, but seeing the aircraft hovering overhead they felt that they would be rescued.

They were spotted on Monday, by aircraft of the Air Wing of the Jamaica Defence Force and the Jamaica Constabulary Force along with a ground force of some sixty soldiers who combed the mountains for the lost boys.

Supplies of food and water and a two-way radio were dropped to the hikers, but it was impossible for the aircraft to land in the rugged terrain.

According to a member of the Air Wing Lt. E. B. Whyte, who piloted one of the helicopters involved in the rescue, the boys were stuck at a point known as Pig's Head, a few hundred yards from Lysson's Post, where the tributary met the Rio Grande.

They were asked to come down to the post, where they would be met by one of the military’s search parties which was travelling from Durham towards the Blue Mountain Peak. Weise went but at Lysson's Point he turned in the wrong direction and started wandering away from the soldiers. He was turned back by Lt. Whyte who beckoned to him from the helicopter.

Weise, the most experienced hiker on the expedition volunteered to go alone for the soldiers and bring them back to where the other boys were, as they had found that the packs containing the supplies were too heavy for them to carry over the cliffs of the waterfall.

Realizing that the pace of the rescue operations was very slow the military decided to send two civilians, Mr. Lindsay Cespedes and Mr. Kenneth Anderson, residents of a nearby district, Dumphries to the spot where the boys were.

The civilians were able to travel by a shorter route and reached the spot in a short time. They then helped the boys with their packs and brought them quickly to where the soldiers were.

Edwards remembered one of the civilians, Mr. Cespedes who, had spoken to them earlier on the journey at Durham. "He went and picked coconuts for us", Anthony told a reporter, then burst into tears.

The boys along with a rescue group of four soldiers, Sergeant R. S. Davis, Corporal T. Burton. Lance Corporal K. Douglas and Private D. Bartley and the two civilians then journeyed to a spot a few miles up the Rio Grande where they were lifted out by a JDF helicopter piloted by Lt. D. O. B. Wright and taken to the Ken Jones airstrip, Portland, from where they were taken by plane to Up Park Camp on July 26.

Major W. Sternhead of the Air Wing was in charge of the operations, assisted by Capt. Dudley Beek. The boys were rushed home by their parents.

As a warning to expected hikers, David Weise told a reporter: “Expect anything. I never knew that the terrain was quite so bad. And another thing. Be well prepared, I wasn't. I only took food for one week and we spent over two weeks,” he concluded.