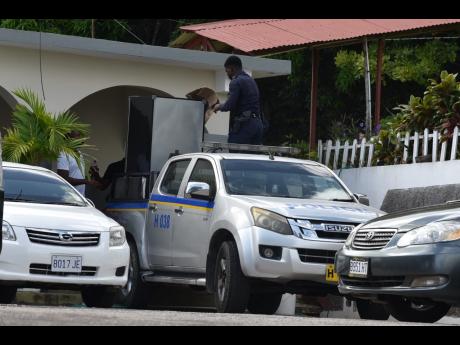 File
Policemen remove furniture from the Teamwork Retreat Centre in St James on Friday, reportedly en route to the nearby Freeport Police Station for storage. Dozens of policemen assigned to the zone of special operations in the parish were scrambling to find accommodation after they were told to vacate the premises.

Homeless police since last week are yet to receive some relief even as the Jamaica Constabulary Force hierarchy suggests those officers are to be blamed for their predicament because adequate notice was given to them, as well as the monthly stipend to help with the transition. But there are those who suggest the JCF isn’t being completely honest about its actions, even as they seek to help some officers out of their sticky position.

THE AREA One Police High Command says facilities at the Freeport Police Station are being retrofitted to house law enforcers who have been asked to vacate the government facility at Teamwork Retreat Centre in St James but are yet to find suitable accommodation.

“I am in consultation with the Police Federation and the commanders in charge of Trelawny and St James,” Assistant Commissioner of Police Clifford Chambers told The Gleaner on Monday.

“The federation has indicated that they are willing to help with repairs and to put some short-term measures in place at Freeport for persons who have not yet found accommodation.”

Others will be accommodated at the Trelawny divisional headquarters in Falmouth, while more help is to come from other support arms of the Jamaica Constabulary Force (JCF) by weekend.

This follows an exposé by The Sunday Gleaner that the affected officers were forced to lodge with even female acquaintances they met during police operations in some of the most volatile communities in the country after they failed to find suitable accommodation by the given deadline last Friday.

However, the Office of the Police Commissioner refuted the report in a press release yesterday, describing the report as untrue and misleading.

“Given that these members were part of a special deployment in the division, special accommodation was provided by JCF at considerable cost,” read a press statement issued by the JCF Sunday night. “However, this arrangement was never meant to be permanent .”

According to the JCF, all the men affected are being paid monthly housing allowance, which is reportedly $32,000 for constables.

The release also states that plans to wind down operations at the facility by July 26 were communicated to the police in May. The zone of special operations cops were also offered the chance to choose whether to remain in St James or to a division where they could find suitable accommodation, the police said.

“The majority of members elected to leave the division and were facilitated by the JCF in being transferred,” the statement said.

However, one seasoned crime fighter who served as a district constable for almost 10 years before becoming a ‘regular’ told The Gleaner that his request to be sent back to his home parish or the neighbouring division was denied.

“I am disappointed because I assured my family that I would be coming home in two weeks and it is now almost three years,” he told The Gleaner on Monday.

“We know what we swore to, but as district constables, we would have established homes and have our families, so although I am getting more than when I was a DC, my expense has exceeded my salary.”

The constable says that they were called to a meeting on July 13 and advised that they need to vacate the property in 10 days.