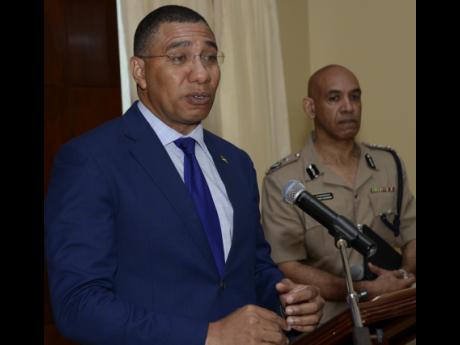 File
Prime Minister Andrew Holness announcing the imposition of a state of emergency for St James, Hanover, and Westmoreland during a press conference at Jamaica House on April 30, 2019. Looking on is Antony Anderson, the commissioner of police. 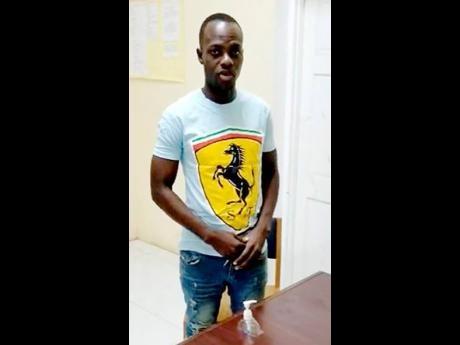 There are questions over whether the Jamaica Constabulary Force fabricated a scenario under which it could arrest a man who had used an online platform to send an expletive-laden message, aimed at Prime Minister Andrew Holness. The man was not charged, and his family has responded with dismay about the potential human rights violations involved in the process.

ST ANN resident Shaquille Higgins and his family have threatened to file a lawsuit against the police and the Jamaican Government after he was arrested and cajoled into submitting a public apology for a foul-mouthed tirade against the prime minister.

The confirmation came as Commissioner of Police Major General Antony Anderson ordered a probe into the controversial detention, which the lawmen had said was linked to a suspected case of larceny.

Central to the lawsuit may be whether the allegations were trumped up.

Attorney-at-law Charles Ganga-Singh, who is representing the 24-year-old Moneague resident, has charged that the police action was “a worrying trend” of state overreach. The prospective suit could have at least four claimants, he said.

“It is a human-rights issue,” Ganga-Singh told The Gleaner in an interview Wednesday evening.

Higgins and his family are also reportedly intimidated.

“They are also in fear of the police based on the invasion of their house at 11 p.m.,” Ganga-Singh said.

In a video posted on social media earlier this week, Higgins was captured spewing invective against Prime Minister Andrew Holness over a tightening of curfew hours to curb the transmission of COVID-19.

Another video showed the police detaining Higgins at his home and taking him to the Moneague Police Station.

On Wednesday, Senior Superintendent of Police Stephanie Lindsay, head of the police Corporate Communications Unit (CCU), told The Gleaner that Higgins was subsequently released without charge.

The latest incident is the third in 15 months where Jamaicans have blown their top, aggrieved by the strict coronavirus regulations that

It has also raised questions about the independence of the police force under the leadership of Anderson, a confidant of Holness and his former national security adviser.

In April 2020, Dayne Mitchell, a Jones Town, St Andrew, resident, was arrested after a video went viral showing him uttering foul language at Holness. He was one of several persons detained islandwide under the Disaster Risk Management Act. He was fined.

In March 2021, the police’s Counter-Terrorism and Organised Crime Investigation Branch carried out an early morning raid at the home of St Ann pastor Peter Chambers after he had posted videos predicting the death of Andrew Holness. Chambers was later released without being charged.

Ganga-Singh said the action by the police in these instances is cause for concern.

Former Member of Parliament Raymond Pryce, in a release on Tuesday, said the commissioner of police must “confirm what basis in law or policy authorises a police officer, a sergeant at that, to be dictating to a citizen the words that that citizen should say into a recording, which takes place in a police station and which is then circulated to members of the public”.

Anderson, in an internal memorandum sent to all staff, reminded all JCF members that breaches of the law must be dealt with in accordance with guidelines.

“Today, the commissioner reminded members that apologies are not to be solicited or coerced from members of the public. He’s insisting that if an individual elects to apologise voluntarily, they may do this by their own means and circulate themselves, void of the police’s participation,” the CCU said.