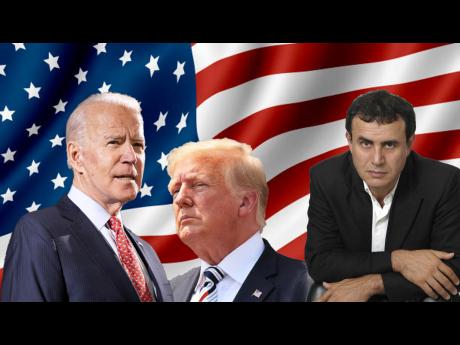 Nouriel Roubini (right) compares the economic policies of US President Joe Biden (left) and Donald Trump, with some surprising conclusions.

NEW YORK – About half a year into Joe Biden’s presidency, it is time to consider how his administration’s economic doctrine compares to that of former President Donald Trump and previous Democratic and Republican administrations.

The paradox is that the “Biden doctrine” has more in common with Trump’s policies than with those of Barack Obama’s administration, in which the current president previously served. The neo-populist doctrine that emerged under Trump is now taking full form under Biden, marking a sharp break from the neoliberal creed followed by every president from Bill Clinton to Obama.

Trump ran as a populist – commiserating with left-behind white blue-collar workers – but governed more like a plutocrat, cutting corporate taxes and further weakening the power of labour vis-à-vis capital. Nonetheless, his agenda did contain some truly populist elements, particularly when compared to the radically pro-Big Business approach that Republicans have pursued for decades.

While the Clinton, George W. Bush, and Obama administrations each differed in their own way, their basic position on key economic-policy questions was the same. For example, they all advocated trade-liberalization agreements and favoured a strong dollar, seeing that as a way to reduce import prices and support the working classes’ purchasing power in the face of rising income and wealth inequality.

Each of these previous administrations also respected the US Federal Reserve’s independence and supported its commitment to price stability. Each pursued a moderate fiscal policy, resorting to stimulus (tax cuts and spending increases) mostly as a response to economic downturns. Finally, the Clinton, Bush, and Obama administrations were all relatively cosy with Big Tech, Big Business, and Wall Street. Each presided over the deregulation of goods and services sectors, creating the conditions for today’s concentration of oligopolistic power in the corporate, technology, and financial sectors.

Together with trade liberalization and technological advances, these policies boosted corporate profits and reduced labour’s share of total income, thereby exacerbating inequality. US consumers benefited from the fact that profit-rich businesses could pass along some of the gains reaped from deregulation (through lower prices and low inflation), but that was about it.

The Clinton, Bush, and Obama economic doctrines were all fundamentally neoliberal, reflecting an implicit belief in trickle-down economics. But things started to move in a more neo-populist, nationalist direction with Trump, and these changes have crystallized under Biden.

While Trump was more heavy-handed with his protectionism, Biden nonetheless is pursuing similar nationalist, inward-oriented trade policies. He has maintained the Trump administration’s tariffs on China and other countries and introduced stricter “buy-American” procurement policies, as well as industrial policies to re-shore key manufacturing sectors. Equally important, the broader Sino-American decoupling and race for domination in trade, technology, data, information, and the industries of the future has continued.

Similarly, although Biden has not formally followed Trump in demanding a weaker dollar and browbeating the Fed to finance the large budget deficits created by his policies, his administration has also enacted measures that require closer Fed cooperation. Indeed, the United States has moved into a de facto, if not de jure, state of permanent debt monetization – a policy that began under Trump and Fed Chair Jerome Powell.

Under this arrangement, if inflation were to rise moderately, the Fed would have to adopt a policy of benign neglect, because the alternative – a tight anti-inflation monetary policy – would trigger a market crash and a severe recession. This change in the Fed’s stance represents another sharp break from the 1991-2016 era.

Furthermore, given America’s large twin deficits, the Biden administration has given up on pursuing a strong-dollar policy. While it does not favour a weaker greenback as openly as Trump did, it certainly would not mind a currency shift that could restore US competitiveness and reduce the country’s surging trade deficit.

To reverse income and wealth inequality, Biden favours large direct transfers and lower taxes for workers, the unemployed, the partially employed, and those left behind. Again, this is a policy that started under Trump, with the $2 trillion Coronavirus Aid, Relief, and Economic Security (CARES) Act and the $900 billion stimulus bill that passed in December 2020. Under Biden, the US has passed another $1.9 trillion stimulus package and is now considering $4 trillion of additional spending on infrastructure, broadly defined.

While Biden is pushing for more progressive taxation than Trump did, his administration’s ability to raise taxes is constrained. Hence, as under Trump, large fiscal deficits will again be financed mostly with debt that the Fed will be forced to monetize over time. Biden also will be channelling a public backlash against Big Business and Big Tech that started under Trump. His administration has already taken steps to curb corporate power through antitrust enforcement, regulatory changes, and eventually legislation. In each case, the goal is to reapportion some share of national income from capital and profits to labour and wages.

Biden has thus come out of the gate with a neo-populist economic agenda closer to Trump’s than to that of the Obama administration. But this doctrinal shift is not surprising. Whenever inequality becomes excessive, politicians – of both right and left – become more populist. The alternative is to let unchecked inequality become a source of social strife or, in extreme cases, civil war or revolution.

It was inevitable that the US economic-policy pendulum would swing from neoliberal to neo-populist. But this shift, while necessary, will bring risks of its own. Massive private and public debts mean that the Fed will remain in a debt trap. Moreover, the economy will be vulnerable to negative supply shocks from de-globalization, US-China decoupling, societal ageing, migration restrictions, the curbing of the corporate sector, cyber-attacks, climate change, and the COVID-19 pandemic.

Loose fiscal and monetary policies may help to increase labour’s share of income for now. But, over time, the same factors could trigger higher inflation or even stagflation (if those sharp negative supply shocks emerge). If policies to reduce inequality lead to unsustainable increases in private and public debts, the stage could be set for the kind of stagflationary debt crisis I warned about earlier this summer.

Nouriel Roubini is CEO of Roubini Macro Associates and Co-CEO of TheBoomBust.com.