Ward Theatre marks the spot for welcome to the city 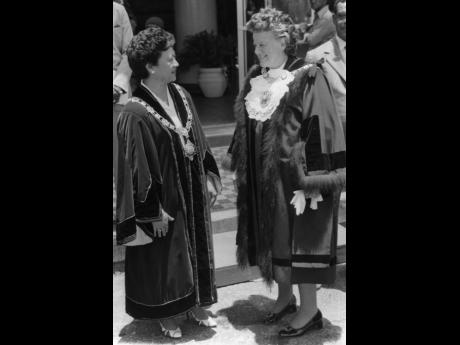 File
Councillor Colleen Yap (left), Mayor of Kingston, and Dame Mary Donaldson, Lord Mayor of London, speaking informally on Monday, August 20, 1984, outside the Ward Theatre in Kingston just before the start of a civic ceremony in honour of Dame Mary, who was presented with the Keys to the City of Kingston. 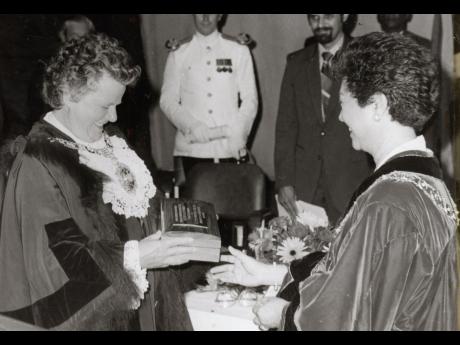 When London’s Mayor was given the key to the City of Kingston in 1984, the ceremony was held in a building befitting such ceremonies. The Ward Theatre was in all its glory in the early 1980s, just take a look at this story of pomp and ceremony.

Lord Mayor of London presented with key to Kingston

Dame Mary Donaldson, Lord Mayor of London was presented with the Key to the City on August 20, 1984, at a civic ceremony held at the Ward Theatre in downtown Kingston.

The presentation was made by the Mayor of Kingston Councillor Colleen Yap.

Before the presentation, a resolution adopted by the Kingston and St. Andrew Council was read by the acting Town Clerk, Mr. Philip Duncan. The resolution noted the good will which existed between the cities of Kingston and London and stated that the Key to the City of Kingston was being presented as a token of the high esteem in which the City of London was held.

In accepting the Key, which was made from Jamaican wood, Dame Mary read a resolution passed by the Court of Common Council (the equivalent to the KSAC Council) which expressed the hope that her visit to Jamaica would serve to strengthen the bonds of friendship, understanding and trade which existed between two members of the Commonwealth.

Earlier in the welcoming address, Mayor Yap told the gathering of the KSAC Councillors and staff, diplomats and members of the public that Dame Mary had chosen Jamaica as one of three countries for her overseas tour.

She assured Dame Mary that although Jamaica was unable to compete with the United States and Canada, the other countries on the tour, in terms of physical structures and factories. Jamaica could offer the national beauty and warm hospitality of its people which could not be surpassed anywhere else.

Afterwards, the Mayor of London and her party were treated to a short programme of entertainment which featured song, dance, and speech performed by members of the Tivoli Gardens Community Centre, the Oxford Street Dancers, Evelyn Chronicle who did an excerpt from “Macbeth”, Oliver Samuels and The Tivoli Gardens Kumina Group, among others.

Before the start of the official function, Dame Mary, who wore her ceremonial robe and chain, inspected guards of honour formed by members of the KSAC Fire Brigade and the Traffic Warden departments.

Music for the ceremony was provided by three marching bands – St. Anne’s, Urban Upgrading and the Tivoli Band. The Jamaica Military Band provided music for the civic function.