Knox College opens its doors for excellence to pour through 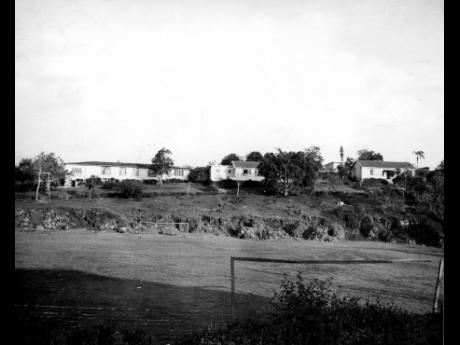 A PANORAMA of Knox College; scene across the playing field showing dormitories.

Clarendon and Manchester have benefitted from the very high standards set by a certain Knox College over the last 74 years. But how did it all start? The Gleaner was there on that fateful September morning when Knox College was born.

AS THOUGH recalling; the atmosphere in which John Knox the famous Scottish reformer and historian performed his great work, a hazy mist shrouded the mountain summit in Spaldings, near the Clarendon-Manchester border as Mrs. H. M. Foot, wife of the Colonial Secretary "turned a key and officially opened the college building, bearing his name—Knox College.

People swarmed in from all parts of the island representing every section of Jamaican life. The list of visitors was headed by Mrs. Creech Jones, wife of the Secretary of State for the Colonies; Mrs. Foot, the Hon. J.B Thursfield; Custos of Manchester and Mrs. Thursfield; Mr. W. D. Linton. MHR, north-western Clarendon and the Hon. B.H. Easter, Director of Education.

In the unavoidable absence of Mr. G. Louis Byles who is now on a visit to Switzerland, the opening ceremony was chaired by Mrs. Kenneth Hart, wife of Dr. Hart.

Light showers and heavy mist in the early afternoon did not dampen the spirit of the people. It was a step forward in the educational field, not only for Clarendon but for the island on a whole. The fair, which accompanied the opening, went on well into the night and was followed by a dance for which Miss Ivy Graydon and her harmony makers played.

Due to preparations for the visit of the Secretary of State to Clarendon, the Custos, the Hon. AM Pawsey, and many other prominent people were unable to attend.

Speakers in one accord acclaimed the achievements of the Presbyterian Church in the field of education and more so for the milestone they had reached in establishing Knox College at a place which is conducive to good living and high thinking with the necessary outlay for vast improvements.

Mr. Lewis Davidson, the principal, was congratulated for his great work in convincing the Presbyterian authorities of the need for the college in Jamaica. His assistant, Mr. David Bent, also shared in the praise for his untiring work to get the institution going.

Following a short service conducted by the Rev. Mr. Gray, Mrs. Hart welcomed and introduced the guest. She said they had hoped to have His Excellency the Governor and Lady Huggins and Mr. Foot and many other prominent people at the ceremony but they were kept busy by the visit of the Secretary of State to the island. They had had from His Excellency and Mr. Foot not only their regret for not being able to attend but charming letters wishing the venture a success.

They had not dreamt of welcoming Mrs. Creech Jones at the function so soon after her arrival in the island (applause). They were extremely pleased to have her with them.

Mrs. Hart went to speak of the great debt they owed to the Presbyterian Church in Jamaica for their vision to see the educational need and the courage to go ahead to meet it. In all their plans for the college they had tremendous and vital support from the church of Scotland as well as from the church in Jamaica.

They had many such persons on the Board of Governors. They were grateful to them all for the great assistance they gave and are still giving.

Speaking of the response the people had given to the college's appeal, she said the gathering at the fair spoke for itself. Having been present at the college for the first term, she could bear witness to the wonderful response to the call for students and to the great teaching they were being given.

The church had had the supreme good fortune of having as their principal Mr. Lewis Davidson. She did not think they could find anywhere B more splendid first assistant than Mr. David Bent, and with both those gentlemen they should associate the names of their splendid wives who gave fully, of every type of services.

To be headmaster of a school was one thing. There were various duties which would fall to their lot. But they had in the two gentlemen, men who would turn their hands to do anything and that was why they were so pleased in having them.

MM. Foot said she was very proud indeed in being given the privilege of opening the door of the colllege. As she came in the premises Mrs. Creech Jones was just coming in and she asked her to open the door of the college but the said no as the was without a hat.

In her anticipation of the visit she thought that her husband would be there with her and he would do all the public speaking, thus she would be able to enjoy herself. But out of the clear she saw a cloud and that cloud took shape when it was announced that His Majesty's Secretary of State for the Colonies would visit the island at the same time.

She knew in a flash that her husband would not come and that she would have to do the public speaking. When the trap was closed on her she tried several means to get out, but was couched with such charm that she felt pretty badly. There were the gentlemen around her such as Mr. Easter and Mr. Linton who had spent the better part of their time beguiling cast assemblies with their homed tones who would not be outdone and therefore they should not expect much from her.

As she opened the door of the college, she said it seemed to her that the spirit of John Knox was with them. It seemed to be right that that seat of learning should be dedicated to that great reformer, the man with the burning eyes and long beard, who lived his life battling against the forces of superstition. All educationists, whether they like it or not, are side by side with the reformer.

They are battling against the forces superstition.

At this stage., Mrs. Foot whipped up some added humour in her speech, in her references to the Director of Education. She went on to urge those in charge of the college to give credit when it was due to students and quoted school stories to demonstrate

its benefits. Mrs. foot told the students that there was the privilege of creating a tradition. Their teachers and their well-wishers

could not do it for them. It was for them and they alone to build up a reputation and create a tradition which would be a shining glory in Jamaica.

Mr. W.D. Linton as MHR for the constituency in which the college is situated, welcomed the guests. He had heard as he sat in the corner that Mrs. Foot would speak and he was somewhat different, wondering what she was going to say. He was sure that she had made a great speech. A great speech, not from multiplicity of work but from the sincerity in which she gave it.

He knew that Mrs. Foot’s influence in other parts was going to assist them at the college. He was greatly heartened to see the large gathering that had turned out to the opening.

He wanted to tell Mr. Davidson that the presence of so many people there was indicative of two things. One, the great need for education and that the people, not only in Clarendon but all over the island were prepared to give all the support that Knox

College and others throughout the island would need in the future.

As he saw the Director of Education on the platform he knew that despite the feet that they had had several directors of education who had been interested but he wanted to say of Mr. Easter that he was always willing to give a hearing to people when they brought sound proposals to him. As he saw him at Knox College, he was greatly encouraged to go back to the councils and ma lee proposals for the college.

He was sure that Mr. Easter was one person who would do his best.

Most of his hearers did not know of the pioneering work done by the Director, but he liked that sort of thing. By the opening of Knox College, in the centre of the island, had set a beacon light on education that would burn brightly not only for the entire island.

Mr. Linton made apology for the unavoidable absence of the Custos of Clarendon and went on to speak of the church’s part in the advancement of education. He finally pledged as MHR for Northern Clarendon to do all in his power on behalf of the college and assured the gathering that it would receive the full support of his constituents.

Mr. Easter spoke on behalf of the education department. He said the department appreciated the establishment of the college and while he could give no definite promises, he was sure that if the college proved its worth, those in authority would do what was possible to give assistance.

The Hon. J. B. Thursfield spoke of the advancement of education in England and Scotland at the instance of the churches, which was taken over in latter years by the government. But the churches were coming in again. He was glad they were. He wished the college every success as well as those who would work in it.

Tile principal, Mr. Lewis Davidson outlined plans for the future. He said that in his opinion, if an old man or an old woman wanted to learn something, it was the duty of the school to teach them and give demonstrations for their benefit. That would be the policy of Knox College.

Mr. Davidson also spoke of the struggle -in getting things into shape and of the arduous work done by Mr. David Bent his assistant. He said he had never worked with a greater Jamaican. He thanked Mrs. Foot and all other guests who had come and given them encouragement, and each and everyone for their kindness, sympathy and generosity.

Mrs. Hart made the closing remarks and the function came to an end with the singing of the National Anthem.