The economic risks of Pandexit 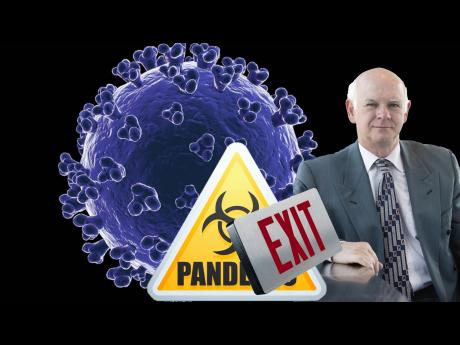 EDINBURGH – People have been using “exit” as a suffix for a decade or so. Grexit, referring to a potential Greek departure from the eurozone, was the first to emerge. Italexit made a brief appearance and has recently been revived on the Italian right. But neither has come to pass. Nor has Frexit, or France’s unilateral withdrawal from the European Union. The far-right politician Marine Le Pen previously flirted with the idea, but then let it drop. And the only candidate in the 2017 French presidential election who advocated it, François Asselineau, won just 0.9% of the vote.

Such exits seem to put off most continental Europeans. To date, only Brexit has actually happened, even though polls in the month before the United Kingdom’s June 2016 referendum showed that more French than British voters were unhappy with the EU, by a margin of 61% to 48%.

All these potential and actual exits were regarded by most economists as undesirable. Now another is under discussion that everyone hopes will happen: Pandexit. This unsightly portmanteau encapsulates the optimistic idea that we can soon hope to put the COVID-19 pandemic behind us, and go back to kissing casual acquaintances (on the cheek at least) and jamming ourselves like sardines into trams and trains in cities from New York to Tokyo.

There is little doubt that, in economic terms, the first-order consequences of a return to normal social interactions will be positive. Researchers at the Bank for International Settlements (BIS) estimate that the pandemic caused an 8% output loss in developed countries in 2020, and project a further decline of just over 2% this year. Relaxation of travel and other restrictions should deliver a powerful recovery in 2022, although its extent will vary greatly across countries depending on infection and vaccination rates. And, of course, a general upsurge in infections or reinfections could produce a third wave of economic pain if further restrictions on activity were required.

Moreover, not all of Pandexit’s economic benefits will be unalloyed. Central bankers, who are skilled at turning opportunities into problems, are already worrying. While their baseline economic scenario is positive, they see significant risks. “Policymakers still face daunting challenges,” the general manager of the BIS, Agustín Carstens, said recently. “Public and private debt is very high, and the pandemic’s adverse legacies are large.”

Carstens’ key point is that the economic damage created by COVID-19 has been mitigated by “unprecedented macroeconomic policy accommodation”: very low interest rates and massive doses of quantitative easing, along with “ample” fiscal support. The degree of budgetary assistance has varied from country to country and is much greater in the United States than in Europe, for example. But government debt has risen sharply everywhere and is now at unprecedented levels in countries like Italy and Japan.

Against this background, the BIS has identified two dangerous downside scenarios. The first is essentially epidemiological: new coronavirus variants may emerge, necessitating further lockdowns and fiscal support, which might be infeasible for some governments. But in my view, further lockdowns will prove to be politically impossible. So, if new virus mutations spread rapidly, we will need to muddle through as best we can, and hope that vaccinations minimize additional deaths.

The second downside scenario, which I regard as much more plausible, is that current price pressures intensify and inflation rises further, eventually requiring a monetary response. US consumer price inflation was 5.4% in the year to July. The Baltic Dry Index, which tracks shipping rates for dry commodities, is up by about 170% this year. And supply constraints are emerging in many regions.

The official line from the US Federal Reserve and other central banks is that this inflationary surge is transitory. But as the French adage has it, “rien ne dure comme le provisoire” (nothing lasts like the temporary). If the current central bank consensus is wrong, as former US Treasury Secretary Larry Summers and others believe it to be, there could be trouble ahead.

Monetary tightening during Pandexit will have more than usually serious consequences. Because central banks have hoovered up so much government debt, the average maturity of government bonds has effectively shortened, so public-sector balance sheets are more sensitive than usual to changes in short-term interest rates. Governments will not be happy with their countries’ central bankers for tightening policy, because this could have direct fiscal consequences.

In addition, monetary tightening in the developed world, especially the US, will be highly undesirable for emerging markets. Most are still struggling to control the pandemic and have much lower COVID-19 vaccination rates than Europe or North America, notwithstanding recent welcome signs that rich countries are now more willing to share their vaccine stocks.

In responding to the pandemic itself, we have all faced similar challenges, and the mix of policies governments have used has been broadly the same. In the Pandexit period, all that could change. Measures that might make sense for countries with low COVID-19 infection rates and manageable public debt could spell economic disaster for others.

Carstens thus calls for normalization of monetary policy “to be very gradual,” though he also, as one might expect, asserts the primacy of inflation control and central bank independence. He might have added that we will need more international policy coordination, something that has scarcely been in evidence in the last year and a half. The BIS itself has a job to do.