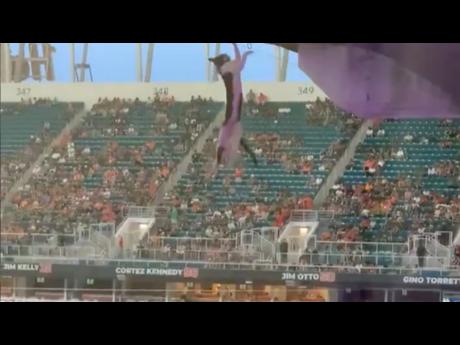 A cat was saved by fans at an American football game after it plunged 30 feet from the upper deck of a stadium in Miami.

Footage showed the moggy falling to the lower level of the Hard Rock Stadium during Saturday's college game between No22 Miami and Appalachian State.

Fans used an American flag as a makeshift net to safely catch the black and white feline.

Craig Cromer, who brings the flag to every home game with his wife Kimberly, said: "They were trying to grab it from above and they couldn't reach it, but they were scaring it downward.

"It hung there for a little while with its two front paws, then one paw, then I was like, 'Oh my goodness, it's coming soon.'"

Cromer was able to unhook the flag and the cat fell into it before being taken away by the stadium's security staff.