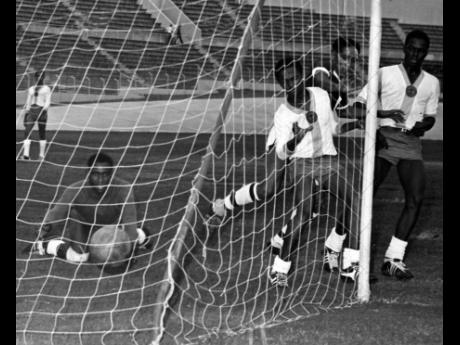 File
FIRST OF THE FIVE: Peter Morgan (JC) outside right (second from right) follows through on a shot and succeeds in steering the ball past the groping Ardenne keeper David White for the first goal in the Manning Cup Match at the National Stadium on September 16, 1963.

Jamaica College is the winningest school in Manning Cup history, however, there aren’t many who understand just how dominant the institution has been, even with the number of titles they have won in the last decade. So dominant were Jamaica College just after independence, that this Gleaner article counted a 10-0 win for the Hope Road institution, a bit of a scrap.

Defending Manning Cup champions Jamaica College crawled to a 10-0 win over newcomers Ardenne in their opening match of the Manning Cup season at the National Stadium yesterday.

Although JC scored as many goals as expected, they could have scored many more had they played a more attacking and constructive game. More often they relied on the slips of the inexperienced Ardenne team than on their own efforts.

Indeed, in the first half, which ended 2-0, Ardenne tried hard, especially Leebert Angus at outside right and inside Roger Wong.

J.C.’s first goal came in the 16th minute when Everton Webb (OL) headed in a centre from Peter Morgan (OR). A few minutes later, Ardenne made a breakthrough but not to much avail as the ball went out of touch. Mignott made it 2 in the 21st minute from a Morgan centre. JC looked scrappy for the rest of the half while the Ardenne boys continued trying and allowed no further scoring.

On the resumption, JC put a little more attack into their game which was sufficient to overwhelm Ardenne. In the 42nd minute, Mickey Mowatt at inside right weaved his way through to just inside the area and took a good shot which gave keeper White no chance. Two minutes later, Morgan capitalized on a shot from inside right Werrick Lyn which bounced out of the goalie’s hand to make it 4-0.

White brought off a good save shortly after when Morgan shot to him just about seven yards out. It was Morgan however who put in the next two to complete his hat-trick and put JC at 6-0.

The first of these was whenLyn centred from an outside left position for him to head home in the 48th minute and the second was a high shot from the right-wing which rolled out of the keeper’s hands into the goal in the 55th minute.

Ardenne then found a little aggressiveness and ward off the attacks, especially on the side of the field where Roger Wong proved too much for Everton Webb (OL). It was Wong, too, who came close to scoring when he followed through and beat keeper Williams to the ball, but not getting a chance to shoot saw the ball trickle past the right upright.

Then in the space of six minutes, JC banged in four more. First Minott travelled down to the area and beat White in the 63rdminute; he then blasted home a centre from Mowatt in the 65th and 69th minute to put up the double-figure.