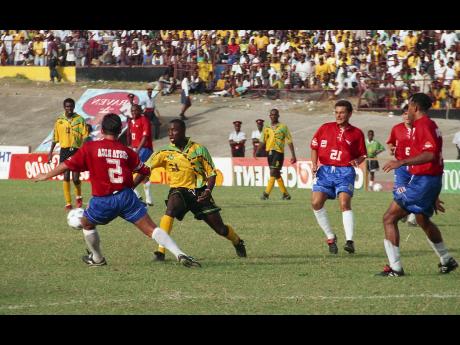 File
Action from the Jamaica vs Costa Rica World Cup qualifier match at the National Stadium on September 14, 1997.

With less than a year to go before the 1998 World Cup in France, the collective pulse of the country had quickened. The Reggae Boyz were the fastest-rising brand in football and the team had improved so significantly, that a place in football’s showpiece was becoming an inevitability. Capture some of that spirit in this Audley Boyd piece from some 24 years ago.

So close to France

JAMAICA moved closer to a berth in next year’s World Cup finals in France when they clipped Costa Rica 1-0 on a 56th-minute goal by Deon Burton, in their return qualifying tie at the National Stadium yesterday afternoon.

Rene Simoes, football’s technical director here, told journalists at a press conference after the game: ’You won the game, you beat Costa Rica, we have 11 points, we are so close to France, you have to celebrate.’

The victory, the third in a row and second in a week, lifted Jamaica to joint first position on points in the six-nation elimination that will decide the three finalists from CONCACAF. They were once bottom of the standings after failing to win any of their first four games but with yesterday’s success, Jamaica now share the front-running position with Mexico and are two points ahead of the United States, and El Salvador who thrashed Canada 4-1 in San Salvador yesterday. The Canadians had lost 1-0 to Jamaica a week earlier.

“We have a mission,” Simoes added. “Our mission is not only money. I can say before the mission for this team was only money. But now it’s changed. These players are now convinced they have to do something very special for this country.”

It is the farthest Jamaica have advanced in a World Cup campaign. Their next game will be against the United States in Washington on Friday, October 3 and Paul Hall, a British-based striker in the Jamaican team, said:

“The United States will be definitely ready for us. They are a good team, especially at home. We can go there feeling really confident, not overconfident, but we’ve got that belief in ourselves.”

Costa Rica’s coach, Juan Luis Hernandez, also believes Jamaica are on course for France. Speaking through an interpreter, he said:

The loss for Costa Rica, the long-time second placed team in this final round qualifiers, almost signalled the end of their quest, mainly because one of their two remaining games will be against the only team to have won away from home, the strong Mexicans who are seeking their 10th berth in the finals. That game will be played in Mexico.

They gave everything they had while dominating the homesters but could not make the all-important goal against a stubborn Jamaican defence anchored by midfielder turned sweeper Christopher Dawes, who filled the role of Durrent Brown who served a one-game suspension for yellow card offences.

While unable to compose the defence and team in the way Brown would have, Dawes, a former forward/attacking midfielder, did not take any chances and made his and Jamaica’s most telling play with his only advance from the backline. It led to the goal. Dawes beat three opponents down the middle on that play then passed to Hall, who gave Burton an angled scoring opportunity.

Burton opted to chip a pass to Hall and luckily, it deflected off a defender’s boot and spooned out of reach of Costa Rica’s custodian Erick Lonnis, who had left his line to intercept a pass that never came.

The goal came in one of few good offensive moves by the competitive home team, which found it very difficult to breach the close marking and high press defence of the Costa Ricans, after looking promising and confident in the first five minutes. Those tactics effectively shut down Jamaica’s short passing game and when they opted for long passes, the front running duo of Hall and Burton were nullified with good challenges, especially in the first half.

Other than the offensive lift provided by Dean Sewell, who replaced Malcolm, the goal and an all-out salvo of long clearances amidst shop locking to ensure three points, Jamaica’s game was not much different in the second half.

Costa Rica, on the other hand, continued to run excellently off the ball to dominate possession and progress threateningly, but lacked the killer instinct that could only have been delivered with good headed finishes on at least three occasions in the first half; and a near range shot from Hernan Medford only a minute after Jamaica had scored, that Warren Barrett did very well to save.

“4I hope Jamaica can keep this rhythm, this pace of the game anywhere,” Simoes said.

“There is no man to score the goals, this team must win. This is God’s work, this is not Rene Simoes work. Don’t think this is for my glory. This is for God’s glory. God has a plan for this country,” he said.