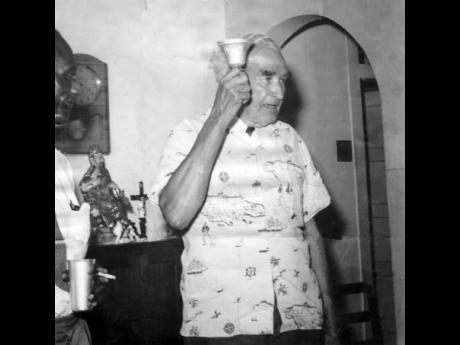 File
VICTORY BELL: Sir Alexander Bustamante solemnly ringing the "Bell" at his Tucker Avenue residence on  September 19, 1961, when it became obvious that his campaign would be crowned in the results of the first-ever Referendum in Jamaica. Looking on admiringly (left) is Mr Robert Lightbourne, one of Sir Alexander Bustamante’s lieutenants in the campaign. 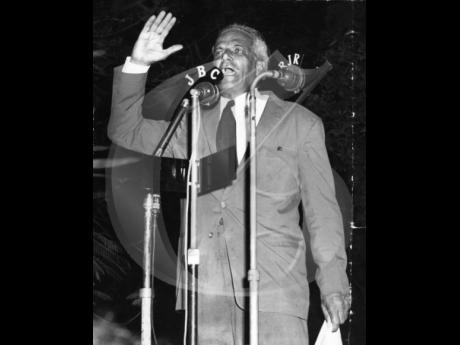 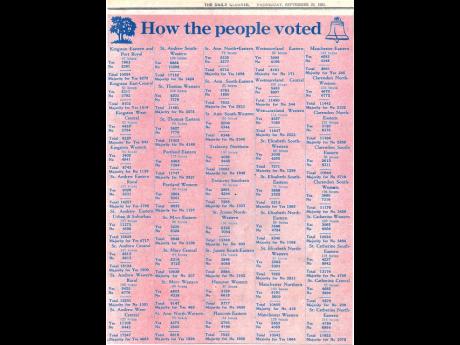 The Caribbean’s first attempt to replicate the idea of strength through unity ended in abject failure as Jamaica voted against coming together with its Caribbean neighbours in a Referendum that spelled the end of the political career of one of the greatest participants in the process ever seen. A one Norman Washington Manley, who would later be counted, a National Hero.

The People Vote Against Federation

THE ELECTORATE of Jamaica on September 19, 1961, answered the referendum question with a decisive “No”. Bells were rung throughout Jamaica from Negril Point to Morant Point.

The people had been asked to answer the question:  Should Jamaica remain in the Federation of the West Indies?

But clear as the answer was from those who voted yesterday, a clearer picture of mind of the Jamaican people was shown in the final votes that of Jamaica’s parishes, only four – Kingston, St. Andrew, St Ann and Manchester voted in the majority for continued participation in the Federation and of Jamaica’s 45constituencies, 31 voted in favor of Jamaica’s withdrawal from the Federation and 14 voted in favour, a bigger margin than the PNP’s victory over the JLP in 1959.

The record poll which had been expected by many political observers did not materialize, al-though the poll was much larger than the poll in 1958 when the JLP won 12 of Jamaica’s 17 seats in the Federal House of Representative in a 53-percent poll.

Yesterday, in the quietest “election” day yet observed in Jamaica, 468,335voters out of a possible total of 774,759 went to the polls – 60. 4% of the voting population.  Of this total vote 53. 8% of the people voted against continued participation in the Federation and 46.2%  voted for continuation

The bulk of the people voting “yes” other than in the parish of St. Ann, were from the urban areas of Jamaica, with Kingston and St. Andrew giving a lead to the PNP, but the lead was not sufficient to offset the avalanche of “Noes” which came in from the rural areas.

The result was that within one hour after the counting of the votes had got underway, while PNP partisans were giving the victory to the PNP on the basis of the Corporate Area returns, knowledgeable observers were able to predict a definite victory for the “Noes”.

When the referendum question was negatived, the Hon. Norman Manley, Q.C, Premier of the Jamaica and principal protagonist of continued participation in the Federation said, “The people have decided finally”

Sir Alexander Bustamante, Leader of the Opposition and principal antagonist of continued participation in the Federation declared: “We told the people the truth about the dangers of Federation and they accepted it”.

There was jubilation JLP AND PPP camps; there was subdued reassessment in PNP circles.

Voting started out yesterday morning very slowly.  Indeed it was so slow that up to 11 o’clock only a minority of voters had cast votes in any of the island’s 4,000-odd polling stations.  Prospects of an unprecedented poll dimmed in the face of this early apathy of the island’s voters, and this was particularly marked in the Corporate Area.

But after 11 o’clock things began to pick up and voters began to turn out in areas where it appeared to political observers that it would do the pro-Federationists no good.  In fact even in the slow polling of the Corporate Area yesterday it was marked that the heaviest polling in the early hours were in Western Kingston and South-West St. Andrew.

Incidents were few and far between during the actual period of polling.  It was after the poll results that the demonstrations started which in the Corporate Area and police squads tried to keep demonstrations off the streets.  In the island’s main capitals, anti-federation supporters erupted into the streets, ringing bells, shouting cries of “Freedom”.

In most cases, the police removed the demonstrators quickly off the main streets, but in odd corners of the city and in some rural towns, bells continued the rung and children who had no bells beat with sticks and stones on tin-cans  making a tintinnabulation in accompaniment to the victory shouts of their elders.

At Drumblair, home of the Hon. Norman Manley Q.C., the atmosphere was subdued when the trend of the referendum became a steady final “No”.  When it was clear that, so far as the referendum was concerned, all was lost Mr. Manley went into a huddle with his Ministers who were present.  They were the Hon. Willis O. Isaacs, the Hon William Seivright, the Hon. Keble Munn and the Hon. Florizel Glasspole.

At Tucker Avenue, Sir Alexander Bustamante, surrounded by most of the principal lieutenants, was in high spirits are there was an impromptu celebration party.

And since the outcome of the referendum was known, without doubt, by 8 o’clock and police vigilance was at peak, the night petered out with just a few incidents of violence reported.

The Chief Electoral Officer, Mr. O. M. Royes, decided to close down at 10 o’clock, when only two constituencies’ preliminary final counts had not come in.

“It is not really patting ourselves on the back,” he said, “but I would say we have broken all previous records for the results to come in.  It is most gratifying that the unstinted efforts of Returning Officers and all election workers have resulted in the machinery working so smoothly.  As far as the voting and the coming in of the results are concerned we have done our part.”