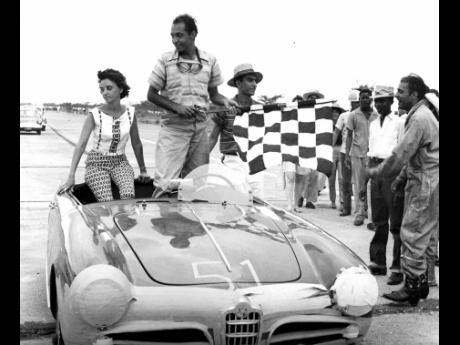 File
RICHARD SIRGANY with the checkered winner's flag as he stands with his wife Yvonne in the Alfa Romeo he drove to victory in the 55 mile Jamaica Grand Prix at Vernam Field on Sunday, September 24, 1961.

Track and Field, cricket, football have been staples of the Jamaican landscape for a long time but the sport of motor racing also has a long history with names Machado, Sirgany and Vernam Field counting themselves as almost household by 1961 when The Gleaner recounted the events of that year’s Jamaica Grand Prix.

RICHARD SIRGANY had his second major motor racing success yesterday when he drove his red Alfa Romeo to victory in the gruelling 55-mile Jamaica Grand Prix at Vernam Field.

Sirgany's first big victory was in 1959 when he covered a course five miles shorter than the present one in 54 minutes 2 seconds driving a TR3 in an Auto Owners' Club meet. His time yesterday was 57 minutes 6.6 seconds.

Geoffrey De Pass trailed him 5.2 seconds away in an MGA and third was Vernon Miller also driving an MGA.

The race was a thriller from start to finish. Sixteen drivers lined up opposite their cars for the Le Mans start. And it was Benny Machado in an Austin Healey who led the field up to the Le Mans corner but then there was a near mishap as Machado's car spun crazily out of control in the bend. When he finally righted the car the rest of the field had roared past.

Machado, whose bad luck at Vernam Field has caused one of the curves in the circuit to be named "Benny's Bend", eventually had to retire with engine trouble.

Percy Hollins in his Lotus Elite started favourite and shot in front after the first lap. He opened a quartermile lead by the sixth lap but then had come into the pit for water. This was the first of four stops Hollins was forced to make, and though he even regained the lead at one time, he eventually finished a lap behind Sirgany who worked his way to the front by the thirteenth lap and never looked back.

He capped a good day by gaining places in two other events.

In the preliminary twenty lap race for Saloon Cars, Woody Myers driving a modified Morris Oxford finished first after the front suspension of Pat Alston's Wolseley gave way just when Alston seemed to have the race in the bag. Richard Machado in a Peugeot 404 was second, and Mike Fennell third, in an Austin Healey Sprite.

The results of this race will not be final until the judges have calculated the handicaps relative to the engine power of each car.

Jim Gore whose MGA was unplaced in the Grand Prix, had better luck in the Drag race a three-quarter mile straight run. His Corvette was first in 25 seconds. The results of the other races are: 7 laps Saloons (under 1,000 cc): Pat Alston (Peugeot), Richard Sirgany (Sprite), Richard Machado (Peugeot) 404).