Remembering the pomp and pageantry of colonial times 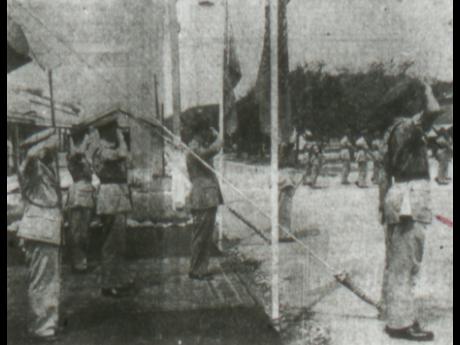 File
His Excellency the Governor Sir John Huggins, K.C.M.G., MC (between flags), Brigadier E.K. Page, Major Watt and Inspector Noel Croswell, A.D.C., are seen saluting the Colours of the 1st Battalion, the Gloucestershire Regiment, as the Colours were marched on parade at Up Park Camp on September 21, 1948 for amalgamation of the 1st and 2nd Battalions.

There was a time when the splendour of the motherland, England, was very much part of the rich traditions of Jamaica. Today, there are only vestiges of the same, but there was a time.

THE CEREMONY of amalgamation of the First and Second Battalions, Gloucestershire Regiment, took place with traditional colour, at Up Park Camp, yesterday morning.

The battalion’s designation is now the First Battalion, the Gloucestershire Regiment, (28th and 61st.)

The parade programme was carried out by troops, Colour Parties and Escorts.

The second Battalion (61st of Foot)paraded under the command of Lt. Col. R. J. Bewell, O.B.E., and formed three sides of a square.

Companies were under the command of Major Woorward, Major J.C. Bartlett and Capt. P.W. Weller respectively.  The Band of the Glosters stood at the western flank of the parade, and was the first unit to be marched on.

The 2nd  Battalion Colour Party and Escort under the command of Major A. J. A. Arengo-Jones, M.B.E., was marched on parade and formed up in front of the eastern flank of the Battalion.  Bearer of the King’s Colours was Capt. M.C. Denison.  The Regimental Colours were borne by Capt. T.S.W. Reeves-Tucker.

It was at this stage that the Governor arrived and took the Royal Salute, the Union Jack being unfurled atop a pole at the northern side of the parade ground.

The First Battalion ((28th of Foot Colour Party and Escort under the Command of Major A.H. Knight, M.B.E.  was marched on parade and formed up in front of the west flank of the battalion.  Bearers of the Colours of the 28th were Capt. T.A. K. Dillion, King’s Colours and Capt. W.A. Wood, Regimental Colours.

The big moment came immediately after the inspection, when Lt. Col. Bewell gave the order: “The 61st will take over the Colours of the 28th.”

Both Colour Parties advanced to the centre of the square in a slow march and while the remainder of the Battalion remained at the salute, both sets of Colours were exchanged.  The Colour Parties rejoined their Escorts and the original 61st Colour Escort became the 28th.

Order Of The Day

“In 1881, the two regiments were linked to become respectively the 1st and 2nd Battalions, The Gloucestershire Regiment but carried forward their identities and traditions and have jealously retained their continuity from the date of their original formation down to today.

“Throughout their existence, both have given long and valiant service, first to England and later to Great Britain and the British Commonwealth in all parts of the world, and during many wars.

“The newly formed in Battalion, The Gloucestershire Regiment 28th/61st)ensures by the amalgamation of its predecessors into itself, the continuance and history of both its famous forebears and will, in the future, carry on with pride their traditions and their glory.”

After reporting to His Excellency for permission, the Colours of the 61st were marched off parade and as soon as they left the amalgamation became officially effective, as well as the new designation.

The 28th Colour Party and Escort moved to a position in front of the northern flank of the battalion, and the Commanding Officer gave the order to troop the Colours around the Battalion.

The Troop having been completed, the Colour Party and Escort were marched off parade, led by the Drums and Fifes of the band, to the guard room, where the Colours were placed on display together with those of the late 2nd Battalion.

Finally, the companies were marched off to be dismissed.

A representative party of cadets under Major N. Wainwright and one of the Jamaica Battalion, witnessed the ceremony.