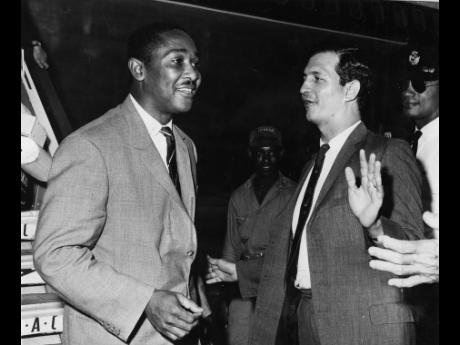 File
Edward Seaga (right), smiles as he welcomes home West Indies skipper Frank Worrell with open arms at the Palisadoes Airport on September 20, 1963. Worrell and the team had returned home to Jamaica after a fantastic six-month cricket tour of England.

The gargantuan stature the West Indies cricket team and its players took on between early 1960s and the mid-1990s is a wonderful example of how the Caribbean can find something to be proud of in themselves. Even as political and financial unity failed on the one hand with the ending of the Federation just two years earlier, the rise of the West Indies cricket team, led by its first black captain, Sir Frank Worrell, was something to behold and that was not lost on Jamaicans throughout Kingston in 1963.

Cheerful Pandemonium reigned in Kingston yesterday afternoon and evening as the West Indies cricket team arrived In Jamaica after their fantastically acclaimed six-month tour of England.

Skipper Frank Worrell and his men unruffled by an almost hysterical crowd estimated at which jostled them for almost three hours drove through the city “monarchs of all they surveyed” to a tumultuous climax to their tour at George VI Memorial Park at a Civic Reception, where Worrell received the keys of the City of Kingston from the Mayor Councillor Leonard Currey.

There the cars of the motorcade were mobbed and at times halted by thousands who had waited an hour longer than reckoned for the arrival of the heroes and the team never stopped smiling from 5.15 when their specially rescheduled BOAC jet touched down until the moment many hours later when they were at last allowed relative peace and quiet at the Flamingo Hotel where they are stationed.

The cricketers, who trounced England 3-1 in the five-match Test series and lost only two first-class matches for the entire tour, have been flown out by the Machado Sports Foundation for two festival matches in Jamaica, the first of which starts Tuesday, September 24

There may have been larger crowds of Kingstonians, but never has such exuberance been so widespread as yesterday The welcome was in direct contrast to the farewell at London Airport where after the normally festive British Press had tumbled over themselves coning superlatives for the "Calypso Cricketers” a handful of people (most of them officials) were on hand to see the visitors off.

The mood was provided by the University of the West Indies steel band from two hours before the scheduled 4:20 arrival. They had special reason too Frank Worrell Warden of Irvine Hall and Director of Sports at the UWI.

Expectation was piqued by the untimely arrival of two flights, both jets, whose majestic approach was picked up from far and cheered by the 2000-odd spectators at the airport, only to hear the intercom announce the unscheduled presence of a KLM flight from Miami and a Pan American from New York.

The third jet, which had been circling unnoticed in the sky for about ten minutes was greeted by a deafening blast of cheering and waving of flags caption Great victory welcome home who bearing a print of Worrell “It must be them now” said a small boy held aloft by an indigent father.

It was indeed the West Indies team, led off the gang-plank by a faintly smiling Worrell, followed by his wife and then Mrs. Rohan Kanhai the newest member of the team, who along with her popular husband occupied the spotlight in the final week of the tour by virtue of their sensational secret marriage which not even Kanhai’s roommate knew about.

A special roar greeted “terror twins” Wes Hall and Charlie Griffith, now the world’s most formidable pair of pace bowlers and who have left behind a trail of shattered wickets and shaken batsmen.

Meanwhile Worrell and the party were being greeted by the official welcome party, headed by the Minister of Development and Welfare, the Hon. Edward Seaga included in the party were Mr. Philip Sherlock, Vice Chancellor of the UWI, Trinidad High Commissioner Mr. Matthew Ramcharan and his first secretary Mr. Frank Adulla, the Jamaican Cricket Board of Control headed by president V C McCormack, Mr. Selwyn Walter, president of the University Student’s Guild, and Mr. Campbell Yearwood, Mr. Tony Player and Mr. Chris Wilson from Machado.

The unofficial welcome party was by them heading for the customs lounge, where they could get a closer view of the players as they went through the formalities of arrival.

Smiles flashed as bright as the flashbulbs as the cricketers, manager and assistant manager Berkley Gaskin and Harold Burnett, and Gleaner, Sports Editor L. D. Roberts (who covered the tour) were warmly met by personal friends.

Then started the move to the motor cars in the motorcade. The short trip took some time as the more forceful spectators pushed the cordon of policemen to the limit so as to be able to get a close-up of the players. Each of them was heralded by a cheer and innumerable handshakes and their outstanding performances of the tour were shouted from man to man and applauded. The Kanhai's were greeted with a shade more deference and smiling eyes keenly scrutinized Mrs. seems Kanhai, who assured of as great a popularity as her husband.

Eventually, the motorcade got underway-and from that point it was pure bedlam.

The drive from Palisadoes to the Park took well over two hours. Kingstonians from six to sixty of both sexes packed the route.

At Parade, one police inspector and one constable tried with transient success to control the crowd, which had swelled to about seven thousand by the time the motorcade, travelling along Windward Road, Victoria Avenue and East Queen Street, arrived at 6.50 p.m.

From the bonnets and backs of the moving cars, bold youngsters told their less fortunate chums the names of those who rode in them.

It had been a long wait. But there was no sign of impatience or fatigue.

At 5:15 traffic was blocked off from entering South Parade and diverted down Church Street, and sections of the crowd moved eastwards and took up vantage points by Coke Chapel. Press and Radiomen meanwhile roosted atop Kingston Parish Church clock tower.

J.O.S. buses were not exempt from the eagerness of the people, who scaled them for better view.

Twice false alarms were given as police radio cars led vehicles through the throng. But still no one minded.

At 6:40 however, wailing sirens heralded the approach of the real procession. By that time a traffic block at least two miles long stretched behind the team, and indeed the motorcade had almost reached George VI Park before reasonably free passage was possible at Rockfort and towards Harbour View. Cyclists and motorcyclists were meanwhile bobbing and weaving their way through the long string of traffic and several of the more opportunistic got unseated by the cramped crowds. The motorcade, led by the car carrying Worrell and his wife, Mr. Seaga and Mr. McCormack, took 20 minutes to pass through Parade, after which a few of the cars called it a day and headed for George VI by shorter, quieter routes.

The crowd at Parade then dispersed, happy and satisfied at having given their heroes the welcome they had been storing up for many weeks.

The pattern was the same all the way to their destination. Along the Spanish Town Road it was chaos as thousands crowded the car bearing Worrell, who until last season had been skipper of Boys' Town Senior Cup cricket team.

Up Maxfield Avenue, along Rousseau Road and Retirement Road to another blanket of people at Cross Roads and down Slipe Road,

At George VI Park the crowd may well have been able to fill the National Stadium, which holds 35,000.

Their Excellencies, the Governor General, Sir Clifford Campbell and Lady Campbell led the host of dignitaries and officials there.

All-rounder Garfield Sobers and Jamaican Alfred Valentine were the first on the platform amidst cheering which must have brought back memories of a similar greeting after the Australian tour in 1961.

All were besieged by young autograph hunters, and the cricketers obliged as many of them as time allowed.

Anxiety replaced expectancy as it was announced that the car carrying Kanhai, Butcher and Nurse had been damaged in the journey and the cricketers had gone to their hotel. They never reached the Park.

At 8.30 Worrell and party arrived to be met by Mayor Currey, acting town Clerk, Mr. Basil Daniels and KSAC public relations officer Mr. Wally Zink. Worrell was greeted at the top of the step by the Governor General and Lady Campbell, then escorted to his seat and the welcome ceremony began.