Security forces not equipped to handle the mentally ill 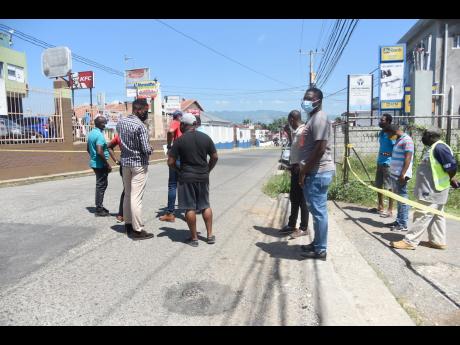 The scene were Detective Constable Paul Gordon was reportedly attacked and killed by a mentally ill man along King Street in the vicinity of the Linstead Market. The police officer had gone with a colleague to use an ATM, when 25-year-old Alwayne Shakespeare attacked him with a stone.

Security personnel are asking for help to deal with the mentally ill. There have been recent attacks on the police and civilians that have the lawmen concerned that they are not equipped to handle the mentally ill. Recent attacks have led to one policeman being killed after being struck in the head and another homeless citizen being beheaded.

Give me gunmen over madmen – cop

THERE IS seething discontent among rank-and-file police personnel about the lack of specialised training in interfacing with the mentally ill.

Recent violent confrontations involving mentally ill persons have seen two assailants killed by the police after allegedly attacking others, including a cop, with deadly consequences.

Despite countless complaints lodged to the heads of the Jamaica Constabulary Force (JCF), the lawmen said that their pleas have gone unanswered.

“How many situations like this have to happen before somebody seriously steps in and does something about it? Police officers are actually losing their lives! And it’s definitely something you have to deal with” one cop said.

Addressing The Gleaner on Monday on condition of anonymity because they are not authorised to speak on constabulary policy, police revealed that very few law enforcers have been trained to handle the violent behaviour of the mentally ill.

“I don’t even think it reach 50,”one officer exclaimed, saying that training has not been widely conducted.

They said they had only been trained in the use of handcuffs, batons, and pepper spray.

Earlier this year, the JCF requested permission for use of other nonlethal weapons such as tasers, but it is unclear whether those appeals have been satisfied.

ALL TALK, NO ACTION

Asked about historical clashes between the security forces and the mentally ill, one policeman said “we’ve been talking about it for ages” but added that their lament has been “seven-day talk”. No substantive action is taken after reports make the rounds in the media, the cop said.

In frustration, the policeman questioned: “We make complaints about it. Nothing gets done about it. Somebody else dies; what are we to do?”

This has resulted in a cycle of deaths among police officers and mentally ill people, he said.

That reality played out in the September 24 slaying of Constable Paul Gordon, allegedly by a man of unsound mind, in Linstead, St Catherine. The suspected attacker was later shot dead by the police.

And last weekend, a homeless man was beheaded by a mentally ill man, who was fatally shot when he challenged the police.

Sharing his personal experience, a cop revealed that dealing with enraged mentally ill people is so difficult that he would prefer to be deployed to firefights.

“When I’m at work, I prefer to hear them send me on an assignment where they are saying gunmen or gunshot a fire ... but if you tell me say is a mentally ill person, trust me, I don’t like it,” he said.

“It’s like me nuh in control of wah guh happen, and me nuh really wah end up shoot him.”

Declining to comment on whether cops have received sufficient specialised training to engage with the mentally ill, Corporal Rohan James, chairman of the Jamaica Police Federation, told The Gleaner on Monday that the Government should further equip emergency healthcare workers to deal with such situations.

“I believe that the time has come for emergency medical technicians to be trained [and] deployed ... to be made available to the general public for appropriate response to the situation,” said James.

Cops say they have no choice but to use lethal weapons because of the unpredictable rage unleashed by some attackers. With a sometimes small window of time to react, several policemen have been injured in clashes by machete-wielding assailants.

Security personnel are imploring the Government to use the police as a secondary contact option.

Despite mental-health professionals being tasked with attending to reports, policemen have complained that those auxiliary services, under the Ministry of Health and Wellness, have not been effective or reliable, the police say.

“If you call the mental health [team], 90 per cent of the time they are going to tell you that they don’t have a unit and that you should call the police,” a cop remarked.

“The mental-health thing is like a different ball game ... . Certain things, you definitely need a professional who is trained to deal with that particular situation ... . I think it’s unfair; it’s like police is everything,” said a cop.