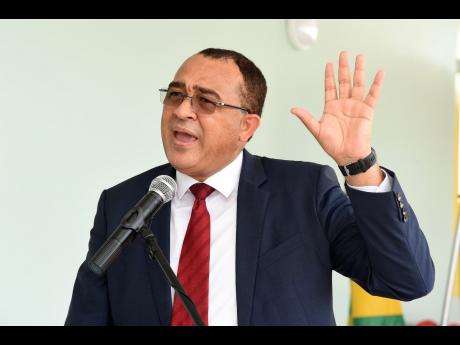 The minister of health and wellness has prohibited donations of any kind from any tobacco- or alcohol-producing company or their subsidiaries. This is after alcohol producers have contributed over $300 million to the country's COVID-19 efforts.

AFTER PUMPING more than $300 million in cash and kind into the Jamaica’s COVID-19 response effort, alcohol producers here have become the pariahs of the health sector.

Their fate was decided by Minister of Health and Wellness Dr Christopher Tufton, who has prohibited all agencies, officials or employees of the ministry from accepting donations, sponsorship, gifts, services or assistance in cash or kind from tobacco-or alcohol-producing companies or their subsidiaries with immediate effect.

The instructions were outlined in a memo on Monday, October 11, which noted that the World Health Organisation (WHO) supported the recommendation.

“Jamaica as a signatory to the WHO Framework Convention on Tobacco Control agreed to the implementation of key provisions under this global treaty, which includes, among other things, a comprehensive ban on tobacco advertising, sponsorship and promotion,” read a section of the memo.

“Our draft Harmful Use of Alcohol Policy, which was approved by the Human Resources Committee of Cabinet in June this year, speaks to a policy objective to reduce alcohol advertising by preventing and/or reducing promotions, sponsorship and any advertising targeting youth. The Draft Alcohol Policy will be amended to include prevention of donations to government institutions, officials or employees,” it continued.

“Therefore, as a policy of the Ministry of Health and Wellness, it is unacceptable for any agency, official or employee of the ministry to accept any donations, sponsorship, gifts, services or assistance in cash or kind from tobacco or alcohol-producing companies or their subsidiaries.”

The memo comes six days after J. Wray & Nephew announced a major donation aimed at assisting hospitals which have appealed to the private sector for help. The company donated $45 million in products to 12 healthcare institutions across the island.

Some $5 million was gifted to the problemplagued Cornwall Regional Hospital (CRH) in Montego Bay, St James, with other donations of $3 million made to the Type B hospital in Savanna-la-Mar, Westmoreland and $4 million each to the St Ann’s Bay and Mandeville regional hospitals.

Each hospital was expected to access their allocated funding in the form of supplies from approved local medical supplier Scientific and Medical Suppliers.

One paediatric consultant at St Ann’s Bay Hospital was quoted as saying there was need for the procurement of additional paediatric warmers and ECG machines, among other equipment.

However, Tufton has described this type of corporate social responsibility as being ultimately aimed at promotion and increased consumption of such companies’ products, which he said have very negative health consequences.

Shocked by the contents of the memo, Gentles argued that at the start of the pandemic, J. Wray & Nephew donated 100,000 litres of pure alcohol, a third of which went to the National Health Fund (NHF) to be used as sanitisers in hospitals and clinics, forgoing revenue for the cause. That donation was valued at $250 million.

“In the early part of the pandemic, there was an immediate overwhelming need for hand sanitiser and there was insufficient in the country because the entire world needed them at the same time,” he said.

Overall, Gentles noted, the alcohol sector has been very supportive of efforts to have the country overcome COVID-19.

The minister’s directive has, therefore, been disappointing, he added, noting that the companies have meant well for the country, in terms of their contribution to the health sector.

He pointed out that the sector had also stepped in when the Private Sector Organisation of Jamaica (PSOJ) needed support in its vaccine initiative, donating $5 million to that project which the Ministry of Health asked the PSOJ to coordinate.

Gentles considers it insulting for the ministry to group the sector with the tobacco industry as well.

“We’d like to believe that there is no safe level of tobacco consumption, but we believe that there are several studies which show that a moderate level of alcohol consumption can actually contribute to better health,” he argued, referencing many octogenarians and centenarians who take a drink every weekend and are able to walk to their farms every day.

The future is, however, not looking bright for the sector as Tufton has also said that the draft alcohol policy, which was approved by the Human Resources Committee of Cabinet in June, will be amended to include prevention of donations to government institutions, officials or employees.

The ministry is taking its lead from the WHO and the Pan American Health Organization (PAHO), which have been playing an integral role in the COVID-19 fight.

According the ministry, tobacco and alcohol are risk factors for noncommunicable diseases, which are the leading cause of death in Jamaica.

But a recent White Paper produced by the Jamaica Beer, Wine and Spirits Network, which analysed the Americas Region on several key metrics for alcohol consumption and harm has presented a generally positive picture that across this region alcohol harm is on a downward trend.

The available data from the WHO 2018 global status report on alcohol and health demonstrates consistent gradual declines in the harmful use of alcohol in Jamaica. Alcohol per-capita consumption in litres of pure alcohol (15+ population) is below the WHO Americas regional averages.

The total alcohol per-capita consumption in litres of pure alcohol in Jamaica is 4.2 compared to an average of 13.3 across the Americas. The study further demonstrates that Jamaica has fewer citizens engaging in heavy episodic drinking when compared with other neighbouring countries in the region.

Tufton’s directive also casts doubt on a campaign J. Wray & Nephew was set to kick-start next week to reward 434 front-line workers with a total of $21.7 million in cash.

It is not clear how the decision will affect the sector’s contribution to other national efforts such as the micro-agro processing facility being built by Wray & Nephew at the Sydney Pagon STEM Academy in St. Elizabeth. The rum company is spending $35 million on this project and is one of the largest and longest contributors of Crime Stop, to which they have committed $1.4 million for the next three years.

One of the biggest scholarship providers in the country, the organisation also partners in the training of bartenders for the tourism sector; just partnered with the Government in the Responsible Drinking Campaign; sponsors the food stalls at Border, St Elizabeth; and funded the refurbishing of the Middlesex School, one of the 35 Early Childhood Commission institutions in central Jamaica.

In the meantime, Tufton has launched a $250,000 cash prize ‘Vax and Win’ promotion with lottery operators Supreme Ventures.