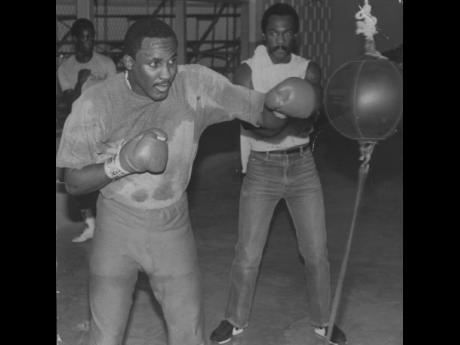 Mike McCallum is the first Jamaican to secure a world boxing title. He defeated Sean Mannion in a 15-round match. The prime minister, Edward Seaga, said that he was very happy with the victory and that it will be an inspiration to other boxers.

THE NEW junior middleweight champion of the world  is Jamaica's Mike McCallum.  The Jamaican won the World Boxing Council(WBC) version of the title last night on a unanimous decision at Madison Square Gardens in New York.

McCallum, in defeating Sean Mannion in the 15-round bout, became the first Jamaican to win a world title.  McCallum succeeded where his countrymen Bunny Grant, Percy Hayles and Trevor Berbick had previously failed.

Going into the fight with a 21-win-no-loss record, the 26-year-old McCallum, who was the number one contender for the better part of a year, had only got his chance when Roberto Duran vacated the title to move up a weight division to fight Marvin Hagler earlier this year. He won the fight in style, according to reports at press time.  Mannion's eyes were cut and swollen at the end of the fight.

This victory takes McCallum's professional record to 22 wins with 19 knockouts.

After the fight, former welterweight champion Sugar Ray Leonard said much more will be heard from McCallum, whom he said displayed skill and control in achieving his impressive victory.

The immediate reaction to the historic victory came from Prime Minister Edward Seaga and the president of the People's National Party, both of whom sent congratulatory messages to the new champion.

SEAGA: ALL JAMAICA IS PROUD OF YOU

“All Jamaica is proud of your wonderful achievement in winning the World Boxing Association (WBC) junior middleweight world title tonight.

“I took note of your statement that you wanted to win the title for Jamaica.  We know that with this success, you have realised your goal through hard work and dedication.

“I am personally very happy with your victory, and I am sure that it will be an inspiration to other young and aspiring boxers.

“Please accept my best wishes for your continued success."