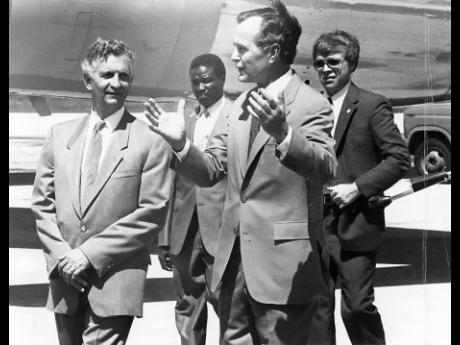 United States Vice-President George Bush (right, gesturing) with Prime Minister Edward Seaga when he was met at planeside of Air Force One, the presidential jet, at Donald Sangster International Airport on October 16, 1983. Mr Bush, accompanied by his wife, are on the island on a three-day official visit during which he will have talks with the Government and the Opposition on matters of mutual interest to Jamaica and the United States, before leaving Tuesday for Puerto Rico on another official engagement. Security officers are behind Mr Bush and Mr Seaga.

Speaking at his reception, VP Bush spoke extensively about his admiration for the Jamaican people and their commitment to democratic traditions. Prime Minister Edward Seaga welcomed Mr Bush, commenting on Bush's support of civil rights in his own country.

VICE-PRESIDENT OF THE UNITED STATES, MR GEORGE BUSH, on his first official visit to Jamaica, has noted that the (Jamaican) people “have been steadfast in your commitment to democratic traditions, free elections, representative institutions, and a solidly established two-party system”.

Speaking at a reception minutes after Air Force One, the official presidential jet touched down at the Sangster International Airport, Montego Bay, at 1:24 yesterday afternoon, Vice-President Bush said: “U.S.-Jamaican relations are very close, stemming as they do from long-standing cultural and commercial ties and, even more important, from a shared commitment to democracy and economic freedom.”

He said he was looking forward during his three-day official visit to his talks with the Governor-General Sir Florizel Glasspole; Prime Minister Edward Seaga; leaders of the Opposition and other prominent Jamaicans to discuss issues of mutual concern. “I'm confident these discussions will strengthen our relations even further,” said Mr Bush.

He said earlier that his wife and he were delighted to have had the opportunity to visit the island, noting that “the warmth of your climate, hospitality and friendship are all very well known in the United States”.

Vice-President Bush said Jamaicans were graced not only with a land of great beauty, “but with a thriving democracy that serves as an inspiration to all in the Caribbean”.

Noting Jamaica's celebrations of its 21st-anniversary of Independence, Mr Bush said: “Like all people, Jamaicans have known difficult times. But your indomitable spirit has enabled you to overcome difficulties and go on to strengthen your democracy and improve your standard of living. We in the United States applaud you.”

And, in his welcome to the U.S. vice president, Prime Minister Edward Seaga commented on Mr Bush's tireless support of civil rights in his own country.

In regard to the vice president's address to Parliament on Tuesday, Prime Minister Seaga said: “We will have another opportunity to express, in a gesture jointly engaged, our countries commitment to the basic principles which he at the heart of human freedom.”

Mr Seaga said the relationship between Jamaica and the United States was founded “on mutuality of values and interest which go much deeper than any political consideration. Our people both respect, in a fundamental sense, the individual's right to freedom – to choose whom he would be governed by, to practice his beliefs, to strive for a better life”.

According to Mr Seaga, “It is always good to share with true friends the times that are special, and your country has proven itself to be a true friend of Jamaica acting with generosity and with responsiveness to our development needs and working to shape policies which offer new opportunities for us, and other countries like ourselves, to achieve stable economies, and thereby a better life for our people.”

Vice-President Bush was met at the airport by a party of US and Jamaican officials. Among them were the U.S. Ambassador,  William Hewitt and Mrs Hewitt; the Vice President's Chief of Staff Admiral Daniel, and Phillip Hughes.

The Opposition was represented by Spokesman on Finance Seymour Mullings; Senator Clive Dobson, and former minister of the public Service,  Howard Cooke.

Mr Bush was also introduced to other members of parliament, the custodes from the County of Cornwall, as well the layors in that region.