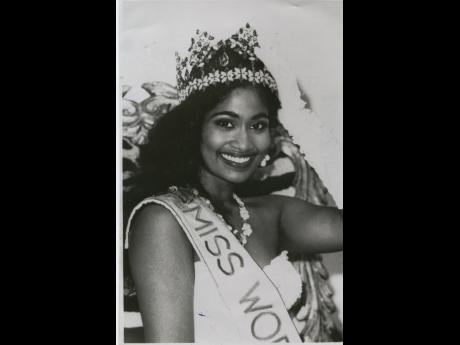 Lisa Hanna came out on top out of 80 women in the Miss World competition held in Africa. The 18-year-old, who was accompanied by her mother, won the hearts of the eight judges and became the third Jamaican to win the title.

IT'S JAMAICA'S, 18-year-old Lisa Hanna, on Saturday, November 27,  topped a field of 80 competitors from across the globe to win the Miss World 1993 title in a singing and dancing extravaganza which impressed the judges in South Africa and set off national rejoicing here.

Lisa charmed the crowd and judges at the South African resort of Sun City with her exuberant personality to win the title previously held by Julia Kurotchinka of Russia.

The 5 foot, 7-inch brown-eyed beauty from St Andrew became the third Jamaican to wear the coveted crown, the first since Cindy Breakespeare took the title in 1976, 17 years ago. Carol Crawford also won in 1963.

Lisa’s win, which carries prizes worth US$185,000, including an Alfa Romeo motor car, was watched by an estimated 1.2 billion broadcast audience around the world. Jamaicans were also glued to their television sets to witness the announcement, made at about 2 p.m., which set off scenes of celebration as congratulatory messages poured into local media houses from all sections of society.

"On behalf of the Government and people of Jamaica and on my own behalf, I extend to you my warmest congratulations on winning the Miss World crown. You have proved once again that Jamaicans are among the best in the world in every field of endeavour."

A statement to Lisa from the Jamaica Labour Party leader Edward Seaga said: "All Jamaica is proud and joins in celebrating with you on your victorious and deserving achievement of the Miss World Beauty Pageant crown. With beauty, intelligence and talent, you have put Jamaica on top of the world."

Lisa’s father, Rene, who watched the contest on television, was ecstatic over the achievements of his youngest child.

"I feel proud for the people of Jamaica," he said. "I also feel proud of the people who helped to make the decision to give her the title. I personally know she is deserving of the title. I am looking forward to her coming home."

Lisa’s mother Shirley accompanied her to the contest in South Africa.

Former beauty queens also joined in the celebrations and offered congratulations. Cindy Breakspeare Tavares-Finson said: "I am over the moon and very happy for her. I am sure she will do a great job for Jamaica."

Barry Wilson, Lisa’s personal fitness trainer at the Spartan Health Club, told The Gleaner that he was very excited, ecstatic and happy.

"She deserves it," he said. ’Look at how she answered her questions. "Her body was well-conditioned."

Kingsley Cooper, executive chairman of the Pulse Investments, the modelling agency which released Lisa from her contract for a year so she could participate in both the Miss Jamaica and Miss World contests, also expressed delight.

"We are definitely thrilled and overjoyed by Lisa’s success," he said.

This story was compiled from local and overseas wire reports.