10- year-old needs $7.8 million for emergency surgery after being shot 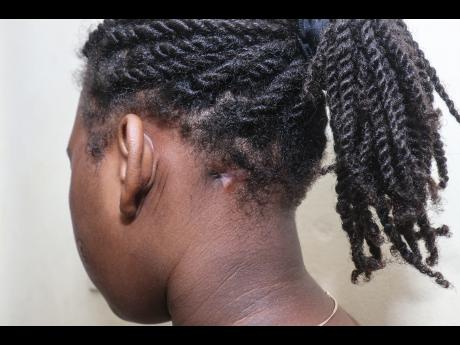 Calyssa Walker desperately needs surgery to restore hearing in her left ear. Walker was shot in a shoot-out during a high-speed chase in Montego Bay. Her mother shared that if the surgery is not done she might even lose hearing in her right ear as well.

‘All I could see was blood running like water’

CALYSSA WALKER, the 10-yearold child who suffered a bullet wound during a major shooting incident in downtown Montego Bay on October 6, is desperately in need of financial help to secure the US$50,000 (J$7.8 million) needed for cochlear implant surgery to correct the damage she sustained.

Calyssa was one of four bystanders shot in an incident in which rifletoting attackers engaged men in another car in a shoot-out during a high-speed chase in the western city.

Her mother, Kelly-Ann Reece, was among those shot in the incident. Three alleged gangsters were killed.

“I thought the experience was a dream,” said Calyssa, who spent a month in hospital recovering. “In the hospital, I closed my eyes and went back to sleep, and when I woke up, I still felt the pain and I could not open my eyes.

“I want the crime to stop, because they are hurting little kids, decent kids who want to live their lives,” said Calyssa, who still suffers bouts of dizziness.

In recounting the tragic event, Reece said that she, Calyssa, and a younger daughter were travelling together in a taxi when the shooting occured in the vicinity of McCatty Street.

“We heard something sounding like shots. I told Calyssa to hold your head down and hold your sister.’Then I felt something slap my ear, and I told the driver I got shot.

“I turned around to look at my child, and all I could see was blood running like water,”said Reece.

“Three times I saw her go cold on them that day. It is a day that will never come out of my head,” said Calyssa’s mother.

While Calyssa was recovering in hospital, the family learned that the

bullet had damaged her left eardrum to the point that only a cochlear implant could restore her hearing. The device, when installed, electrically stimulates the ear’s inner nerve and helps to alleviate hearing loss.

A cochlear implant could cost around US$50,000. And according to Reece, time is running out – fast.

“From what I understand, if this surgery is not done as soon as possible, she can also lose hearing in her right ear. But I am poor, I do not have the money, so I need some form of help, ”said Reece.

Calyssa, who wants to become a doctor, is hopeful that she will get the help needed to finance her surgery, as she has not been able to keep up with online schooling because of side effects from her injuries.

“I hope that people will contribute money for me to get better, so that when I get better, I can go back to classes. ... I am not going to let this stop me from living my dream,” said Calyssa.

Persons who are willing to help Calyssa Walker may donate funds to the Bank of Nova Scotia’s Sam Sharpe Square branch, account number 1006493, or contact her mother, Kelly-Ann Reece, at 876-434-9497.