Man overjoyed after finding his mother after 28 years 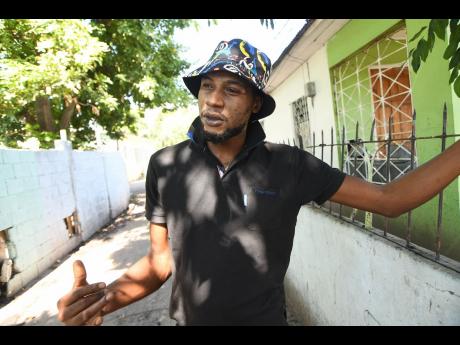 Twenty-eight-year-old Garnet Johnson has found new joy and energy after being reunited with his mom. Johnson was given to the state at seven months but says he is looking past that as he no longer feels alone in the world. He is now looking to find his father who is said to be still living in his birthplace in Manchester.

GARNET JOHNSON, whose board house was crushed by a tree on September 30 and who lamented having spent years in state homes as a child, has finally been reunited with his mother.

Days after The Gleaner shared the 28-yearold man’s story, his mother, who has been living in the vicinity of Spanish Town Road, 2.5 kilometres from where he lived on George’s Close, went in search of him.

She sat waiting patiently at his home until he returned from selling shrimp.

According to Johnson, the moment she disclosed that she was his mother, he was beyond excited.

“She seh me a her son weh she a look for from when, and mi feel her energy right away and thing. She showed me some papers and we connect. A she mi de ‘mongst from then,” he told The Gleaner on Monday.

Johnson said he has overlooked the reasons offered by his mother why she handed him over to the State. Now he’s happy to reconnect with his long lost family.

“Mi try fi love her and thing. Di bond a come on. Mi a feel her spirit little and little. We eat dinner together, ... we pray together, we have fun together,” Johnson said.

“We run we little joke and we reason. Mi question her. She question mi.” Johnson explained.

He said he is grateful that she came forward and he is surprised that they lived so close to each other for years.

Johnson also takes pride in knowing that he is the only son for his mother, who also has daughters.

“Mi never expect that mi woulda have sisters,” he said before smiling and covering his face.

GEARING UP TO MEET HIS FATHER

Johnson is now gearing up to meet his father, who he heard still lives in Chudleigh, Manchester.

Garnet Johnson was born in Chudleigh on April 3, 1993, and was given over at seven months to the Windsor Lodge Children’s Home. He was later transferred to St John’s Bosco Boys’Home.

Upon reaching adulthood, he travelled to Kingston in search of a better life and settled at George’s Close, off Waltham Park Road in St Andrew. He was previously employed by Caribbean Broilers up to 2017 and used funds he saved to build a one-bedroom board house.

Things took a turn for the worse for Johnson, who sells shrimp for a living, when the freak tragedy occurred: a decades-old tree falling on his board house, damaging all his possessions worth approximately J$400,000.

Johnson has no intention of returning to live at the George’s Close property, which was sold by its owner.

He is grateful to persons who reached out to him, on his neighbour’s smartphone, and sent money that allowed him to purchase a new mobile and other items as he seeks to rebuild his life.

“I’m thankful,” said Johnson, disclosing that he was still in need of help.

“All a mi furniture dem damage and di money weh mi spend fi build di board house, it just gone so,” he said.