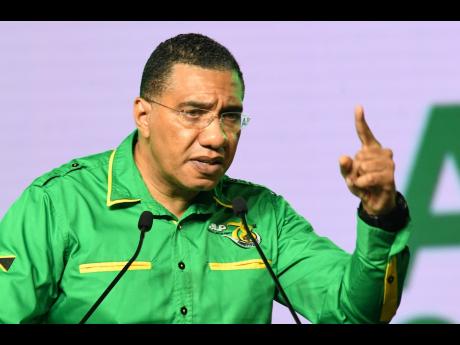 The prime minister shared that he would implement the death penalty as punishment for individuals found with illegal firearms. He further stated that there would be no room for plea bargaining for these individuals. More than 1, 300 persons have been killed since the start of the year.

The thrust follows last Thursday’s blocking of the extension of states of emergency (SOEs) in seven police divisions, delivering a blow to the Holness administration, which has floated the measure as a crime-fighting tool for as long as seven years.

Holness has signalled that the Government will bring the Enhanced Security measures bill, the Bail Act and the Firearms Act to Parliament for reform early next year, indicating that at the heart of the country’s crime problem is the ease of access to unlicensed guns.

Those bits of legislation are expected to restrict this.

Singling out the Firearms Act, the prime minister said that it does not take into account the illegal acquisition of guns.

“The problem that we have in Jamaica is the inflow, a mass unregulated inflow of unregistered light arms and guns from post-war countries and from our big trading partners to the north,” said Holness, the Jamaica Labour Party leader, at the organisation’s 78th annual conference at the National Indoor Sports Centre in Kingston.

Speaking hyperbolically, the prime minister said were it up to him, the death penalty would have been reinstated to deal with those found to be in possession of an illegal firearm.

“For this, I would make an exception. Anyone found with an illegal gun should start with the death penalty,” he said to resounding applause.

“What I’m saying is, there need to be stiffer penalties for those

Holness said, too, that there should be no room for plea bargaining for persons in those categories.

Under the Criminal Justice (Administration) (Amendment) Act, 2015 for non-capital offences, the court may reduce a sentence by up to 50 per cent if the accused indicates on the first relevant opportunity that he or she wishes to plead guilty to the offence.

Holness said that the only route for a possible reduction in sentencing should come with the divulgence of credible information relating to other parties’ involvement in the trafficking of guns.

“I wish it could be that draconian but we will do our best to send a signal that we will not tolerate illegal firearms in this country,” he said.

Amendments are to be made, he also said, to the Corrections Act to target the flow of communication devices into prisons.

Holness said that a significant number of the murders taking place are ordered from behind bars and suggested that a new act would limit this.

He said allocations will be made in next year’s budget for the construction of a high-security prison to block telecommunications.

However, the prime minister did not disclose the number of correctional officers who are prosecuted for contraband-related offences.

In the same breath, he sought to hammer home the Government’s position that SOEs have been impactful in the areas the security measure has been implemented, and criticised the Opposition People’s National Party’s vote against the extension.

The Government needed a twothirds majority vote to get the three-month extension it sought but it failed to get at least one vote from the Opposition benches to pass the measure in the Senate.

“I don’t know of any other free and democratic society that has the murder rate that we have. It is unusual. It is an emergency. I’m sorry that the Opposition does not see it that way,” the JLP leader said.