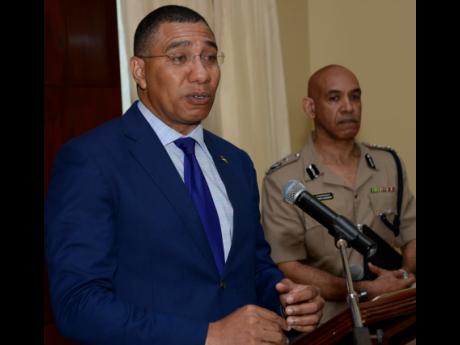 How does the PM appraise the police commissioner?

It has been unclear what system is used to rate the police commissioner. The prime minister has expressed his faith in the top cop but the number of murders and other violent crimes have caused others to question the effectiveness of the JCF led by Major General Antony Anderson.

THE CONTINUING public debate about Jamaica's crime situation eventually comes around to the performance of the Jamaica Constabulary Force (JCF), with scrutiny of its leadership, management and resources. This is understandable because the police are the most recognisable representatives of the overall justice system of the country.

Prime Minister Andrew Holness recently expressed his satisfaction with the performance of the incumbent, Major General Antony Anderson, as he announced the reintroduction of states of emergency in seven areas where crime continued to gallop out of control.

We believe an independent survey of the population may not place Major General Anderson in such a good light, if questions were to follow along these lines. Do you feel safe in your neighbourhood? Is crime going down? Are the police motivated and productive? Are the police winning the war against the criminal gunman?

If the answers to these questions are no, then the prime minister would have a difficult time justifying his confidence in the performance of the commissioner and the JCF. We daresay his assessment can only be based on a gut feeling, for, if the facts are applied and combined with the crime statistics, that confidence would be shattered.

Annual performance appraisals are commonly used in the workplace to hold management and employees accountable against stated objectives. They are designed to provide a summary of the successes and challenges faced by employees.

We do not know to what extent, if any, performance evaluation systems are relied on by the management of the JCF, but there is supporting evidence from various organisations that they provide a basis for fair and impartial measurement of an employee's responsibilities and performance. They are also relied on to provide guidance to offer recommendations for commendation, condemnation and promotion.

Performance management as we understand the concept in relation to, say, the JCF, cannot be merely a once-a-year assessment of performance. Rather, it has to be a continuous effort, daily assessing the community's needs and plotting how to deliver results, based on expectations. The bottom line is that people are looking to the JCF for two key deliverables – a safer environment and reduction in crime. Alas, in both respects, the JCF's performance has been dismal.

From a statistical standpoint, when one considers the State's ongoing war against gangs and gangsters, it is the gangsters that are winning, for they are wellarmed and are able to kill with impunity, at any time and anywhere their targets may be located. Too few of those creating mayhem in society are caught and brought to justice.

We have not seen the contract or job description of the commissioner, but we feel it is high time that such a contract be crafted in a way that a nonperformance clause can easily be triggered when it becomes necessary.

Major General Anderson, who is technically the chief executive officer of the JCF, previously served the Jamaica Defence Force for more than three decades, rising to the top of the organisation. He has served his country well, and became commissioner in 2018. For most of his life, Major General Anderson has been a part of the country's security apparatus.

Aside from the high crime levels, Major General Anderson also has to worry about penetrating the JCF culture, staff numbers and morale, budgets, staff motivation, abuse of authority by his members, corruption, failure to apply the law because of conflict of interest, and a slue of issues which confront him.

But his core job is to deliver a reduction in crime and find ways to create safer communities. That, prime minister, is the real benchmark of whether the commissioner is doing a good job, and such assessment has to be supported by the facts.