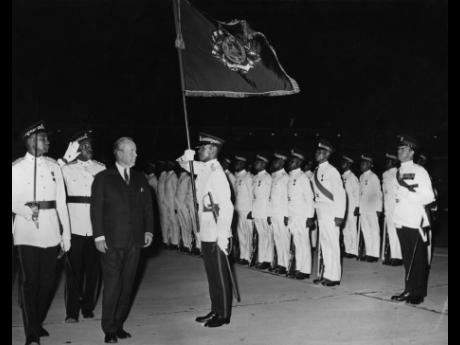 Mr Pearson inspecting the guard of honour of the First Battalion, the Jamaica Regiment, at the Palisadoes Airport. 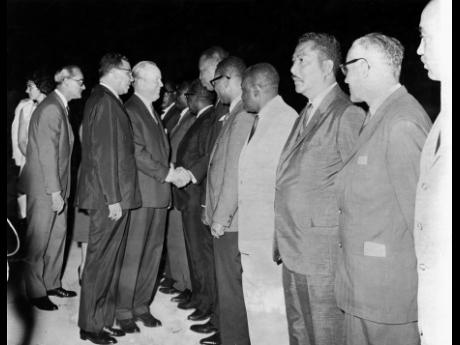 The Rt. Hon Lester B. Pearson, Canadian prime minister, meeting members of the Cabinet on November 28, 1965. Here, he is shaking hands with Senator the Hon Hugh Shearer, leader of the Senate. Beside Mr Pearson is Mr Sangster; behind Mr Sangster is Mr H. Jay, Canadian high commissioner.
1
2

The first Canadian prime minister to visit Jamaica, Lester B. Pearson, was happy to experience the tropical weather having landed on the island in his private jet. Pearson's visit was to have talks with the acting prime minister on issues of mutual interest.

The Rt Hon Lester B. Pearson, the first Canadian prime minister in office to visit Jamaica, arrived here yesterday afternoon from Canada by special flight of the Canadian Transport Ministry.

Pearson, accompanied by his wife and seven members of his staff, said on arrival that he had decided to take a Caribbean holiday after the recent elections in Dominica and had to include Jamaica in an official visit. “We have close ties going back over many years,” he said.

He was met at Palisadoes Airport, where his plane landed a few seconds after 5:30 p.m., by Jamaica’s acting Prime Minister, the Hon Donald Sangster, other members of the Cabinet, and top officers of the Government.

During his stay in Jamaica, Mr Pearson will have discussions with Mr Sangster on matters of mutual interest to Jamaica and Canada. Sugar and Rhodesia are two such subjects. Migration is another.

From Jamaica, Mr Pearson and party will go on a two-week holiday elsewhere in the West Indies and then on to Port-of-Spain, Trinidad & Tobago, for another official visit in this region. He will have discussions also with the prime minister of Trinidad & Tobago, the Rt Hon Dr Eric Williams. Mr Pearson leaves here on Tuesday morning for a small island near St Martin in the Leeward Islands.

The plane on which Mr Pearson arrived yesterday was one of the smallest jets ever to land at Palisadoes. It touched down in the grey twilight and Mr Pearson was met on board by the Canadian high commissioner and at the steps of the aircraft by the acting prime minister.

A guard of honour of the First Battalion, the Jamaica Regiment, was on hand and was inspected by the Canadian prime minister. The Jamaica Defence Force Band was resplendent in red and black, in contrast to the white dress uniforms of Canada.

After inspection of the guard of honour, members of the Jamaican Cabinet, their wives, and top officers of Government were introduced to Mr Pearson.

Afterwards, an official greeting on behalf of Jamaica was extended by the acting prime minister in the VIP Lounge at Palisadoes, and both Mr Pearson and Mrs Pearson replied:

This is what Mr Sangster said:

"Prime Minister, we are very glad to welcome you to Jamaica and to have you here. I have known you from the days when you were with the United Nations and displayed great interest to humanity and in the world.

And, in later days, I have known you as prime minister of Canada, doing a magnificent job for your country and taking great interest in international affairs.

"There has been a long and close association between your country and my country in trade and industry, in banking, insurance and in many other ways, and particularly in the goodwill and the good relations that exist between those Canadians who come down here to visit with us and the Jamaicans who have found, in many cases, homes in your country. Those associations have been long and dear to us and we hope they will not only continue but also improve.

"I would like to take the opportunity publicly to say a word of thanks to you and to your Government for all the technical aid and the financial assistance that your country has been giving to my country and, in addition, to those Canadians who have come down here in your volunteer service and in many other fields to help us with our development in one way or another.

"We do appreciate it and we want you to know it; and we would like you to take back that message to the Canadian Government.

"I’m very happy that you have found it possible to come here and spend a very short while with us so that we can have the opportunity of exchanging some views with you on the world situation and on matters of particular interest to our two countries.

"So, on behalf of the people of Jamaica, I extend a very hearty welcome to you. Our only regret is that your stay is going to be so short, but we hope that you will so enjoy yourself and so feel at home that when you leave you will want to come back as quickly as possible, for as long as possible. We welcome you.

"Acting Prime Minister, on behalf of my wife and the members of our party, thank you, Sir, for your very kind and very warm welcome to Jamaica.

"But I think this is the first time that a Canadian prime minister has paid an official visit to Jamaica, and I am glad that I am the first. I am sure I won't be the last.

It was a great pleasure for me and a great honour for me to convey to you, Sir, the warm greetings and the best wishes of the people of Canada to the people of this country, to your prime minister, whose services to Jamaica for so many years we know and acknowledge; to the members of your Government whom I have had the pleasure of meeting a few moments ago; and to yourself as acting prime minister.

"You mentioned, Mr Sangster, I think, three categories in which we have established relationships, and you forgot a very important fourth – the relationship of personal friendship.

"I know we are going to have useful and interesting talks together. I am sure we will be talking about trade and development problems and, indeed, anything else that either of us might wish to bring up, We are, Jamaica and Canada, members of the Commonwealth, free and independent nations.

"We share, our two countries, the belief that countries can work together in friendship and cooperation, irrespective of their racial or other origins, inside an association such as the Commonwealth.

"And we know that that concept, the importance of which we acknowledge, is endangered in certain parts of the world today. I have no doubt we may wish to talk about that.

"In any event, I assure you that we are delighted to be here.

"Our countries share a good many things, but climate at this time of the year is not one of them.

"So our happiness at being in Jamaica is increased by arriving in this warm and hospitable land, having left only four and half hours ago the wintry winds of the northern part of North America.

"The warmth of your climate is only excelled by the warmth of your welcome. Again, I express our gratitude, my wife's and my own and the members of our party to you, Sir, for this wonderful reception which we shall all remember and which will be an encouragement to us to come back. Thank you."

Invited by Mr Sangster to say a few words, Mrs Pearson, who wore an elegant suit of violet knitted brocade, expressed thanks for the welcome accorded them. She said it was good to get away from the snow and ice.

The Canadian prime minister and Mrs Pearson then left Palisadoes Airport in the acting prime minister's car for the Sheraton-Kingston Hotel where they are staying. Normally, they would have stayed at Vale Royal, but the size of the party which Mr Pearson brought with him precluded this since he wanted to stay with his party.

Last night, the Pearsons and some members of their party were guests at Vale Royal at a dinner given by the acting prime minister.

The governor-general was represented by Major Trevor Robinson, ADC.

Mr Pearson will have talks this morning with Mr Sangster, either at Vale Royal or at the prime minister's East Race Course office. He will afterwards make a courtesy call on the governor-general at King's House, then tour The University of the West Indies and Hope Botanical Gardens with the chief of protocol.

At 1 p.m., he will lunch with Mr Sangster and the Cabinet at Vale Royal. At the same time Mrs Gyles, wife of the Hon John Gyles, minister of agriculture and lands (now in New Zealand), will be hostess to Mrs Pearson, wives of ministers and other persons in the Jamaican society at the Terra Nova Hotel.

In the afternoon, Mr Pearson will meet the Leader of the Opposition, Mr Norman Manley, QC, at the PNP's South Camp Road offices, and later continue discussions with Mr Sangster at Vale Royal.

Tomorrow morning, Mr Pearson will give a press conference in the ballroom of the Sheraton Hotel before departing for Palisadoes Airport and the Eastern Caribbean.

Mr Pearson, who is 68, was first a university lecturer and professor and then a politician.

He was 1st secretary in the Department of External Affairs, Canada from 1928 to 1935, and, after a stint at the Canadian High Commissioner's Office in London, became under-secretary of state for external affairs, in Ottawa, in 1941 to 1942.

He then moved to Washington as minister-counsellor in the Canadian Embassy, then returned to the External Affairs Ministry, first as under-secretary, then (on election to Parliament) as secretary of state. On leaving that office, he was leader of the Opposition (Liberal) in the Canadian Parliament until 1963 when he succeeded Mr Diefen Baker as prime minister.

He has been a Liberal MP for Ontario since 1948, the year he became secretary of state for external affairs. He has represented Canada in a number of committees and conferences both before and since becoming prime minister and was chairman of the North Atlantic Council from 1951 to 1952.

He holds a number of degrees from several universities and colleges and won the Nobel Peace Prize in 1957. His publications are Democracy in World Politics, in 1955, and Diplomacy in the Nuclear Age, in 1959.