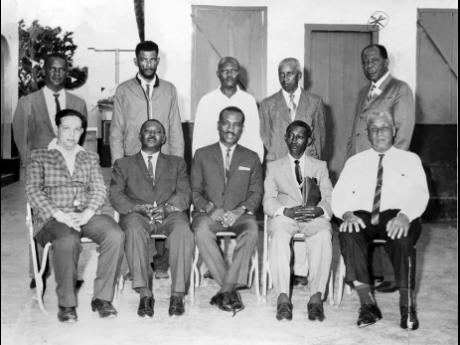 A third force in Jamaican politics has been launched. the new party is a combination of splinter groups. The first meeting dealt with the party's constitution and the selection of officers

What has been described as "a third force" in Jamaican politics, was launched on December 4, 1966 when 12 "splinter' political groups came together in a single organiation which has been dubbed The Jamaica United Party. The "amalgamation" took place at a meeting at the Jamaica Success Club, Wildman Street, Kingston.

Provisional president-general of the organisation is Mr Marcus A. Hamilton, councillor of the former Andrew Corporation Council who represented the People's National Party on that body. Mr Hamilton presided at the December 4, 1966 meeting.

Ten other officers and 25 members were elected provisionally to serve until January 29, when the first annual conference of the party is held. At that conference, a general election of officers will take place.

During the meeting, there was much debate and discussions firstly. On the organisation's draft constitution, then on the selection of officers and members who are to serve and finally on the name by which the organisation should be called. At one stage during the discussion of a likely name for the new party, several members walked out in protest.

The draft constitution was adopted. Principal speakers at the meeting were Messrs David E. Foot, Artis Z. Chambers and Hamilton, the convenors. Members also spoke from the floor.