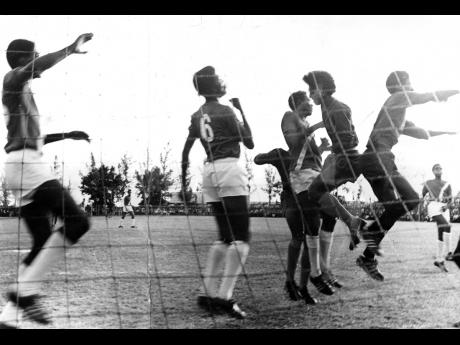 Kingston college custodian Donovan Haynes (right) punches away a floater in the nick of time to beat the advancing head of Vere's Larry Walcott (second from right) in one of the many attacks launched by Vere in the second leg of the Olivier Shield game at Hayes on Saturday December 5, 1970. Giving protection to the goal are KC's Trevor Campbell (No. 6) and Patrick Vernon. Vere won 2-0 to retain the shield on a 2-1 goal aggregate.

The Vere football team was a force to be reckoned with in their match against Kingston College. The boys fought for every ball and pressured the line of defence on the opposing team.

VERE TECHNICAL HIGH- SCHOOL, wasting no time in ruling their own roost, neutralised Kingston College's first lead with a 55th-second goal, struck them with another two minutes from time and so  retained the OIivier Shield on a 2-1 goal aggregate, amid jubilation at Hayes, Clarendon, on December 5, 1970.

Vere won 2-0 but three more goals would have reflected their command much better – so much did they stretch the Kingston College defence thin and to an extent that had never before been the misfortune of the North Street boys for the entire season.

Once the Vere machine clicked into operation, the outcome of the issue was predictable.

Fighting for every ball, attacking their rivals at varying paces and from different angles.

Vere left KC in a whim, the latter was unable to match their slickness. Douglas getting his colleagues to revolve around him was an authority here as his school etched their name on the symbol of local secondary schoolboys football supremacy for the third successive year.

Pepped up by the return of goal-getter Anthony Douglas, Vere were so immeasurably superior that the KC “guns”, Derrick Denniser and Howard Bell, never “barked” at all. With skipper Errol Barrett the hub of the whole wheel, Vere attacks continuously sent KC scurrying into quick defence.

But they were not fast enough in the 53rd second when Douglas sent a decisive forward pass to his left-winger, Errol Walker and darted to the centre. Walker using some fancy footwork, swept by the KC right-back Dawkins, touched the ball to inside left Larry Walcott who touched it back for him to sweep it into the middle for Miquel Blair to tap it in.

From there on KC were forced to deal with the mobile Walcott in midfield, the dangerous thrusts of Barrett, Trevor, Dennis and Blair, and the explosive shooting of Douglas.

Luckily, they did not concede further goals, such as when Walcott broke through with their defence in ruin, but shot hurriedly and lost the chance; and in the dying stages of this first half when the ball was zipped from opposite wings by the goal-hungry forwards.

The only time KC looked threatening up to then was at two minutes when Robert Smith beat a queue of tackles and shunted to Bell who shot feebly into the hands of the goalkeeper, Orville Edwards. The quick-moving Vere defence, under the command of centre-half Errol McBean, never followed any room or time for KC to plot any more serious moves.

There, only Patrick Vernon offered anything that looked capable of averting a Vere goal rush.

Indeed, when he was beaten it was the poor finishing or wayward shooting by the Vere forwards that denied the goal that would have clinched the Shield.

Several times did Douglas miss from point-blank range and it looked as though that goal would never come. Two minutes were remaining and KC had already missed several half chances when Vere started the offensive that was to plunge KC into total despair.

Walcott won possession on the left, stabbed the ball to Walker who gave it to Douglas. He delicately chipped it to Dennis and as the KC defenders scurried about in confusion, Miquel Blair drove home goal No. 2 that brought the fences, mobbing the Vere players in acclaim of their retention of the Shield.