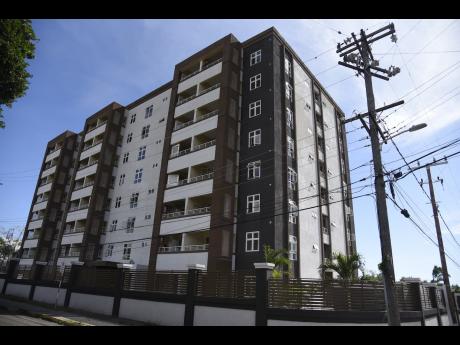 The location and cost of the lands on which the Ruthven apartments were built should be considered when talking about the price of the units. The 86 Ruthven Towers units sit on five acres of prime land in New Kingston, costing $378.5 million.

“PUBLIC DISTRACTION”– according to Prime Minister Andrew Holness – over the high-end Ruthven Towers apartment complex in New Kingston has forced the Government to put on hold a planned Phase Two of the National Housing Trust (NHT) development.

Critics had lashed the NHT over the high price for the units, which ranged between $27.7 million and $37.7 million, charging that the state agency had strayed from its mandate to provide affordable housing. The entity, however, defended the prices, saying that they were a reflection of skyrocketing construction costs, its location, and access to amenities.

Admitting that the outrage had placed plans for further development on hold, Prime Minister Andrew Holness yesterday argued that, after more than 40 years of existence, institutions such as the NHT were in need of a review to ensure their original missions are still relevant today.

He said that, with that review now complete, the NHT was now even more closely aligned to its original mandate, adding that it was the criticism which has been misplaced, noting that the public outrage had irked him personally.

“We see the misalignment of vision and reality in the public commentary on the decisions and actions of the NHT, so it kinda rubs me the wrong way as well, when I hear the blanket criticisms without context, of what the NHT is doing, as if to say the construction of one development on Ruthven Road somehow immediately destroys and deprives everyone else of housing, ... as if to say the people who will benefit from Ruthven Road are not contributors as well,” Holness said while delivering the keynote address at the handover ceremony of houses at Twickenham Glades in St Catherine.

He said that the Government had instructed the NHT to re-evaluate its participation in what he referred to as the Ruthven Road segment of the market, admitting that it is going to be a difficult decision as to whether it should move ahead with any such further development at all.

Consequently, he has instructed the entity to put Phase Two of the project on hold and determine whether it should proceed “based upon the construction cost and the cost of the land and the public distraction”.

Despite the firestorm over the prices, all 86 units have already been sold and the successful applicants will be announced shortly.

“The commitment for Ruthven Road was made before my time, by a former prime minister, and it is a commitment that I agree with; I believe it should be done. So it’s either we leave it or we get it done. The direction was ‘Get it done’,” Holness said. “If we didn’t do it, then maybe we wouldn’t have anything to argue about and 86 people would not be housing beneficiaries today. Who knows? Probably the land would be sitting down there, waiting to be developed.”

He added: “I say this to say that the NHT still has a duty to provide housing solutions and opportunities for every category, every segment of the market, and you have to look at this segment relative to its distribution of its portfolio right across.”

The 86 Ruthven Towers units sit on five acres of prime land in New Kingston, costing $378.5 million. In comparison, the Twickenham Glades housing scheme was built on 12.2 acres on land acquired for $37 million and on which 110 two-bedroom duplex units were built. The size of the units in the latter is 780 square feet and each sits on regular-size lots of between 3,035 and 3,529 square feet. Premium-size lots range from 4,133 to 5,511 square ft.