Talks in gear for Jamaica to become a republic 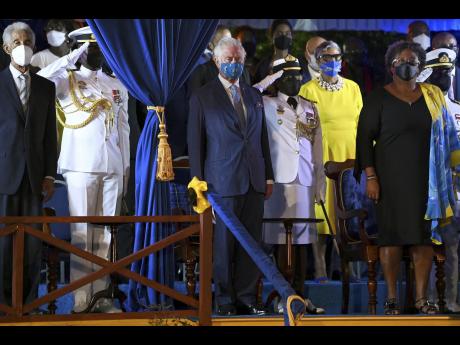 Barbados has removed Queen Elizabeth II as head of state, replacing her with President Sandra Mason.

Fitz Jackson in Parliament last Tuesday raised the point that talks of Jamaica becoming a republic started as early as the 1990s. There has been a lot of chatter about removing the Queen as head of state since our Caribbean neighbour Barbados became a republic after its announcement last September.

HOURS AFTER Eastern Caribbean neighbours Barbados declared republic status and swore in its first president, a veteran politician has criticised Jamaican lawmakers’ inertia in severing the country’s links to the British monarchy.

Fitz Jackson, member of parliament for St Catherine Southern, raised concern during Tuesday’s sitting of the House of Representatives that there has been silence on a resolution tabled in December 2020 to end Jamaica’s political and titular links to the British that date back to colonial slavery. The resolution was proposed by Opposition MP for Manchester North Western, Mikael Phillips.

Jackson pointed to provisions within the Constitution that allow for the necessary steps to be taken ahead of the country’s 60th celebration of Independence next August.

He described Jamaica’s continued ties to the

“We are now approaching 60 years and are still lacking in the courage to do what they have done. I believe it’s high time. Let us use this turning point for our sister nation as a catalyst to formally shed ourselves of that vestige of colonialism,” Jackson said to muted applause from colleagues.

Jackson said while much discussion on the issue has taken place from as far back as the 1990s, Jamaica remained shackled to its former colonisers.

Barbados’ cutting of ties with the British monarchy at midnight on Monday was the consummation of an announcement by Prime Minister Mia Amor Mottley last September, ending a colonial relationship that has lasted nearly 400 years.

The island, with a population of approximately 300,000, has removed Queen Elizabeth II as head of state, replacing her with President Sandra Mason.

Acting House Leader, Culture Minister Olivia Grange, who noted that the motion was important, said that the muchdiscussed issue of sovereignty was being actively considered and that an appropriate response would be provided in short order.

Not satisfied, Jackson pressed for a definitive time, arguing that the motion had been languishing for too long.

“I just have to indicate to you that you will get a response soonest. That’s as much as I can say at this time, but we consider the matter important and Parliament will be looking at this motion, or the subject itself, at the earliest possible time,” Grange responded.

Phillips had suggested that a referendum on removing The Queen as head of state be linked with the local government elections due by February.

He proposed the appointment of a committee of appropriate professionals who would embark on a six-month public education exercise on the desirability of Jamaica changing to a republic ahead of the vote.

Both the Jamaica Labour Party and the People’s National Party have repeatedly promised to actively pursue replacing The Queen as head of state.

In 2012, then Prime Minister Portia Simpson Miller, in her inaugural address, said that the time had come to make the island a republic.

Ahead of the country’s 50th anniversary celebrations, Simpson Miller had said replacing The Queen would “complete the circle of Independence”.

In his Throne Speech in 2016, Governor General Sir Patrick Allen had announced that the Andrew Holness administration would be seeking bipartisan support for proposed legislation to replace The Queen with a non-executive president as head of state.