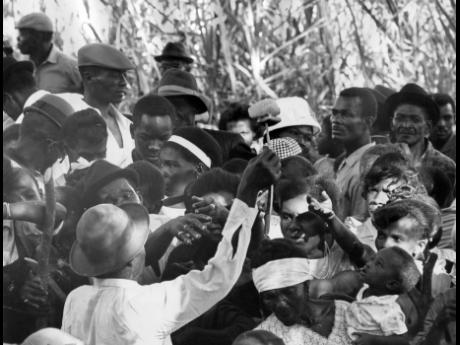 It's feasting time at Accompong and eager hands stretch out to grasp the preferred food. The happy people throng around the wire enclosure in which the food was cooked (without salt) and served. A baby in the forefront rests on the arm of an old Maroon woman and looks aloft at the food. 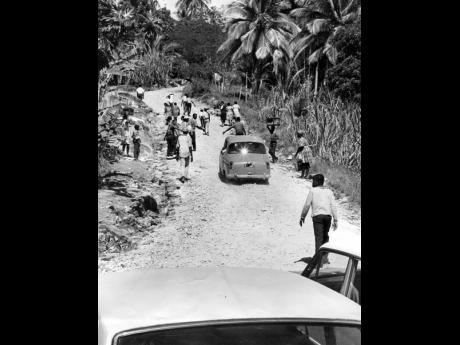 Visitors to Accompong labour up the steep hill leading to the Maroon Village on Monday, January 8, 1968 to join with the first free slaves in celebrating the 231st anniversary of the peace treaty with Britain. 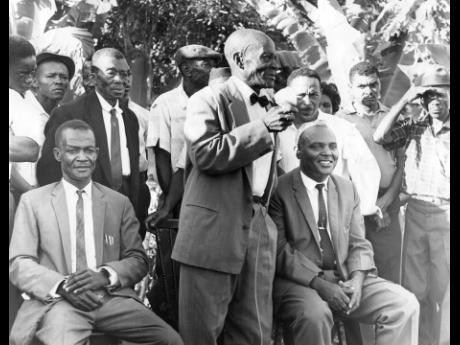 Ex-Colonel of the Accompong Maroons, Mr J.W. Robertson, relates some of the great deeds of Maroon Chief Cudjoe who led the revolt against the British in the eighteenth century at the official opening ceremony of the annual celebrations. Others from left are Colonel M.L. Wright, Major Arnold Anderson and Mr Sydney Pagon, MP for South-East St Elizabeth. 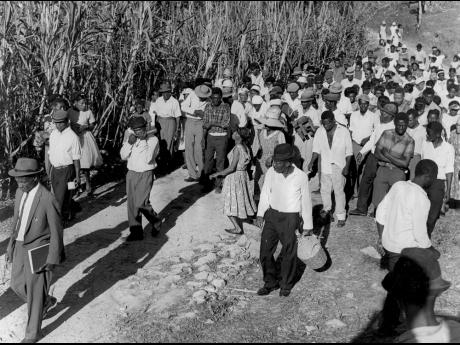 Colonel M. L. Wright marches in front of the procession leading from the sacred spot called Guinea Grass where the feasting has just ended, back to the centre of the village. Behind the Colonel the "abeng", which once signalled the approach of British forces, is blown by a bugler while dancers of the "myal" follow. The man at centre is playing an instrument called the "gumbe". 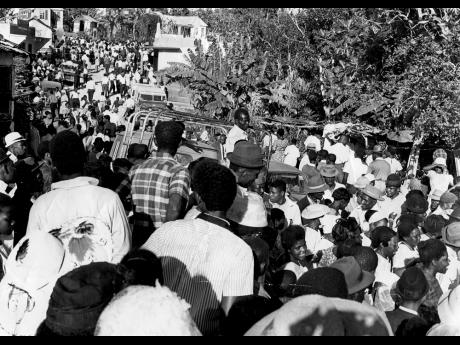 Hundreds of happy people can be seen in the main street of Accompong as they joined with the Maroons in celebrating the anniversary of their peace treaty with the British. At the extreme right a group of frenzied "myal" dancers can be seen chanting the traditional "gumbe" songs as they go through the motions of the "myal".
1
2
3
4
5

THE MAROONS of Accompong celebrated the 231st anniversary of their treaty with the British January 8 with the ancient on music of the "gumbe" and the famed "Abeng" which once rang out through the hills warning the warriors of the approach of British forces.

From Sunday night preparations started for the celebrations, and pigs and chickens were cooked early on Monday morning at a spot called Guinea Grass, about a mile from the historic cave where Maroon Chief Cudjoe made peace with the English in 1737.

At Guinea Grass a band of three musicians playing two hand drums and a "gumbe" (a square topped bonho drum standing on our feet) kept up a steady tempo from early morning while the women danced the traditional "myal" dance.

A little after midday the sound of the abeng rang out in the cavernous hills and a procession of frenzied dancers, led by the abeng bugler, stumbled into the clearing of Guinea Grass from the surrounding bushes. They had come from the spot where Cudjoe's house once stood.

Menu – Boiled pork, chicken. The Maroons then feasted. The roasted and boiled yam, and roasted plantain, all cooked without salt.

The function was presided over by Colonel Wright and short addresses were given by ex-Colonel J. W. Robertson, Major Arnold Anderson, and Mr Joseph Salmon, secretary of the Maroon Council.

The present Chief of Colonel of the Accompong Maroons is Mr Martell L. Wright, a 50-year-old grocer and farmer, who was elected to the post in November of last year and who will rule for the next five years when new elections are scheduled.