Poitier promises to come back to Jamaica 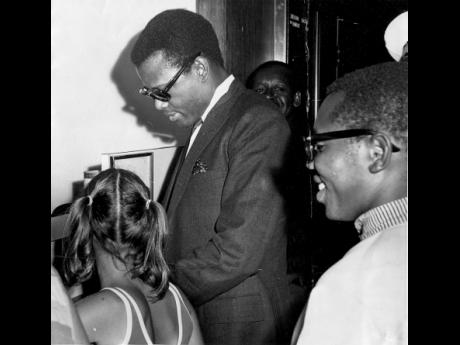 Actor Sidney Poitier signs an autograph for an eager fan at the Sheraton-Kingston Hotel whilst he was on a short visit to Jamaica in January 1968.

Popular actor Sidney Poitier visited Jamaica for a little under 24 hours. He came to get his nephew settled in a school in Mandeville. The actor shared that while he did not get a chance to explore the island, he loved what he saw and said he would be back.

American actor Sidney Poitier paid a flying visit to Jamaica on Friday night and returned to the U.S. yesterday.

“I intend returning to Jamaica in the near future and then I will have a lot more time to visit and look around and really form an opinion of your lovely country. Right now the only thing I can say is that I am greatly impressed by the little that I have seen," the star of To Sir With Love said at the Sheraton-Kingston yesterday.

Poitier came here to place his nephew at the deCarteret College in Mandeville. His nephew, Dennis Poitier, arrived in Jamaica a week ago along with Mr Poitier’s secretary, Miss Diane Johnson, who had made preparation for the boy’s entry to the school.

Poitier was in Mandeville for the major part of yesterday. When he returned to the Sheraton, he was met by autograph seekers and admirers who filled the lobby of the hotel and elbowed each other out of the way to get a look at him.

“Everything is a mad, mad rush,” he said, as he checked out shortly afterwards to catch a flight to Miami.