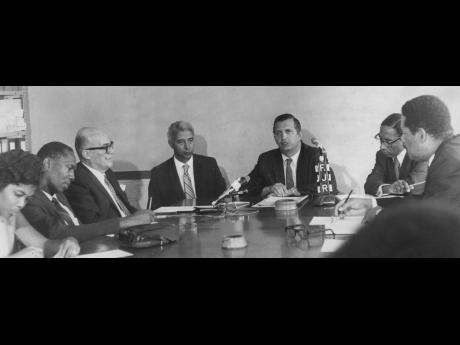 The Jamaica Mortgage Bank was formally launched at the Ministry of Finance and Planning on January 20, 1972. The minister, Edward Seaga, is seen speaking at the news conference held to mark the occasion. With him (from right) are Michael Fray, general manager of the bank; Horace Barber, deputy financial secretary; Harold Milner of the Ministry of Finance, a director of the bank; Oswald Dunn, chairman of the board of directors of the bank; and William Wilson of the Bank of Jamaica, another director.

Jamaica Mortgage Bank began operations with $14 million. The institution was mandated to provide support for middle-income residents with interest in condominiums as this was an impossible reach for most.

In launching the bank at a news conference yesterday morning, the Minister of Finance and Planning. The Hon Edward Seaga said that the $14 million, which has been finalised so far and supervised by the Government of Jamaica, $1 million; the Commonwealth Development Corporation, $2 million; and the United States Government, through the Agency for International Development, $7 million.

Seaga told the news conference that apart from the negotiations now under way in respect of the $40 million additional funds, other sources of financing were still under investigation – notably the Inter-American Development Bank, which was expected to be the prime source from which funds would be obtained on a low-interest, long-term basis to sort the needs of the low-income market.

He said that the funds that had been raised so far would enable loans to be provided on a 10-year to 20-year basis for higher cost and middle-cost housing units, and 25 to 30 years for lower-cost units.

With regard to units costing $10,000 to $16,000, the bank would give emphasis to condominium units for middle-income residents since it is also almost impossible to obtain mortgage money for this type of unit on the market today.

Low-cost housing, Mr Seaga said, was categorised here as housing costing less than $6,600, and it was in this category, in particular, that it was hoped to interest such organisations as the Inter-American Development Bank in providing low-cost mortgage money for long-term periods in order to enable this particular area to be properly financed.

“In the meantime,” Mr Seaga said, “the Bank will set aside substantial portions of the resources especially those which have been obtained from the Agency for International Development together with some Government funds for the purpose of financing private-sector development in the low-income area.

"This will particularly facilitate building societies developers of low-cost schemes and co-operatives, especially non-profit co-ops and other types of institutional builders who cater to this particular income sector."

Seaga disclosed that the Jamaica Mortgage Bank intended to issue mortgage bonds – and the type of money instrument that would help to mobilise walls in the community and would serve as a vital instrument in helping to mobilise money for the mortgage market.

He also announced that the Bank intended to devise a new type of mortgage instrument that would stagger mortgage payments on the basis of future earnings.

“Instead of having a prescribed mortgage payment calculated over the life of the mortgage on an even basis.” Mr Seaga said, “it will provide mortgage payments on a basis of lower amounts in early years and higher amounts in the final years so as to take advantage of the higher income which the applicant will be obtaining at a later stage in life.”

The Bank will be operating in two main fields – primary mortgage and secondary mortgage - and $10,000,000 has been set aside to enable the secondary – mortgage ‘window’ of the bank to come into operation on a substantial basis. The initial amount allocated for primary mortgages is $26.5 million.

Seaga said the secondary mortgage “window” was intended to encourage more institutions not now active in the mortgage field to get into providing mortgage money on the basis that they could get out as they desired and to provide a greater curriculum of mortgage money within the institutions that now provided funds of this type.

The Jamaica Mortgage Bank will have as its preferred clients commercial banking institutions – a preference directed by policy in order to enable the mortgage bank to serve also as a means of controlling liquidity.

The minister stated that as a matter of policy, the bank would look at the question of money for rural development as against urban areas and would give weighting to rural area schemes so that they would not suffer by virtue of their location as they are at present.

Present at the news conference were Mr Oswald Dunn, chairman of the board of directors of the bank; Mr Michael Fray Wilson and Mr H.W. Wilner, directors; and Mr Horace Barber, deputy financial secretary.

J. Firmston-Williams of the Commonwealth Development Corporation is also a director of the Bank.